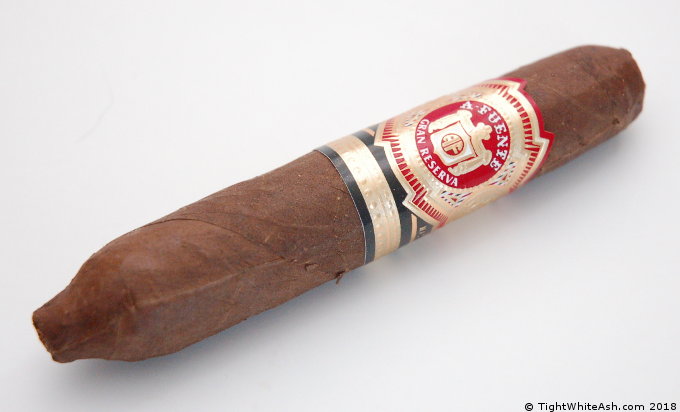 Sometimes you want to enjoy a quality cigar, but don’t have the 1-2 hours required to fully experience a normal sized cigar. I’ve dabbled in cigarillos, but never felt they delivered the full cigar smoking experience. Enter the Arturo Fuente Hemingway Short Story. This little guy can be burned down in under an hour, and it’s every bit a cigar. Not a cigarillo, and made from long filler tobacco like a regular premium cigar. 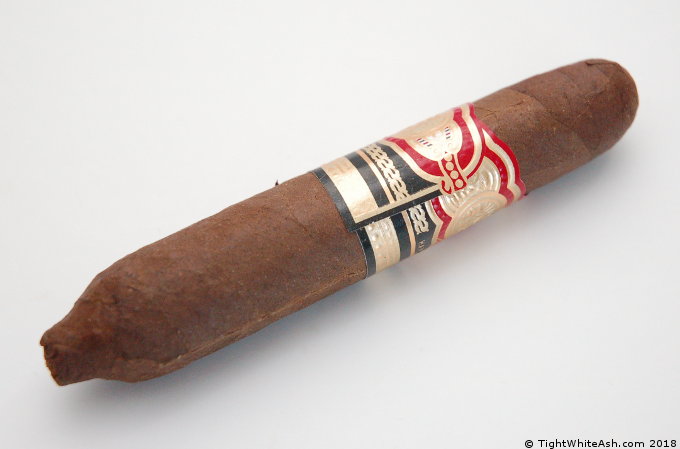 I typically like to smoke cigars during the day, and I find these are perfect when I’m trying to squeeze in a smoke after a busy day before the sun sets. While I have the luxury of a little time today, but this is the last one in a 5-pack I purchased, so it’s time to put together a review.

The Short Story is about the length and thickness of my middle finger. It’s an attractive small cigar in a perfecto shape. Lots of time these are slathered in cigar glue, but my particular specimen isn’t that bad.

It’s tightly wrapped, with mostly invisible seams. There are a number of veins criss crossing the milk chocolate colored wrapper. An open foot is counterbalanced by a triple cap. The cigar feels evenly packed. It’s a small cigar but still feels light for its size. 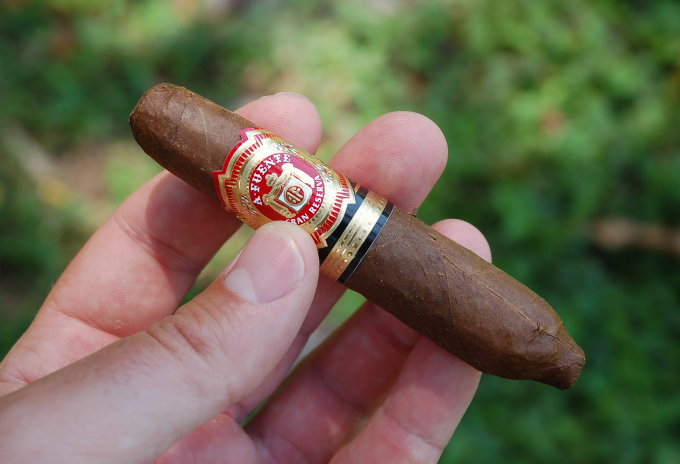 Smelling the wrapper I get plenty of spice, earth, chocolate, hay, and barnyard aromas. I receive similar flavors from the foot. I gently clip the cap and take a cold draw. I’m greeted with flavors of spice and graham cracker. I start toasting and light her up. It doesn’t get much to get it going.

On the first draw the predominate flavors are nuts, and wood and cream. The cigar gets complex right out of the gate, and a whole host of flavors swirl in. It’s hard to describe right now but I’m sure I will be able to tease some apart over the next few puffs. All I an say for sure is that I like what I’m smoking. Lots of nuts, graham cracker, cream, earth, sweetness, baking spice, and a little pepper. 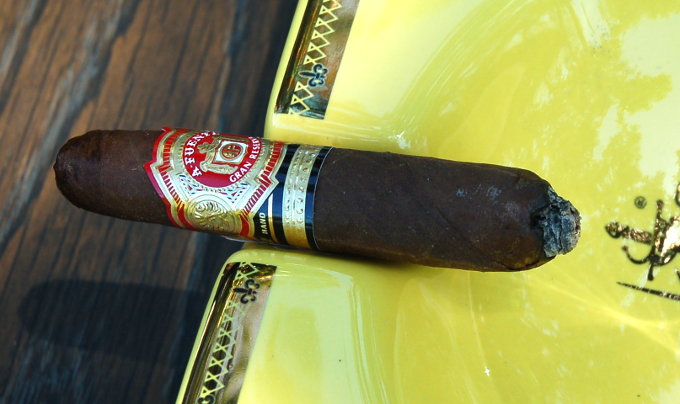 I’m getting good smoke output, but not a lot trails from the foot when I rest the Short Story in my ash tray. That has me concerned that I’m letting the cigar go out, but with each draw it comes back to life filling my mouth with an abundance of gray white smoke. I feel like lately I’ve been smoking my cigars on the faster side, so I’m trying to exercise a little discipline, Still, with a perfecto like this I want to make sure I get a good cherry developing so it stays lit.

The aroma I am receiving is delicious. It reminds me of peanut butter. A sweet and nutty combination that hits the spot. 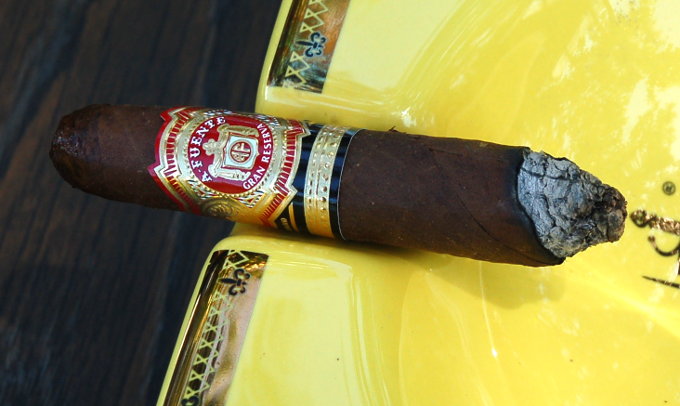 Black pepper is building on the draw flavors. Still getting cream, nuts, and sweetness. A great combination of flavors. Medium body.

It’s June in Florida. We have been receiving tons of rain, and plenty of sun. The back yard has exploded. We need to mow on a weekly basis now, and really we could do twice a week given all the knee high shoots coming up. The sun is out in full force, but the combination of shade and a light breeze keeps things comfortable.

Our Hemingway Short Story is already picking up transitions. I’m getting slightly darker flavors now. Toast, light coffee. It’s all backed by nuts and cream and punctuated with black pepper. It’s not a heavy amount of pepper, but there is enough to keep things interesting. 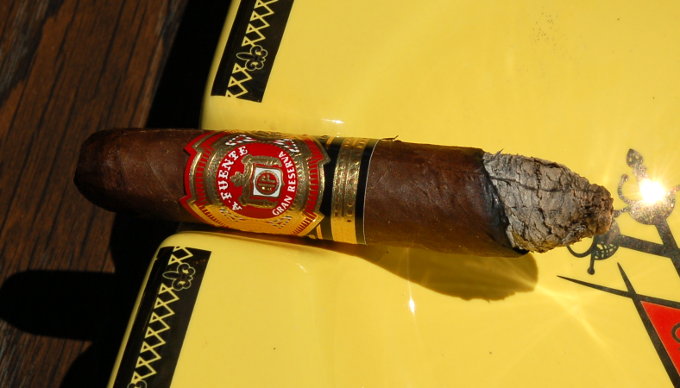 The burn on my cigar is a little wavy. Nothing crazy, but not razor sharp either. A light gray ash is forming. It’s firm and tight.

Another transition. Some tangy cedar is forming. The aroma is heavenly. Sweet, nutty, and lightly spiced.

The burn is a little uneven, so depending on what side of the stick you look at, we are at the 2nd third. I give the trailing edge a light touch up to keep it moving along. While the first third took 20 minutes, the cigar is conical and I’ll be surprised if the entire smoke takes an hour. But maybe it will. I tend to smoke my review sticks a little slower. Leaves more room for me to bang on the keyboard. 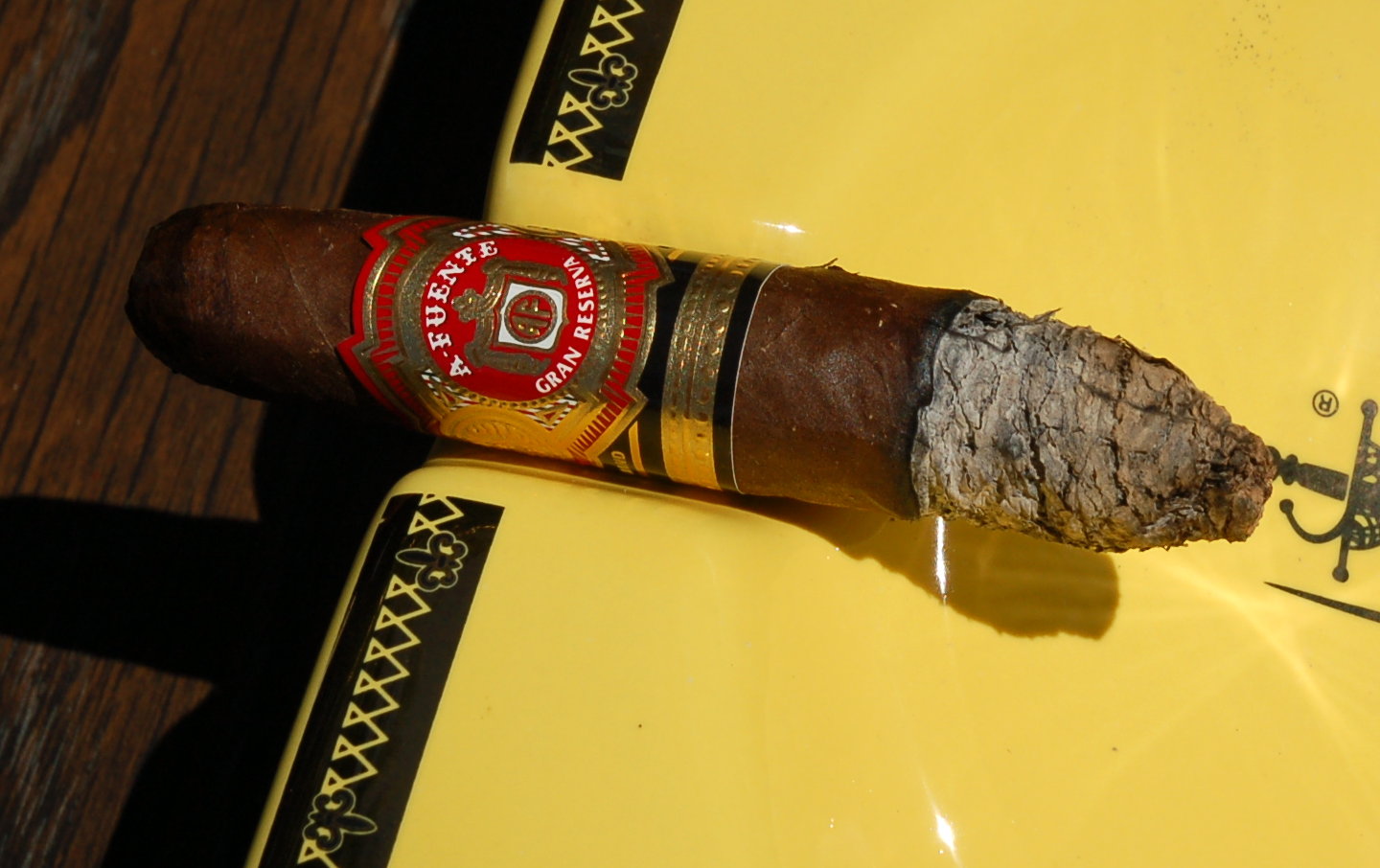 The flavors continue to morph on the Short Story. I’m getting a stronger wood note, and the tanginess is fading away. Still getting cream, still getting pepper, now in the back of my throat and on the retrohale, and still getting nuts. But the cigar is maturing. The nuttiness is deepening into a roasted flavor. A little strength is creeping in. Surprising given the diminutive stick, but I feel my head swirl slightly.

The ash is hanging tough, but leaning a little to the right. The band is loose and gets in the way. If I wasn’t taking photographs I would have pulled it off. That tangy flavor is creeping back in. 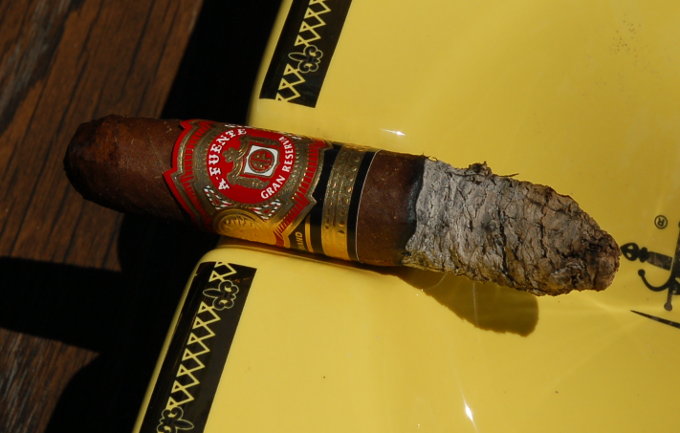 Hard to say if it’s tangy cedar or citrus. But somewhere in that neighborhood. Still enjoying many of the flavors from the first third. The pepper is stepping up. Especially on the retrohale. The breeze shifts and I get another whiff of that sweet nutty aroma.

The Short Story is slowly burning down. It’s getting close to the band so I slide it off. We have another transition. It’s a deep sweet woody flavor. What is remarkable is that the dominant nutty profile from before has backed away. The smoke has an entirely different taste in the mouth now. It’s amazing that so much can be done with such a small unassuming cigar. Coffee is now coming onto the train. It’s building speed and intensity, hurtling down the track. 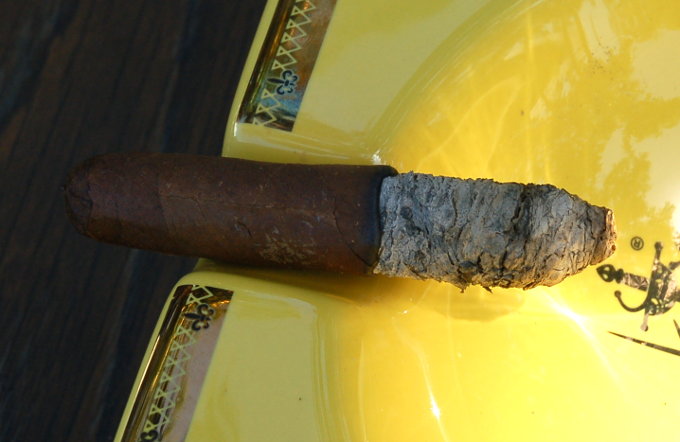 We are around the halfway point, and we have gone from a nut dominant cigar, to a coffee dominant cigar. It’s as if the wind shifted and the entire cigar has taken a different tack. Oddly enough the aroma is still nutty and sweet. But the draw is light coffee and cream, While the finish is a deep, almost fruity coffee bean.

The burn is now razor sharp. Smoke output is at an alltime high as the cigar narrows with each puff. My original ash is still hanging on. I’m sure it will drop any moment onto my lap.

The flavors are coffee, wood, cream, some tangy cedar, coffee bean, a little nuts, and earth.

The ash gracefully gives way as I raise the cigar from the ash tray. We are down to the final third.

Smoke time is 50 minutes. Way longer than usual. I suspect it’s because I’m reviewing the cigar and using an ash tray.

And frankly this is the way to experience the Short Story. It’s a smaller smoke that I often rush, but it should be savored like any full size stick. Treat it with that kind of respect and it will reward you with a cadre of flavors. I’ll step off my soapbox. I think the nicotine is getting to my head. 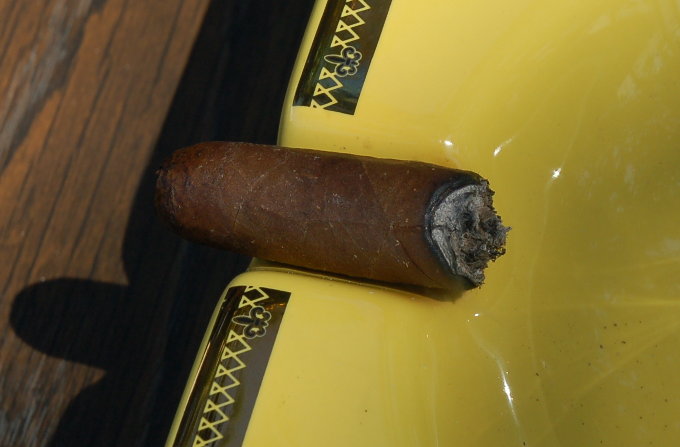 The flavor is dominated by coffee, but it’s not a bitter cigar at all. In fact, I’m noticing some chocolate notes now. A mochachino if you will. Fancy.

The burn has gone cattywampus once the ash fell off. I give the high spot a slight toasting with my torch lighter and it quickly regresses to the mean. 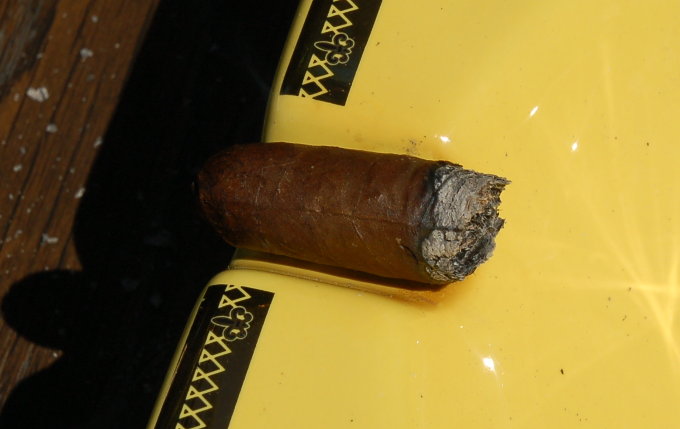 The flavors are predominantly black coffee, chocolate, pepper, and a little cream for balance. It continues to be a nice smoke. It’s not sweet, but it’s not bitter. Very even keeled in that respect. It’s a great way to enjoy the late afternoon. The sun is still high, and the wind rustles the palm trees. Overhead a lone Osprey circles, riding the thermals as it stalks its prey. The verdant green of early summer in Florida is tough to match, but the heat may leave something to be desired. Fear not, as it will only get hotter.

Coffee continues to lead the pack with the final third of our Hemingway Short Story. Still not a scintilla of bitterness is present. We are approaching the nub, but as long as it smokes cool and clean I’ll continue to smoke it.

Tangy cedar comes back for another run. It compliments the coffee. The creaminess has mostly melted away. Pepper remains on the retrohale. 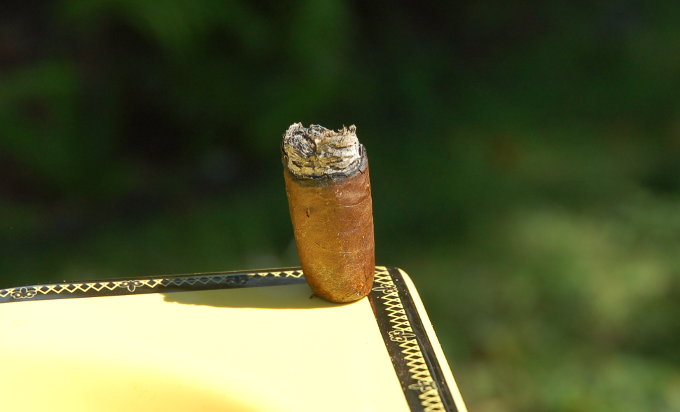 As we get inside the final inch the smoke grows warm. At an hour and 10 minutes in I’m on borrowed time here, so I’ll end it on a high point.

The Short Story has been in the Fuente arsenal since the Eighties. It’s easy to see why this cigar has stood the test of time, even in a world of small batch and boutique offerings. There is a certain sense of novelty to the cigar, with its short perfecto profile, but this is a serious smoke for those not wanting to commit to a full size stick. Beautifully constructed, and jam packed with flavors and transitions, it is a smoke both novices and season cigar smokers can enjoy. Its the kind of cigar that I would always like to have on hand. You can’t go wrong with the Short Story, and many times it’s that perfect stick when you have under an hour to burn. My cigar ran a little long, but usually these peter out around the 45 minute for me.

The price point on these ranges from $4.5-6. It may not seem like much tobacco for the money, but construction is consistently great and you can’t argue with the flavors. I think you get what you pay for.

I would give it a “2” on my 0-2 scale. Boxworthy. They age well if you can keep them in your humidor long enough. I suspect the next time I re-up I’ll need to do better than a 5 pack, or consider investing in some other quality short smokes.