I picked this cigar up because it was the highest rated cigar on Blind Man’s Puff, a cigar review website that does blind reviews (reviews where the bands are removed and the reviewers have no idea what they are smoking). Very cool. I figured if their panel of blind reviewers enjoyed this stick it was worth checking out, as they were a finicky bunch. You can check out their review here. 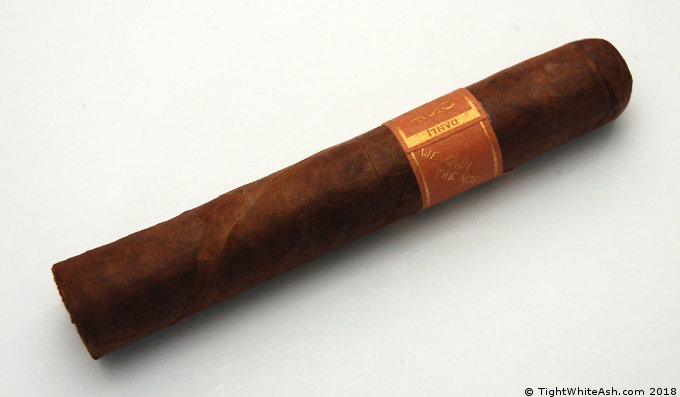 This is my first review of a cigar by the Caldwell Cigar Company. Here is a link to their product description for the Blind Man’s Bluff. It doesn’t give you a whole lot of info on the cigar, but it’s better than nothing.

I bought a 5 pack of these off c-bid in January. I smoked one after a month and wasn’t too impressed. It was very subtle. At this point they have been simmering for 7 months. Lets see how it smokes.

I kept these in the cello, and I’m noticing some yellowing where the cap meets the cellophane. Nice. I gently remove the cigar from its protective wrapper. It’s a handsome stick. The wrapper is a toasty brown with a soft sheen. The lightbox shots were done with the wrong camera settings, so check out the natural light ones. The seams are near invisible. There are plenty of fine veins running across the length of the stick. There is a nice triple cap. The band is subdued but fun. This is an attractive cigar. 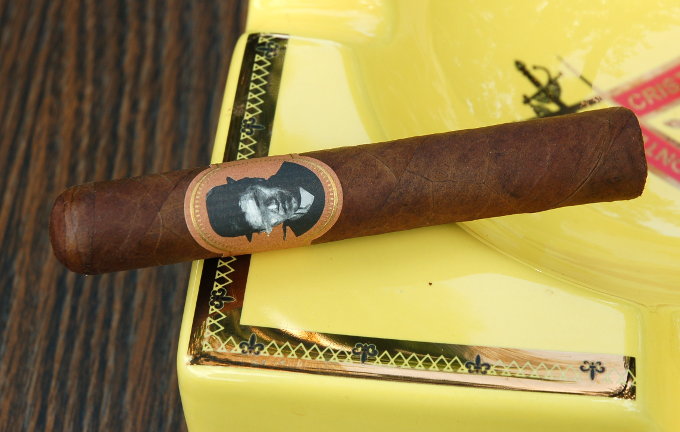 I sniff the wrapper and am greeted with a deep barn yard aroma. Hay, earth, and cedar join in. From the foot I get hay, earth and cocoa.

I misplaced my Xicar cutters. Probably when I went fishing. I use my little plastic back up cutters and snip off a small portion of cap. I take a test draw. It’s free and easy with flavors including cedar, graham cracker, and baking spice. I start toasting and light ‘er up.

First puff and I get some baking spices. Second puff and I get whacked with red pepper. Hot across the tongue and strong on the retrohale. Nice. Third puff and I get a little cream, plenty of pepper, and a nutty finish. I sometimes have trouble detecting flavors on the first puff or so. It’s good to see this one make a statement from the very start. 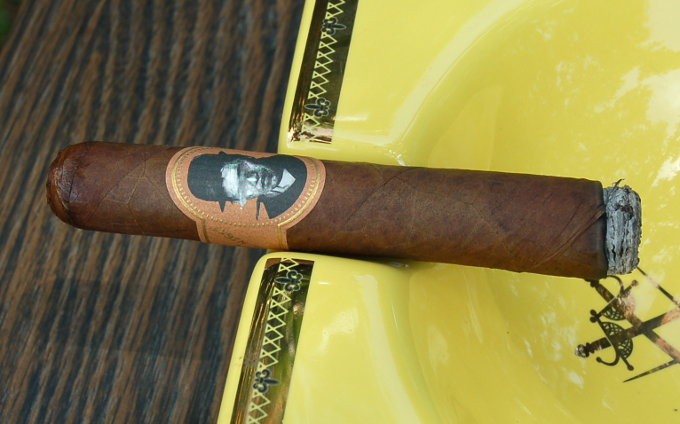 After the first few puffs the flavors build out. That pepper is accompanied by some all spice. I’m getting some toast and graham cracker as well. Still a boat load of pepper. The cigar has started out as a solid medium bodied smoke.

As usual I’m sitting in my back yard. We have been putting some major work in here keeping things trimmed back. Summer in Florida is hot and wet, and we have every shade of green known to man back here. The trick is to keep it from being overrun. Yesterday was basic mowing, edging, and blowing. This morning was selective pruning and weeding. It’s nice to sit back and enjoy it all for a minute. Here’s a shot so you can see a little of what I’m working with:

The picture does it little justice, but that’s the sunny part of the yard. It’s a work in progress, and I guess what I see is the potential. Those leafy palms by the fence line are new, and the idea is to have them grow into a high hedge. This time next year it should look pretty good.

Our Blind Man’s Puff is burning quickly. 5 minutes or so in, and half an inch of snow white ash is forming. I’m getting hints of something fruity. Not sure what it is exactly. The aroma is of a fresh baked sweet bread. It’s a nice cigar. Doesn’t grab you by the balls, but it’s a pleasant blend of flavors. The strong pepper keeps me on my toes. 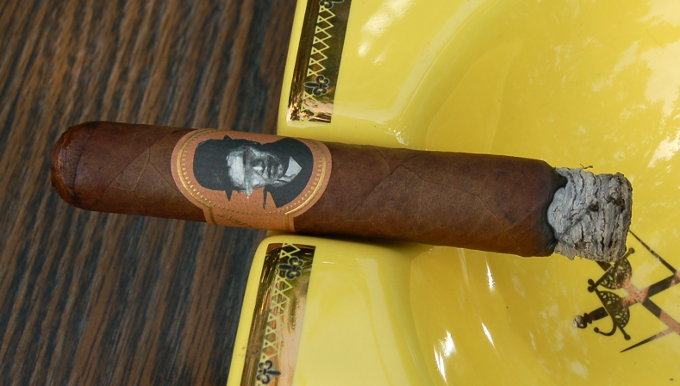 The burn has been pretty good. A little wavy, but nothing requiring a touch up. A few minutes later the burn evens out to near razor sharp on its own.

I think the fruit I’m tasking is apricot. Light and sweet, it plays nicely with the pepper, bready, and nutty notes. The cream has backed out a bit. Exotic spices tease at the periphery of my palate.

Clouds have rolled in overhead. Yesterday I had a cigar on my neighbor’s back porch. They are gone for the summer and let us use their pool, which is enclosed and includes a large awning. We don’t have much in the way of cover at our house, so with the threat of rain I posted up at their place with a Room 101 Uncle Lee and Lee Iacocca’s biography. Both the cigar and the book were excellent. 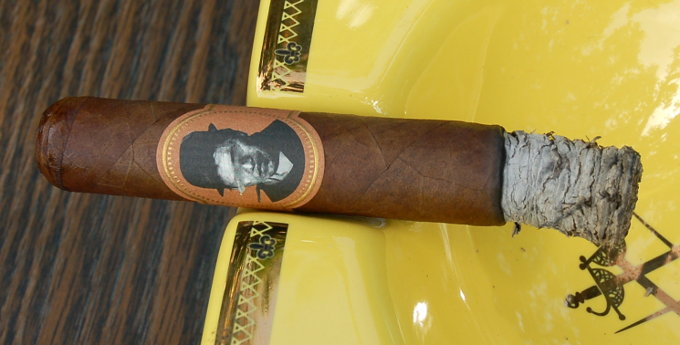 We are nearing the end of the first third. This could be a fast smoke. Flavors are largely unchanged. Good amount of pepper, nuts, bread, graham cracker, spices, and the apricot threads in and out. Mostly on the retrohale. The burn is near perfect and the ash is hanging tough.

Smoke time is a little over 20 minutes. The ash falls off in a solid chunk.

There is a light breeze this afternoon. It’s welcome as we are at over 90 degrees here. We have a trip to New Orleans at the end of July, so I’m trying to spend some time outside to get my body acclimated to the heat. New Orleans in July will be hot as hell, and my desk jockey job has me rarely seeing the sun, let along facing the crushing heat of a southern summer.

Flavors continue to be consistent. Dry roasted peanuts are building up, and vying with the pepper for top dog status, but it has a way to go. I also taste a little light coffee coming in.

Here is another shot of the unlit cigar: 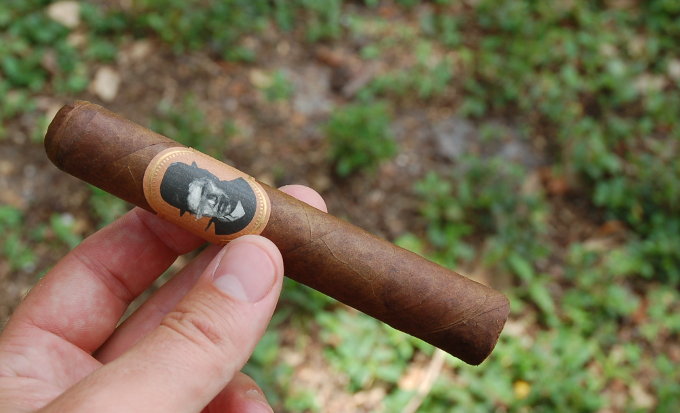 The burn goes marching on like a steady stream of ants. It may get a little wavy at times, but quickly self corrects. The cigar hasn’t required a single touch up at this point. Knock on wood.

And speaking of ants, if you haven’t seen the YouTube Channel AntsCanada you should give it a watch. It’s the most oddly fascinating thing I’ve seen on the internet in a while.

Back to the cigar. I’m getting some woody elements now. The coffee is building a little. It’s muddling the apricot flavor, which is fading away into more of a sweet tea on some puffs, but back to apricot on others.

It’s good to see some transitions in this stick. Some folks like consistent cigars. Personally I like the cigar to twist and turn. That keeps it fun, especially if I’m going to concentrate on it for a review. I suppose it matters less if you are mowing the yard or fishing.

The aroma continues to be of sweet spicy bread. I love the aroma of a good cigar. Butterflies chase each other around in the distance.

The sweet tea flavor in this cigar has picked up dramatically. The pepper has backed off substantially. We are now also getting chocolate. Very cool. I am digging this Blind Man’s Bluff. 6+ months of rest has done wonders for this cigar.

The entire sky is blanketed in thin gray clouds. Darker clouds are forming on the horizon. Still it looks like we are getting full sun. It’s not overcast at all. 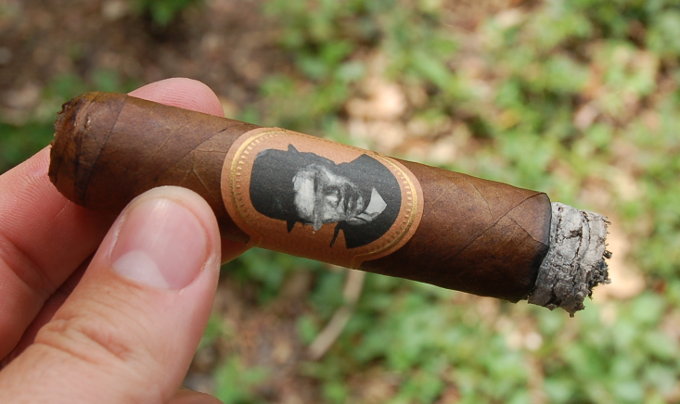 Here are the flavors now: sweet tea, apricot jam, chocolate, pepper, light coffee, wood, and light nuts. It’s an odd combination. Perhaps the cigar will continue to darken in its flavor profile as we near the final third. We are getting close. Maybe a quarter of an inch away.

Something interesting about the cigar is that it puts out plenty of smoke with each puff, but has very little in the way of resting smoke. The burn continues to be good. It’s a little wavy at present, but still doesn’t need a touch up. 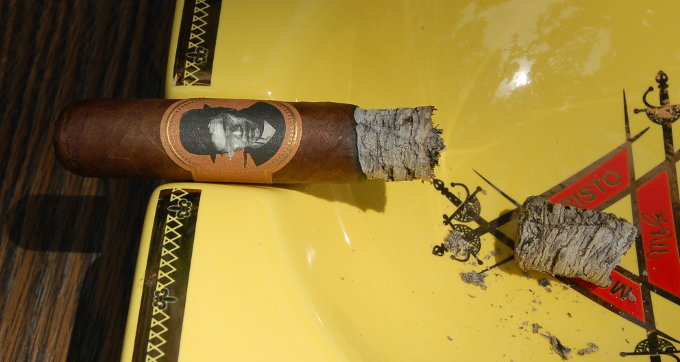 The sun is shifting and the keyboard of my laptop has become engulfed in direct sunlight. Sweat pours down my face. Try as I might to acclimate, us Italians weren’t designed for Florida. I should probably be on the Jersey Shore now, or eating a pizza in the old country.

Without warning the cigar went out completely. Fuck. Maybe I was pecking away too much. I take the opportunity to shift my set up to a shadier part of the yard and let the cigar cool. I knock away the ash. We are at the final third anyway, so lets get started… again.

Smoke time is at 50 minutes.

I fire the Blind Man’s Bluff back up with my torch. Flavors are darker upon relight. I’ll let it rest and peel away the band. It pops off easily. A relief as I could see the wrapper dotted with glue. 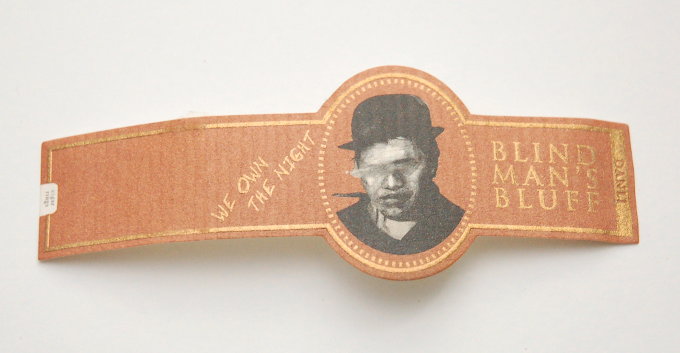 I’m facing east, and can see dark clouds coming in low and fast. This may be a race against the clock. Overhead wind blows ominously. Not much wind down here on the ground thankfully. 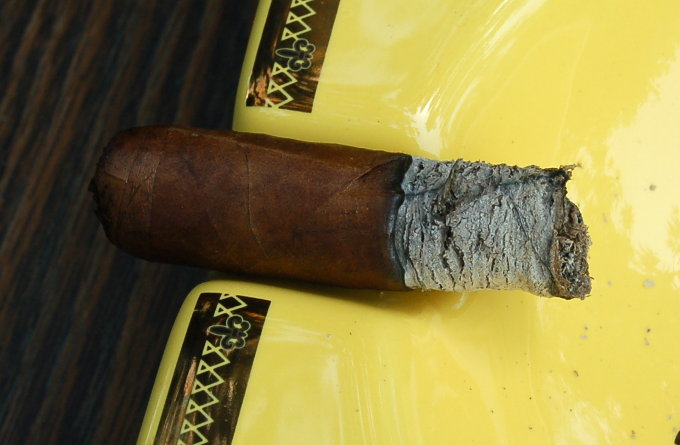 I’m detecting some secondary flavors now that the cigar has settled down from the relight. Wood, toast, and a little all spice. Yes, the flavors have darkened as we get into this final third.

10 minutes later and not much has changed. We have an inch and a half of cigar left. The nub is slightly squishy and the smoke is growing warm. Still smooth and enjoyable. Not bitter at this point. There is a tiny crack in the wrapper. We still have some smoking left to do, but wonder what this Blind Man’s Bluff has left for us.

The tea has faded and the coffee is building with some dark chocolate undertones. Pepper is still present. Bitterness is coming in as we approach the nub. As I continue to puff, tea wends its way back into the blend. As the cigar burns down I hear thunder in the distance. With an inch left the cigar goes out on its own. 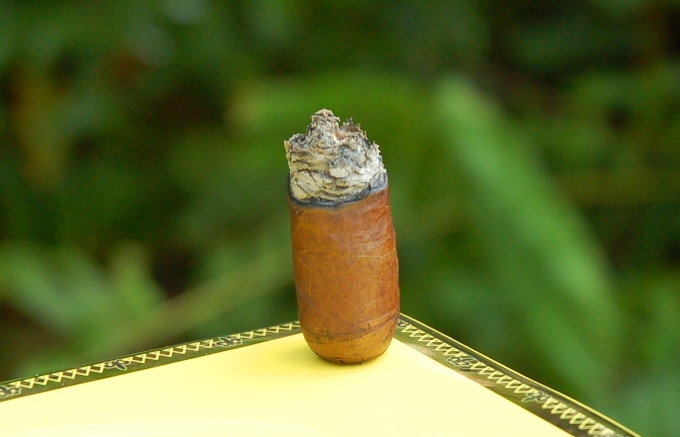 Rain starts falling gently. I’m going to stop the review here. Timing is everything, and in this case I’d say the Blind Man’s Bluff hit the mark.

This cigar was pretty good. MSRP is $7.50 but I got this stick for about half that off the auction site. At that price there is a lot to like here. Even at retail I’d say it’s a good cigar for the money, but it does burn quick and I prefer a more complex cigar. There isn’t a ton of complexity, and the transitions are basic, but it offers a nice core of pleasant flavors and it does have a few tricks up its sleeve. It’s a beautiful cigar and except for that one random relight it burned flawlessly. There is a lot to like here for a casual smoker not wanting to break the bank or their brain.

All said this was an enjoyable medium bodied stick. Not a whole lot of strength to it, but my brain is swimming in a mild nicotine buzz. I’d say this is a good introduction to Caldwell Cigars and a good morning cigar. I enjoyed it, and would buy another 5 pack at the right price. I’d skip the box for now.