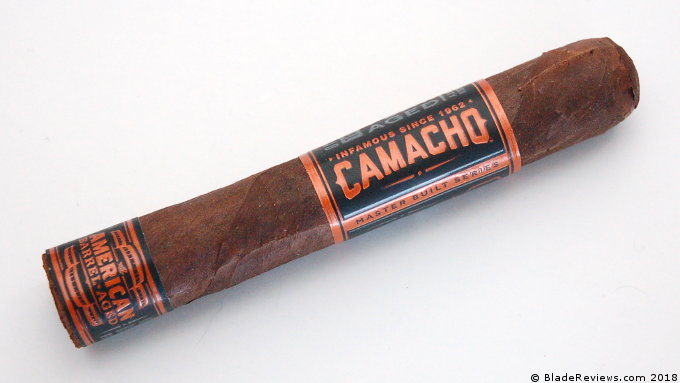 Guys, I bought this cigar because I thought it was interesting. It’s a cigar blended mostly from American tobacco, including filler tobacco that was aged in Kentucky bourbon barrels for 5 months. I’m not a huge fan of the billboard style advertising Camacho now uses for its wrappers, but the Barrel-Aged schtick was intriguing enough to seek out some cigars for review.

I had a couple a month or two after I purchased my 5 pack, and they were pretty good, but didn’t smoke great and I thought they could benefit from some rest. I haven’t tried one recently, but at this point my remaining cigars have rested in my humidor for over 6 months now. If they aren’t ready now then that will say something.

The cigar is mostly covered in two cigar bands, but from what I can see this is a medium brown cigar with a very toothy and “rustic” wrapper. It has a dull sheen to it, as if the cigar was dunked in shellack. Parts of my wrapper have little scratches on it, as if this stick was entered into a cat fight. That’s odd as I have kept the cigar in its cellphone wrapper. There are plenty of lumps and bumps. The seams are mostly tight and there are visible veins. There is a triple cap. It’s not a pretty cigar. 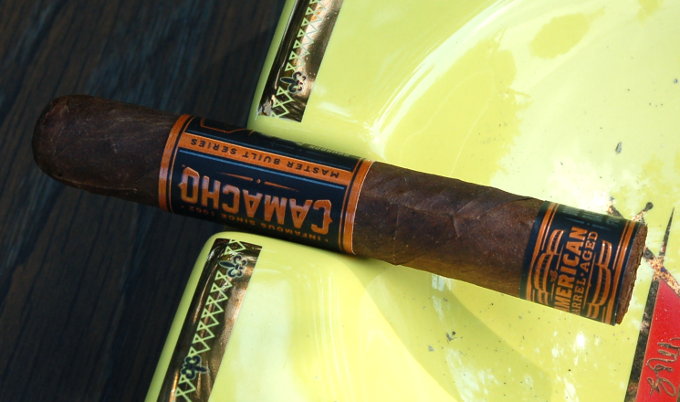 I sniff the wrapper and get a deep earthy and chocolatey aroma. Man it smells good. My brain may be playing tricks on me but I’ll be damned if I’m not picking up some whiskey notes here as well. I’m also getting a nice sweetness from the wrapper.

From the foot I’m getting milk chocolate, earth, cedar, and lots of sweetness. The thing almost smells like a pastry or scented candle. It’s very sweet. While this may not be an attractive cigar, it smells fucking great. If it smokes half as good as it smells I think I’ll be in for a treat.

I clip off the cap and take a test draw. Oh crap, the draw is really tight. I test the cigar for firmness with my thumb and fingers. It’s hard right by the head. Shit. I clip off a little more, and the draw opens up slightly, but not much.

If this one is plugged I’ll grab another.

I peel off the foot band and start toasting. Start time is 4:34 P.M.

The draw is tight but I’m able to produce a good amount of smoke. I’m getting a little cream on the front of the palate, some chocolate, and definitely an alcohol flavor. I can taste the bourbon on the first couple puffs. The finish is long and woody. Lots of wood on the retrohale as well. Oak. The aroma is sweet, like an old fashioned. Besides the tight draw, the first few puffs are a great start. 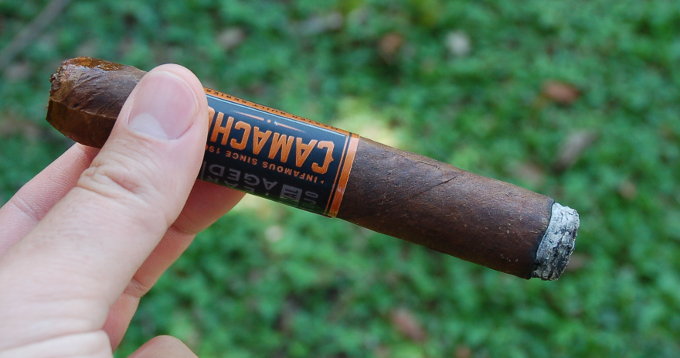 After 5 minutes or so pepper begins to appear. Black pepper, mild but present. I’m getting some complex flavors here. It’s that whiskey. It’s weaving in and out. Oak, caramel, earth, vanilla, and a little smokiness.

The aroma is amazing. I’m getting a pronounced sweet whiskey flavor with bread and malty notes. As the breeze shifts it whacks me in the face. Beautiful stuff.

10 minutes in and the burn has been excellent. Razor sharp. The ash is a salt n’ pepper gray.

For a few puffs on the retrohale I’m getting a sharp almost alcoholic flavor. That flavor and the mild pepper help clean the sinuses. It’s odd but present.

A little chocolate has come back. It plays nicely with the oak, pepper, caramel, and charred smoky flavors. Cream weaves in and out on the draw as well.

Speaking of draw, the draw on this cigar has loosened up a bit. That’s great, as I’d rather not smoke my cigar through a garden hose.

So far strength and body have both been at a medium. So far it has been a pleasant cigar with some unique characteristics to it. The barrel aged tobacco really adds something to the blend, and it’s not a gimmick.

And that aroma is something else. As usual I’m smoking outside, and when the breeze shifts and I get hit with the aroma it kicks the experience up another notch. I’m getting maraschino cherries now out of the aroma. It’s unreal.

30 minutes in and we are burning slow. Only an inch. At this rate we will have close to a 2 hour robusto on our hands. I selected this over a Flor De Las Antilles Toro because I wanted a slightly shorter smoke. Oh well. No where to go on this late Sunday afternoon, so I’ll keep chugging with this American Barrel Aged.

The second third begins with me dropping the ash right into my lap. I was measuring how far it had burned. Each third is about 1-1/4 inches and we are right about to the second third. 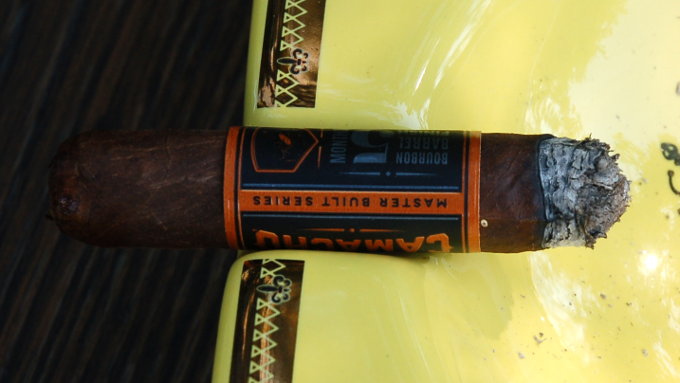 The flavors are continuing from the first third. No major transitions, but we are getting cream, oak, darkened caramel, a little chocolate, charred flavors, earth and pepper. Still getting that alcoholic flavor on the retrohale with pepper and oak. It’s like taking a deep sniff from a glass of bourbon. To me it reads a little more like cognac but I’ve been drinking a lot of cognac lately. It’s probably more like a sweet bourbon.

It’s a unique flavor profile, but has been largely consistent so far. Nice flavors, and a smooth blend so I’m not complaining.

After the ash dropped our burn has gone slightly wavy. Nothing to get excited about and I expect it to correct itself with time.

That aroma continues to steal the show with elements of maraschino cherry, sweet bread, caramel, and vanilla. It’s like a smokey Manhattan. I wish I could bottle it. 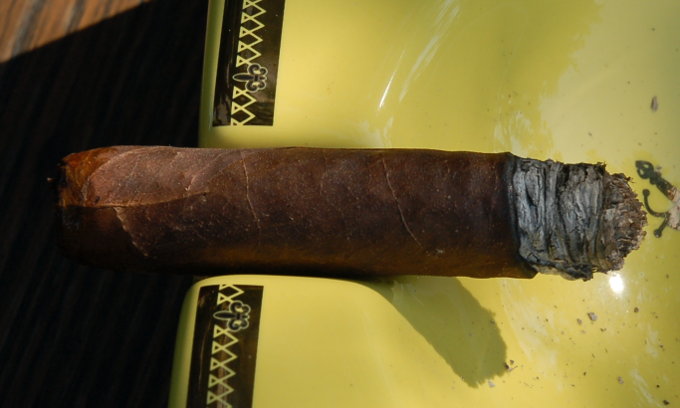 The burn never fixed itself so I give it a small correction.

We are an 1/8″ away from the billboard band. I gently peel it away, starting near the cherry of the cigar. It comes off with some coaxing. I didn’t think to snap a picture before doing this, so I apologize if the remaining pictures aren’t that interesting. We still have a lot of smoking left to do. 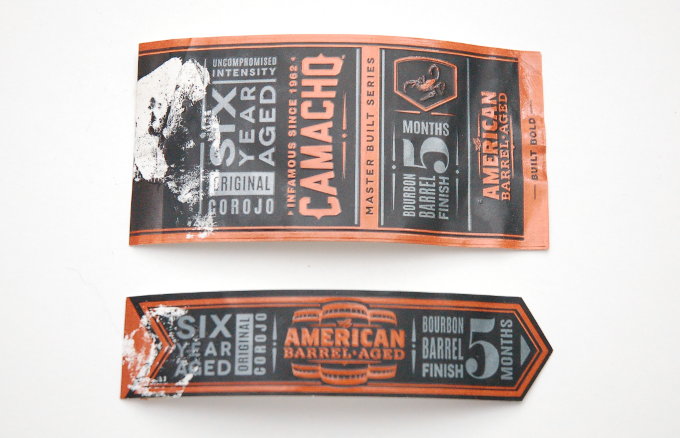 The bourbon notes on this cigar are subtle, but I think it’s remarkable considering this isn’t an infused cigar.

An hour in and the flavors haven’t shifted much. The oak has picked up, and it’s becoming a little sharp. Beyond that it’s the same flavors as before. Again that’s not really a bad thing given the nice and unique flavor profile.

The second chunk of ash falls off. This time into the ash tray while the cigar was resting. As God intended.

At the final third we are getting some tunneling. Smoke output wanes. I help the cigar along by carefully torching a thin strip of the wrapper along the burn line. That seems to get it back in gear. 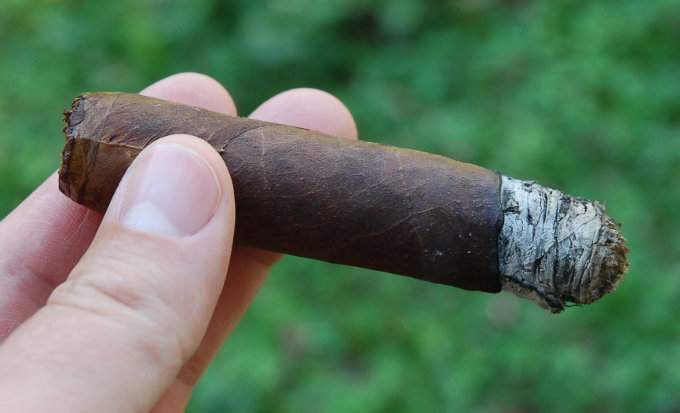 The pepper has faded away. The sweetness has died down as well, but it’s still heavy in the aroma of the cigar. I’m getting that bourbon flavor still, and it’s quite pronounced now and front and center on the palate. It’s accompanied by oak, charred wood, and earth.

On the retrohale there is plenty of charred wood, a tingle of pepper, and a small amount of sweetness.

The body has yet to stray from medium on this cigar.

A few puffs later and the sweetness is back along with the bourbon. The retrohale continues to deliver that experience of taking in the aroma of a glass of bourbon. I’ll probably have a finger or five of Four Roses this evening as I edit the photos for this review. Why not? 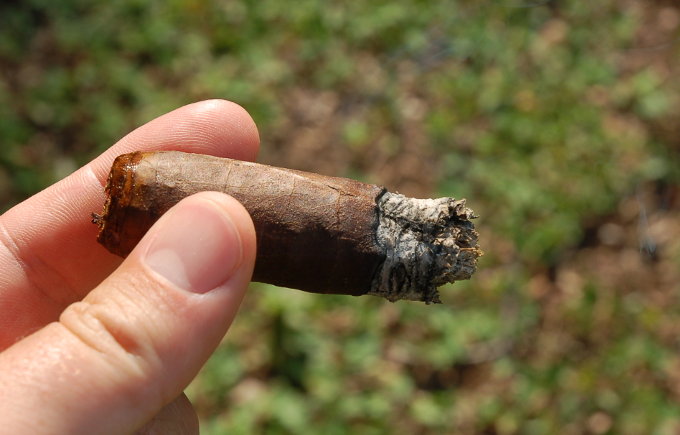 I’m not writing as much as I usually do for this review, because I don’t have as much to say. The cigar has been consistently good. Not a whirlwind of transitions and flavors, but a good solid base of flavors.

Even the wildlife has been quiet today. It’s been a sunny day, relatively clear with a light breeze. Comfortable in the shade, but hellaciously hot in the direct sun.

With an inch and a half yet, chocolate flits in and out like the tongue of an alcohol infused serpent I bought in Thailand. 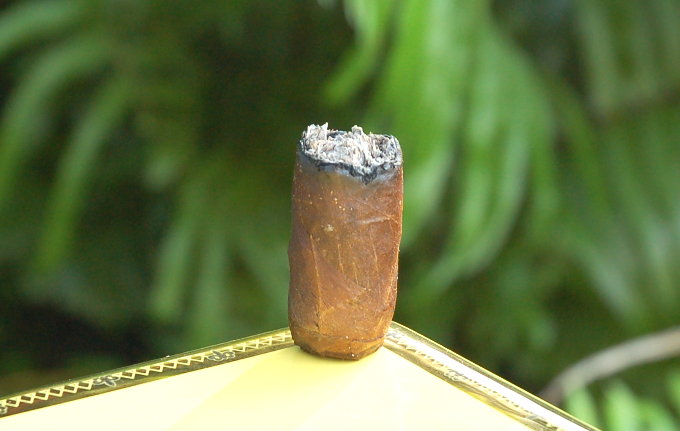 With an inch remaining the bourbon begins to wane. Pepper is gone. Earth and wood remain. Still getting a little bourbon on the retrohale but it has dialed back. The neighbors are working on their yard and a squirrel screeches at them in protest.

The smoke is growing warm and I’ve gotten over an hour and a half out of this robusto. I decide to end the review.

A cigar like this runs the risk of being a gimmick. I’m pleased to say this cigar is not a gimmick. It truly delivers on the premise of offering a bourbon flavored cigar without being infused. It’s a unique and memorable blend. Only the corojo filler leaves were given the bourbon barrel treatment, and the resulting product is a cigar that offers the smoker subtle bourbon flavor while being supported by a cadre of great accompanying flavors. And the aroma is something you need to experience to appreciate. It’s amazing.

I was concerned about how tight the draw was pre-light, and it was a little tight at first, but I’m pleased to say the cigar smoked nicely. It provided plenty of smoke. The draw opened nicely, and while I had to give it a couple minor touch ups it never went out. The cigar stayed medium bodied throughout the stick and the strength was medium/mild.

That said, the cigar did not have much in the way of transitions. To me that will keep it from ascending to sublime status, but it’s still a great cigar. Unique and enjoyable. I recommend it, and would buy another 5-pack to keep on hand earning the American Barrel-Aged a “1” on my 0-2 scale.