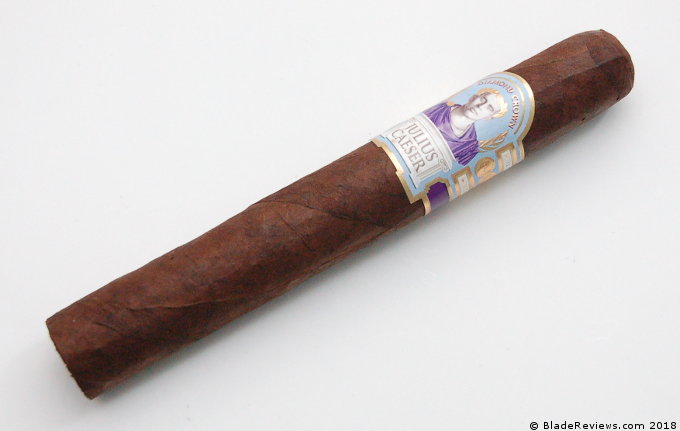 Diamond Crown has a lot of great background on this blend on their website. Basically the cigar was named after Diamond Crown’s founder Julius Caeser Newman and was introduced in 2010 to celebrate J.C.’s 135th birthday. It’s made in the Fuente factory, and the leaves have been aged 5 years. 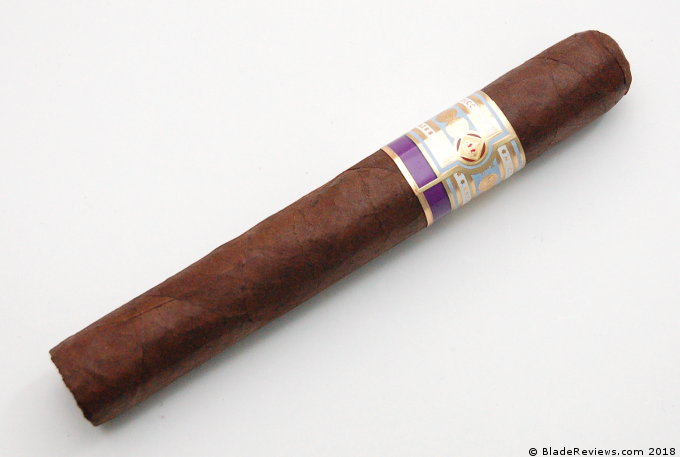 This is an expensive cigar, retailing for over $10 a stick. As usual I got these on deep discount. I paid about $7.50 a cigar for a 5-pack back in January 2018. So this cigar has the better part of a year of rest on it. I’m in the mood to smoke something high end so that’s why I plucked it from the humidor for today’s review.

Overall this is an attractive cigar. It’s a little lumpy, but the dark red brown wrapper features minimal veins and tight even seams and a triple cap. The cigar feels a little light for its size. The wrapper itself exhibits a light sheen and minimal tooth. 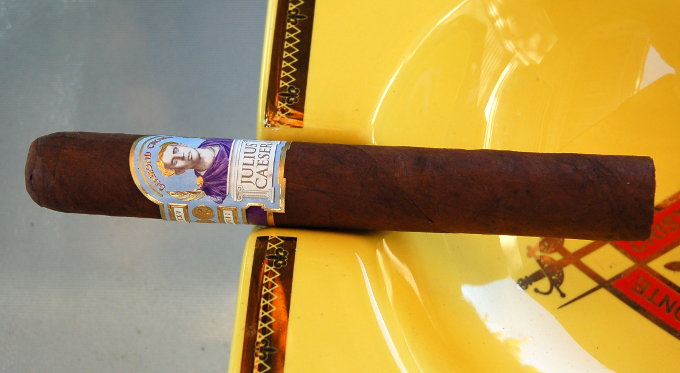 Smelling the wrapper I get a light cocoa, cedar, and barnyard. It’s not very pungent. From the foot I get light cedar, cardboard, and earth. Not the strongest of pre-light aromas if I’m being perfectly honest.

I clip the cap and take a test draw. Cedar and sweet tobacco with a raisin finish on my lips. I get to toasting and light up. 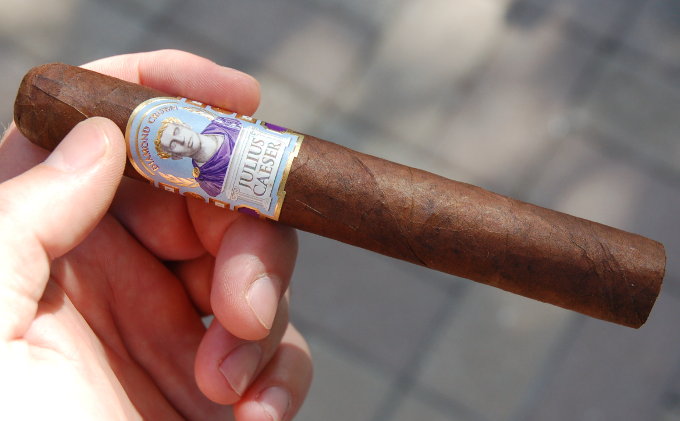 From the very first puff you can tell that this cigar is super smooth. Baby bottom smooth. Not a hint of harshness. Not even on the first puff, which is usually a jumble of strange flavors. 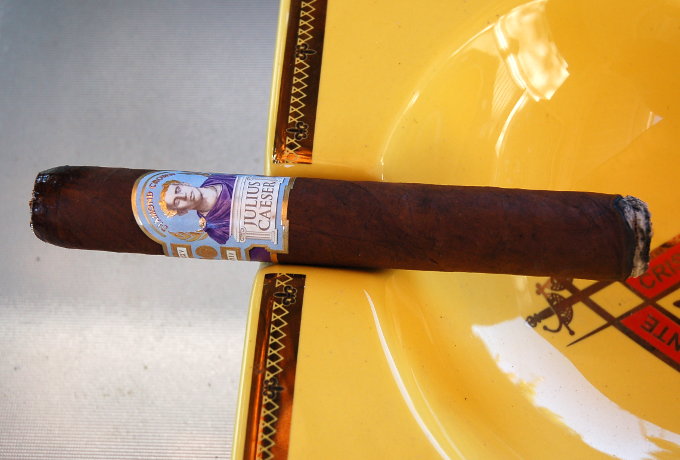 The initial flavors are cream, chocolate, light coffee, and a mild dose of pepper. The pepper is slightly stronger on the retrohale. A little earthiness permeates through the cigar. The cigar doesn’t grab you by the balls, but it’s nice pleasant start. Good flavors. I’d peg it on the low end of medium bodied for now. Lets give it a few minutes to open up.

I had a late start this morning. I was exhausted by Friday afternoon. I’ve been working every Sunday for the past month, and had a trial last Friday. Didn’t have a chance to fully enjoy my weekend after the trial as I had some significant things to prepare for, and I left a lot of it on the back burner when I prepared for trial. When you are a solo lawyer, having a trial is kind of like going on vacation. Except instead of relaxing by the pool and going out to dinner you are focusing 100% on one single file. When it’s all over you have a mountain of shit to do for your other cases as if you went out of town.

At any rate, I’m sorta caught up. So I can take this weekend off, and I’m taking off Monday for Veterans day. Gotta recharge the batteries. I’m looking forward to relaxing.

Speaking of relaxing, this Julius Caeser is a relaxing smoke so far. The flavors are similar to before, but the pepper has dialed back a bit. Very smooth with light cream, cocoa, earth and some light roast coffee. There is a little sweetness here, but not much. The retrohale is smooth and earthy. Very easy to retrohale.

The cigar is producing a good amount of smoke. The burn line is a little wavy, and it may need a correction soon. Here’s a picture:

I give it a small correction to see if it will even out.

J.C. Newman is headquartered in Ybor City, about an hour north of me. I was in Ybor City over the summer hanging out with a friend for a couple days. Fun town outside Tampa with a lot of cigar smoking. While I was there I saw the Fuente buildings. It was an impressive compound. I tried to go inside but it did not appear to be open to the public. It was a late Friday afternoon. Next time I’ll have to see if I can find the J.C. Newman building. Would be cool to go inside these facilities if they are open to the public. After all, they are more or less in my back yard.

Our Julius Caeser has evened out its burn. Huzzah. Flavors are nice. Subtle, but I’m enjoying them. Light cream and a semi-sweet chocolate are leading the pack. Can’t argue with that. Light cedar notes tease the edges of my palate.

30 minutes in and we have burned a little over an inch. It has been a slow even burn. A flaky dark gray ash is forming. I’m tempted to try and knock it off. 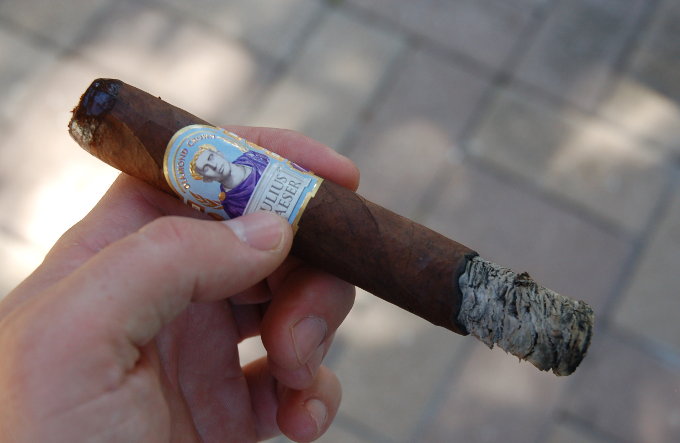 The sweetness has stepped up in this blend and I’m loving that. I’m a sucker for a sweet cigar. This isn’t a cloying sweetness, just a nice lift to the cream, coffee, and chocolate. Pepper is still there to balance it out, and I’m getting some woody notes as well. It’s all super smooth.

Smoke time is 35 minutes. The burn is a little wobbly. Off by maybe a quarter of an inch. At the low point we are at the second third.

The ash is still hanging tough. It’s like a high stakes game of Jenga with each puff upping the ante. Will it land in my lap? Magic 8 ball says “probably”. Good thing I wore my cup. 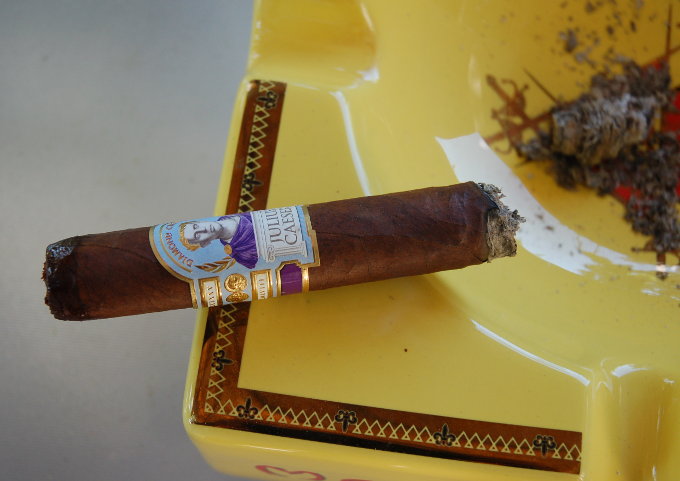 A little maltiness has been introduced to this profile. Like a smokey cup of Ovaltine.

It’s a beautiful day in S.W. Florida. A little warm, but I’m in the shade and there is a light breeze. The sky is clear and light blue. Some yard work is on the agenda today and I’m looking forward to it.

The ash dive bombed onto my keyboard. A direct hit on the track pad that scattered ashes all over the keyboard. That’s OK, this is my old laptop that I have dedicated to cigar reviews. Better than a direct hit to the nutsack I suppose. I tip the ashes into my ash tray and keep moving.

The aroma of this cigar is sweet, reminding me of chocolate covered fruit. Not a bad aroma. 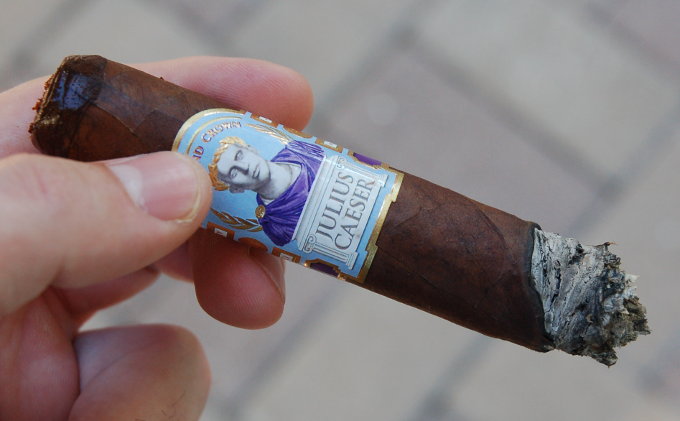 Here is an update on the flavors: the cream has backed off a little, but there is plenty of chocolate, earth, maltiness, and sweet tobacco. I’m also getting a little wood and earthiness in the background. On the retrohale I’m getting some light black pepper, and a little raisin.

Strength is beginning to show up. Nothing overwhelming. At this point it is relaxing.

The burn is still wavy so I offer another small correction. It has been months since I last smoked this cigar, so I don’t recall if this is normal.

The body of this cigar is ticking up. We are into a solid medium now. Chocolate and malt have stepped up on the draw flavors, and the pepper and raisin have both picked up on the retrohale. It was unexpected and the pepper gets me sneezing. 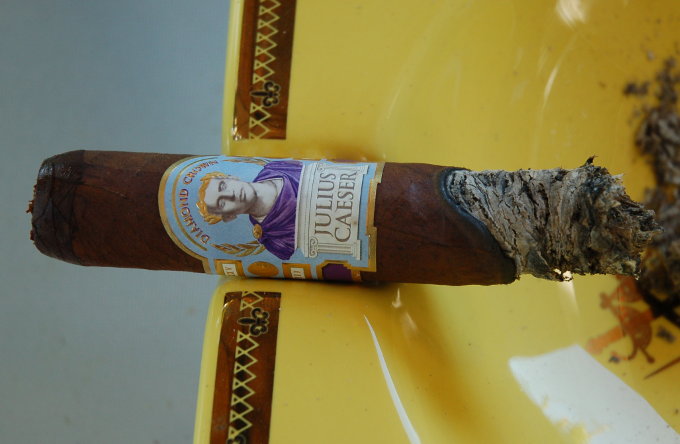 The burn does not want to stay even. I correct it again. Not the end of the world, but for a stick that retails for over $10 that has been sitting in my humidor for over a year, I think I need to dock it slightly. Could be I’m unlucky with this cigar, but it bears mentioning. Otherwise the cigar is smoking fine. Hasn’t gone out, and it’s producing plenty of smoke. 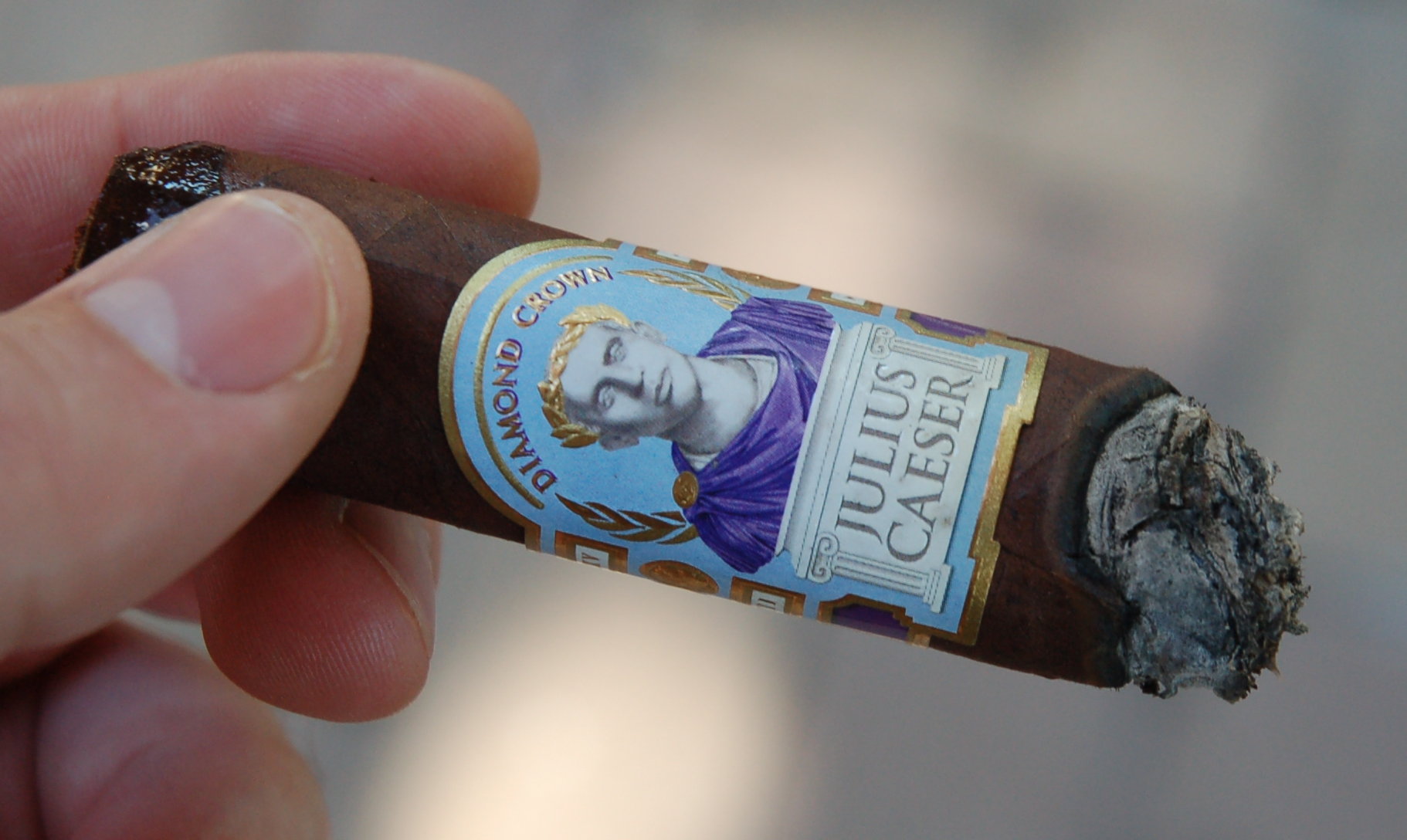 The burn has gone wavy again. I see a little tunneling and smoke output is waning. I knock away the ash and correct the burn again. The band is loose and is moving around on the cigar. At least it isn’t glued to the wrapper.

Here is a flavor update: malt, coffee, chocolate, earth, light wood, and a touch of saltiness. Not a big fan of salt in cigars, but it’s minor at this point. The retrohale is black pepper, baking spices, chocolate, and sweet tobacco. 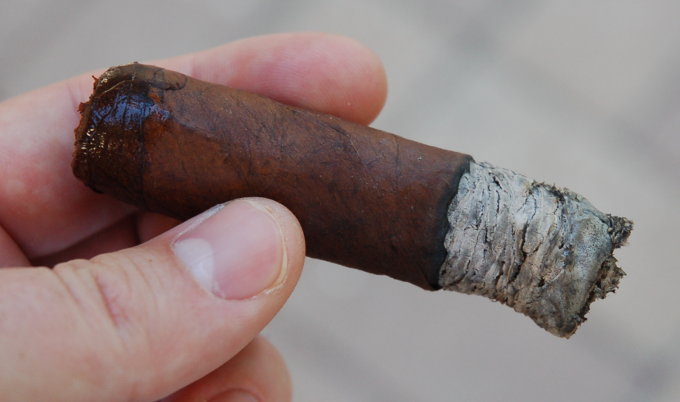 We are at the band. I slide it off the back of the cigar. It’s a beautiful band. The purple, sky blue, gold and white motif is interesting and elegant. It contrasts nicely with the dark brown wrapper. I know bands don’t do anything for the cigar besides raise the price, but it’s interesting and nicely done. 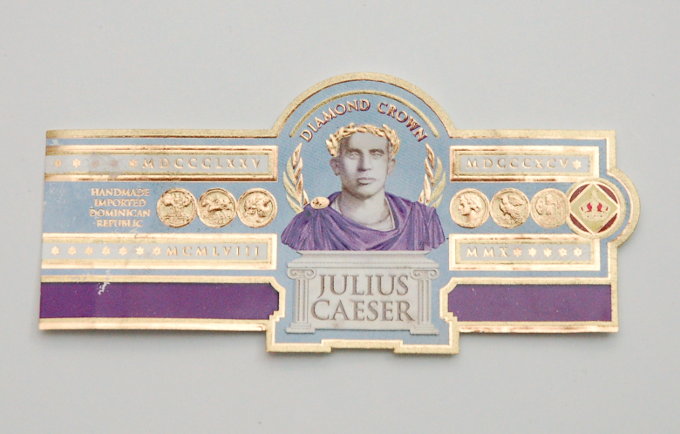 The burn line continues to do funky things while the flavors continue to be solid and enjoyable. It’s still medium bodied. Malt, raisin, chocolate, coffee, earth, and a touch of sweetness. The saltiness from earlier is gone. 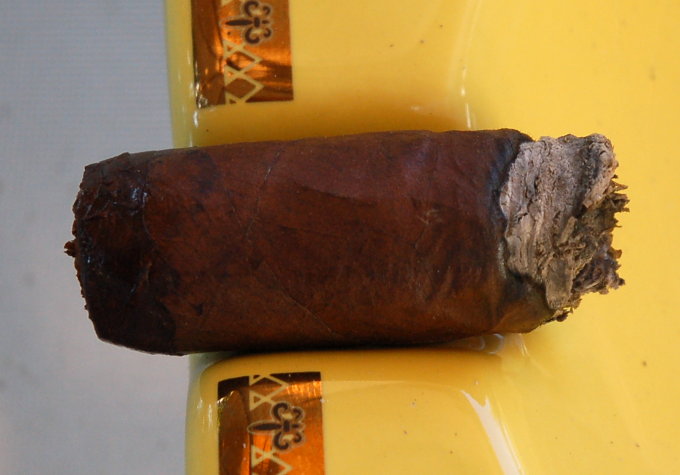 Wood has picked up now. So has the strength. I’m not sick or spinning, but can feel the weight of the nicotine on my brain. An aromatic cedar quality is creeping back into the blend. A few puffs later and the chocolate and coffee returns.

I gently knock off the ash, and hit the high spots of the wrapper with my torch. We are at an hour and 35 minutes and approaching the final inch.

I’m getting a little leather. I seem to be tasting leather on the tail end of a lot of cigars that I have recently reviewed. Maybe that’s just my palate and the way I experience cigars, but I am getting a distinct oily leather flavor. No other way for me to describe it. Still also getting some coffee and chocolate. It plays nicely with the leather. 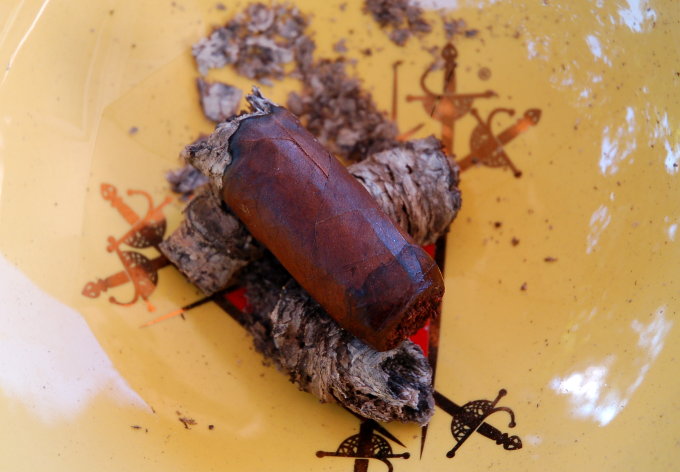 At the hour and 45 minute mark the flavors begin to muddle. You can keep going, but I’m good at this point. Time to end the review.

The Diamond Crown Julius Caeser is on the subtle side. Generally, when it comes to my preference in cigars “subtle” might as well be a 4 letter word. But here I don’t think it’s a bad thing. It’s a smooth cigar with pleasant flavors. It’s subtle, but not bland. It has good flavors that are largely consistent through the first 2 thirds, but there are transitions here and the cigar always tasted good. The chocolate notes steal the show for me and they are present throughout the cigar. The cream in the first third or so is great, and I like the maltiness found in the second third. These flavors compliment the chocolate notes well.

The burn line on this particular stick leaves something to be desired, but nothing a quick touch up couldn’t fix. Smoke output is good throughout the cigar.

I think this past year of rest has been good to the cigar. I smoked one after a month or so of rest and frankly I wasn’t impressed. It smoked slowly, and I recall that it reminded me of a much milder and less exciting version of the Room 101 Uncle Lee. But today’s cigar held its own, offering up a lot of enjoyable flavors. I think J.C. Newman has succeeded in blending something elegant here. That’s tough, because I’ve seen “elegant” used as marketing speak for a cigar that’s light on flavor. That’s not the case here. This is a mild to medium bodied cigar that doesn’t lack flavor.

I’m going to let my remaining 2 cigars rest some more. This strikes me as the kind of cigar you can forget about in your humidor, and then pull it out when you are in the mood a smooth and balanced stick.

Ultimately, I recommend this cigar. Personally, I wouldn’t splurge on a box, but I’d buy it again at the right price. For me that’s under $8.

I recommend purchasing the Julius Caeser at Famous Smoke Shop. Please consider that purchasing things through any of the links on this website, including Amazon.com, helps support the website and keeps it going. Any and all support is greatly appreciated. Thank you very much.