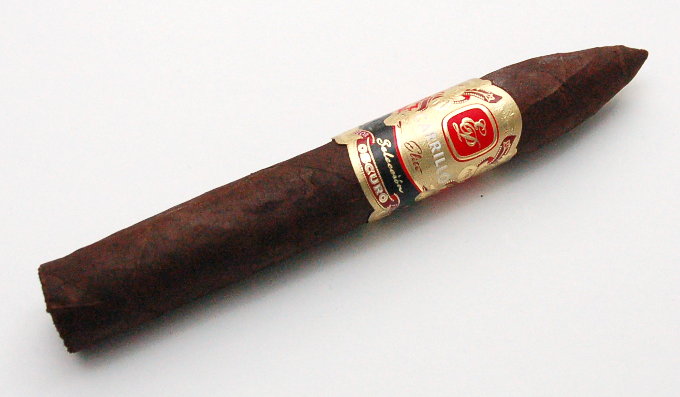 I was turned onto this cigar by my cigar smoking bro Zach. I made a trip over to his neck of the woods a couple months ago. We visited a few cigar shops, and this was one of his recommendations for me. It was probably the most memorable smoke of the weekend, so when I saw a 5 pack for sale a couple weeks after my trip I jumped on it. I ended up paying around $5 a stick. I’ve smoked through a few of these now and am ready to put some thoughts to paper.

This cigar also holds the distinction of being the #4 cigar of 2016 as ranked by Cigar Aficionado. Here is a link to their product page on E.P. Carrillo’s website.

The Seleccion Oscuro is a large and rustic cigar. The wrapper is dark brown in color, mottled, and features plenty of veins. There is a visible sheen to the cigar and a light about of tooth. Construction looks good with tight seams and a beautiful pyramid shape. There are a couple of spots of cigar glue on the wrapper, but beyond that no complaints. the cigar has an average weight for its size. 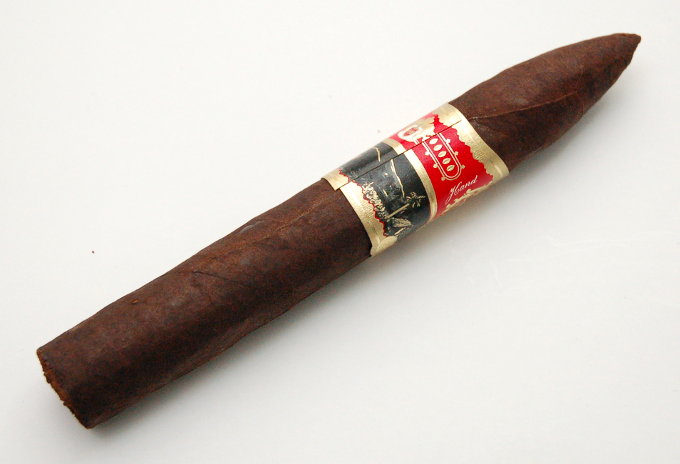 Sniffing the wrapper I’m assailed by a rich blend of chocolate, raisin, barbecue sauce, and leathery flavors. It’s intense and pleasant. From the foot, I get cedar, chocolate and barn yard. 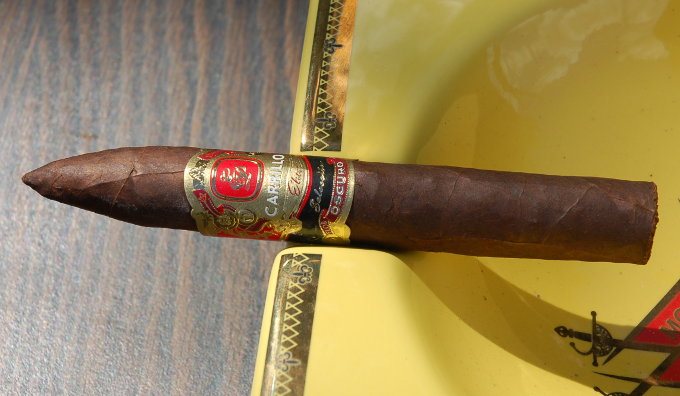 I clip a quarter inch or so from the cap with my Xikar cutter. The draw is free and easy. Time to start toasting and light ‘er up. Start time is 12:35 PM.

After the first couple puffs I get black pepper, chocolate, wood, and a tangy element that is this cigar’s signature flavor. At first I didn’t know how to describe it, but after smoking a few of these I think “barbecue sauce” is the way to go. It’s not a sugary sweet barbecue sauce, but it sure is tangy. It’s a distinct flavor that I haven’t come across before my cigar smoking journey. It may be the “dried fruit” flavor Cigar Aficionado describes, but it doesn’t register as fruity to me. 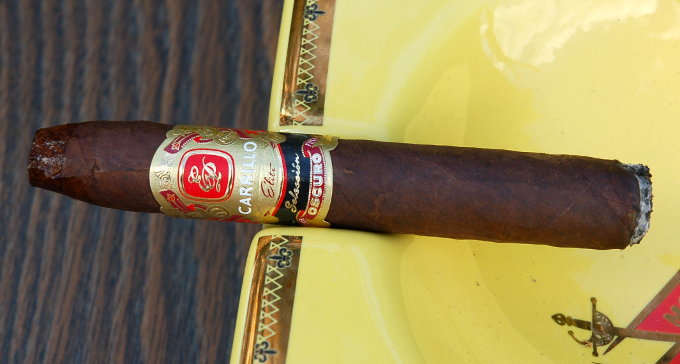 Five minutes in and cream shows up on the front of the draw flavors.

This is my first review in almost a month. I got sick, which took me out for a couple weekends, and then I had some issues at my office requiring a couple 6 day work weeks. Not much time left for smoking cigars, and when I did have the time I just wanted to relax and smoke a cigar rather than dissect one in a review. At any rate I’m back in the saddle and 2018 is in full swing. Hard to believe we are almost through February already. 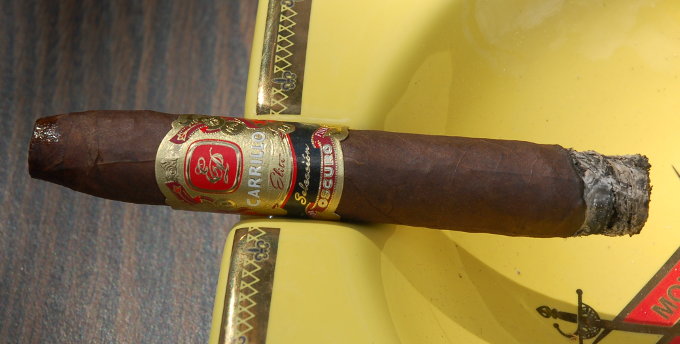 We are about 10 minutes in at this point and the flavors are developing nicely. The cigar is burning quickly and producing a fine light grey ash. Light cream followed by plenty of chocolate, tangy barbecue sauce, and leather supported by earth, and indistinct wood. The finish is black pepper and wood.

Its in the high 70s today with a breeze. It’s sunny, the sky is blue, and there are plenty of fluffy white clouds overhead. A large commercial jet flies low above me. I can hear the delayed sound of the engines traveling behind the airplane.

Our Seleccion Oscuro is smoking pretty well. The burn is a little wavy, but it appears to be correcting itself. The cigar is producing tons of smoke. The aroma is unique. There is also a tanginess present in the aroma, but it’s different from the flavors on the draw. I also smell fennel.

Raisin and nuts join the mix of draw flavors. Body is at a solid medium. So far this is a complex and flavorful cigar.

I finally finished Norman Mailer’s the Executioner’s Song. I referenced that book in my last review. It was a 1000 page book and took me almost a month to get through it. The start of the book was fascinating, but the middle and end dragged, bogged down by details that I don’t think we necessary to drive the plot along. The book was a blend of non-fiction told in a narrative format. I would have been OK if Mr. Nailer exercised a few more creative liberties and trimmed the fat. I suppose the same could be said for my writing style.

Our EP Carrillo Seleccion Oscuro keeps chugging along. The finish has a lot of leather in it now, and I attempt to correct the wavy burn a bit with my torch lighter. We are nearing the end of the first third. 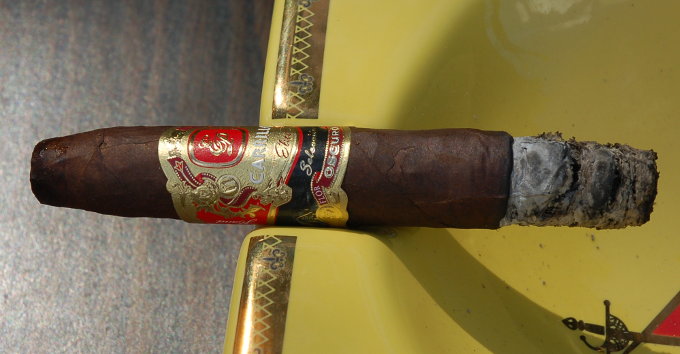 Smoke time is right at 30 minutes. The inch and a half of ash is hanging on, but has a major crack in it. It should drop any moment. Probably into my lap. I snap a picture for posterity and give gravity another opportunity. The ash hangs tough.

The flavors are continuing to develop. The cream has backed off, while leather and chocolate are taking center stage. That tangy barbecue is still present, but depressed slightly for the moment and appearing more in the aroma. Raisins and nuts weave through the background while black pepper appears mostly on the finish. There is also a smoky element to this cigar. No surprise as it’s on literally fire, but there is a smoky flavor present in the blend, and I’m getting it on the finish.

Strength has picked up on this one. I feel a little light headed every time I stand up to take a photograph. Can’t say I noticed that in prior smokes, but I’m noticing it now.

Vultures loop lazily high off in the distance. Riding the thermals. A bald eagle joints them.

At 40 minutes the first chunk of ash drops while the Seleccion Oscuro was resting in the ash tray. The flavors remain largely unchanged, but tangy leather is the strongest flavor now.

The heat and the cigar both have me reaching for my water. It would have been a nice beach day, but traffic on the key was nuts this morning. Seems like everyone had that idea so I retreated to my back yard to avoid the masses. Gotta be the early bird to snag a parking space and a spot in the shade. 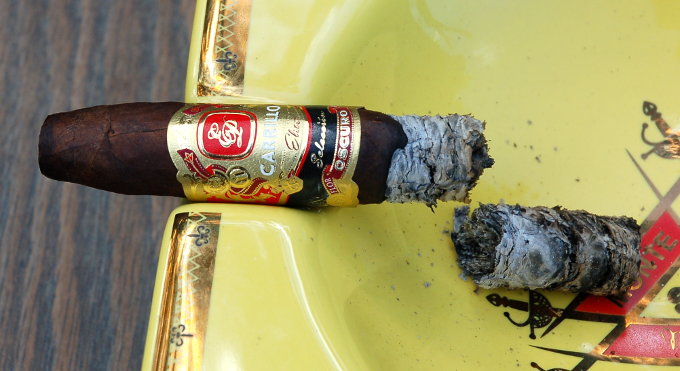 Black pepper ramps up on the draw, and is backed by cedar, leather, tangy barbecue sauce, and chocolate. The wavy burn in the first third is mostly gone now. We are a right around the half way point now. Both the band and final third are fast approaching.

The flavors continue to shift slight with every few puffs. Now it’s tangy cedar on the front of the palate. Leather, and a smoky barbecue sauce support it. Not getting much in the way of sweet flavors at present. The finish is black pepper, smokey cedar, pop corn, and a lingering leather.

Smoke time is 1 hour. We are an 1/8″ away from the band so I gently tug at the band. It pulls apart easily. E.P. Carrillo recently re-branded their entire company, and I like the shiny new band.

The flavor on the draw now is almost sharp. It’s that tangy flavor mixed with cedar and leather. Chocolate rejoins the cast of characters.

The vultures have dropped down lower. They are circling overhead. I take another puff to prove I’m still among the living. It’s blue skies overhead and to the North, but I’m feeling faint raindrops. Gray clouds are rolling in from the South. Welcome to Florida. Hopefully I don’t get dunked on by mother nature, as I still have at least half an hour left on this cigar!

I’d say the body is at medium full now. Strength is present, but not overwhelming. Smoke output continues to be high, and the burn qualities of this cigar are good.

I’m not sure if I comment enough on whether I like the cigar during the review. It’s a just the facts ma’am approach laced with weather and wildlife reports. But I’m enjoying this Seleccion Oscuro. I love the unique tangy aspect of this cigar. So far the entire smoke has been memorable and full of flavor.

On the subject of flavor, here is what I’m currently experiencing: tangy cedar, leather, chocolate, nuts, and pepper. The finish remains long and smoky. Black pepper pecks away at my palate along with earth and wood. The retrohale and aroma both have that signature barbecue sauce flavor.

I accidentally bump the cigar and the ash falls off. It has been burning a little slow in this final third. An hour and 15 minutes in and we still have couple inches to go. 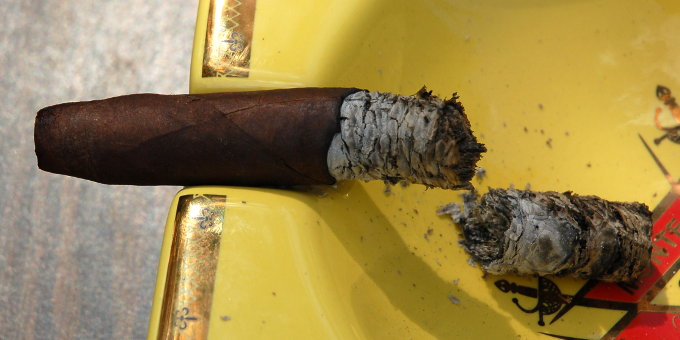 The nicotine makes my head swirl. A welcome reprieve for my anxious mind. As a trial lawyer, each day invariably descends into chaos. I’ve learned to embrace it, and Monday through Friday I charge into the office. Once more into the breach my friends. Once more into the breach. But I can’t help but take some of this chaos home with me. Lately I’ve been dreaming of practicing law. I wake up arguing about contracts in my mind. It’s a sick and twisted world. No wonder most lawyers are miserable.

I think a trip to the gym is in order after this cigar. Only the stairmaster and a few hundred pounds of iron can cure what ails me. Either that or a pint of bourbon. But I digress…

The rain has picked up slightly. It’s still light, but any stronger and I’ll need to pull my laptop and camera inside. But it could always could be worse. Hell, it could be snowing.

The Seleccion Oscuro remains mostly unaffected by the weather. But I’m noticing some tunneling. The wrapper ripples and distorts beneath the cherry. A slight burn correction is in order.

The flavors have darkened a bit. Black coffee is creeping in to the flavor profile. It is also present on the retrohale and lingers on the finish. Chocolate rushes back in to balance it out.

Coffee bean is taking the place of the tangy cedar. The leather has backed down, but comes and goes as it pleases. Still experiencing that unmistakable tangy barbecue sauce on the draw and aroma. It’s intoxicating. The cigar has remained nice and spicy. I settle in for the final bit of my cigar.

Another airplane flies low overhead. This is the third one this afternoon. They must be running them low for some reason. A high pressure system off the coast. The rain has retreated for now.

The final inch of this cigar reminds me of Ron Burgundy’s office – a little musty, but plenty of leather bound books and rich mahogany. And coffee. Spotted with barbecue sauce and a dash of pepper. It has been a fun ride, but the smoke is growing warm. We are coming to a close of the Seleccion Oscuro. As if on cue, it gracefully peters out on its own accord.

I have thoroughly enjoyed this cigar. I still have one left from my 5 pack. I left it in reserve in the event this review sample exploded in my face. But this cigar smoked great. A couple minor burn corrections, but mostly a trouble free smoke with good burn characteristics, and a memorable profile of flavors. It’s tangy and unique, and not a cigar I will soon forget. And for ~$6 or so a stick the price is right.