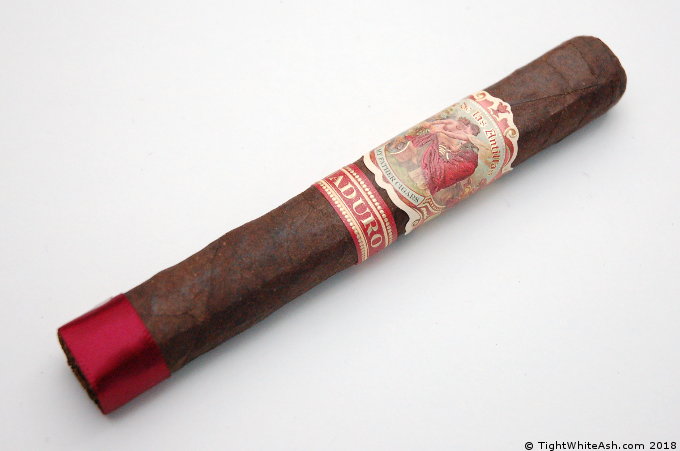 For today’s review we have the My Father Cigars Flor De Las Antillas Maduro. This is a cigar I wanted to try after reading some reviews. The original Flor De Las Antillas won Cigar Aficionado’s cigar of the year in 2012, and I love Maduros so it seemed like a no brainer. The difference between this cigar and the original Flor de las Antillas is that the maduro version features a habano sun grown Oscuro wrapper. The binder and filler are the same. 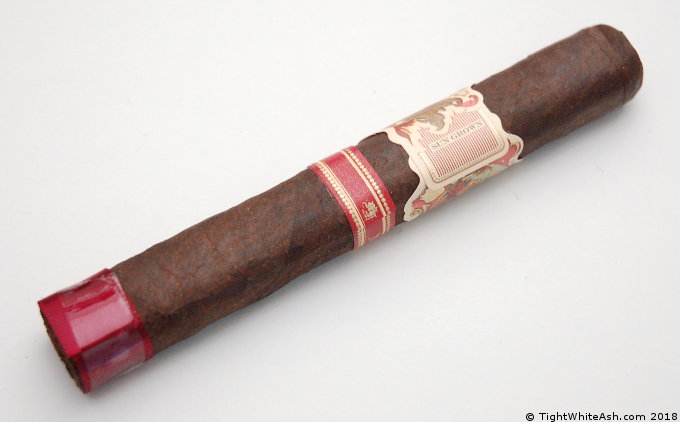 Here is what the manufacturer has to say about the blend:

Originally released in 2012, the Flor de las Antillas was named after Cuba; the largest and most beautiful of the Greater Antilles islands. With artwork from the early 1900’s, the Garcia family once again honors THE ISLAND / THEIR BIRTHPLACE with this latest creation. This 3/4 to Full-Bodied blend is a perfect combination of Ecuadorian wrapper with Nicaraguan binders and fillers. The Habano sun grown Oscuro wrapper and the gentle box pressing give the cigar complexity and balance. The filler is a combination of tobaccos harvested from farms in La Estrella, La Bonita 1 and Las Marias, owned and operated by the Garcia Family. This cigar has an ideal combination of strength EXQUISITENESS / ELEGANCE / DELICACY, with notes of creamy leather and a sweet and salty finish that resounds on the palate, producing a beautiful white ash giving it a great finish.

I have both the original Flor De Las Antillas and the Maduro version. Here is a comparison shot between the two cigars: 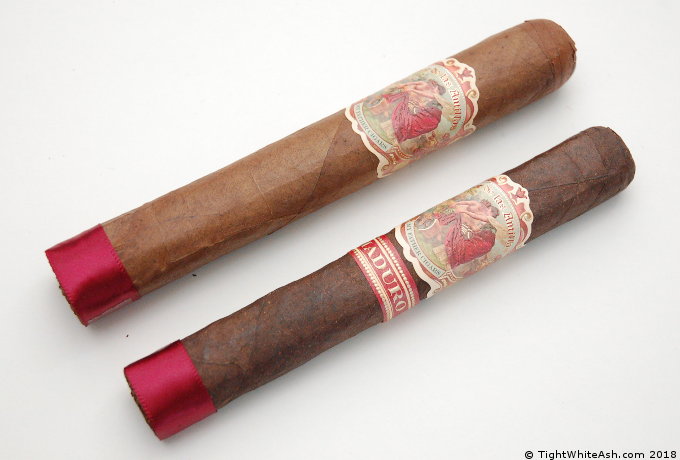 I’m going to start with the Maduro as it’s a Corona and I’m not in the mood to smoke a Toro right now. But I’m thinking I’ll review the original Flor de Las Antillas the next time I have a little time on my hands.

This is an attractive box pressed cigar with a soft rectangular box press and rich brown wrapper. The 3 bands are something else. I’m not a huge fan of cloth foot bands, but the paper brands are beautifully printed like all of My Father‘s stuff with raised letters and gold embossing. 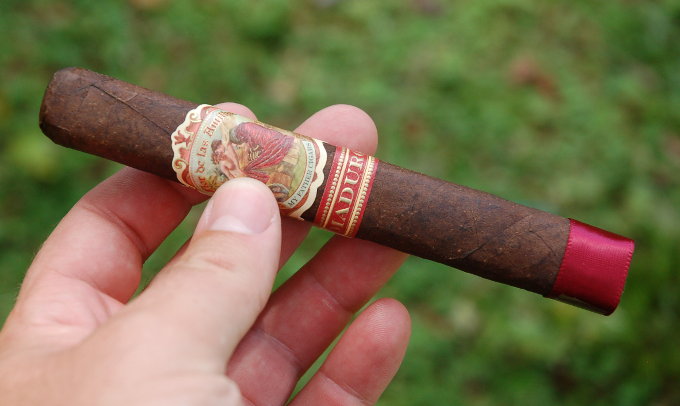 The cigar itself is beautifully constructed with cleanly cut tobacco, tight near invisible seams and minimal veins. The dark mottled wrapper has a light amount of tooth and oil. Rounding things out is a neatly applied triple cap. The cigar feels firm and evenly packed.

I gently tug away the fabric foot band. I clip away the cap and take a test draw. It’s snug, but I get leather, chocolate, and fruit. I start toasting and light her up.

The first flavor I detect is pepper. No surprise there, as this is a Pepin Garcia blend. A puff or two later and I’m getting a deep earthy flavor and the pepper. Body starts out at a medium full. The next puff brings on the additional flavors of leather and an indistinct wood. The puff after that introduces a little chocolate. Yet another puff and there are some musty almost fermented flavors. 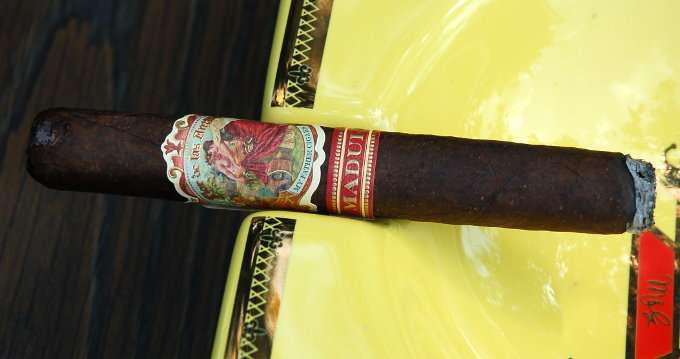 I’ll let this one smoke for a few minutes and report back as it’s getting more interesting with each puff.

I’m back. Man the cigar is getting complicated. Hard for me to put my thumb on everything, but some creaminess is coming in, along with plenty of pepper, earth, cedar, and a vegetal component that’s hard to describe. A tiny amount of chocolate weaves through. Plenty of body and a good amount of complexity.

After 15 minutes we have smoked through about half an inch. A solid light gray ash is forming. The burn has been even and trouble free.

I set the cigar down for a minute and pick it back up. There is a deep earthy richness to this cigar. Little sweetness at this point.

Suddenly, the body and complexity drops off. I try my best to detect the flavors. It’s now a subtle cigar. In fact the entire blend feels subtle to me. Even the aroma is subtle, smelling mostly of mild sweet tobacco. I’ll be honest “subtle” isn’t a word I’m fond of when it comes to cigars. I’ve given this stick 8 months of rest so I’m hoping to coax a good amount of flavor out of it.

It’s another hot day in Florida. I’m hanging in the shade. It’s breezy, offering relief from the 90 degree heat. The leaves rustle as the wind gusts overhead. Blue skies and fluffy white clouds on the horizon.

A mild fruitiness toys at the palate. It’s there somewhere, but not front and center. A little bit of creaminess, some light fruit, hay, and now some nuts. Wood and pepper on the retrohale. The finish is mostly pepper and it’s short. We are now at 30 minutes and the flavor has changed quite a bit from 15 minutes ago. It’s interesting but it’s still a subtle cigar.

The burn qualities are good. Still a mostly even burn. A little lopsided but nothing needing a correction. The ash is hanging on, at now over an inch, and there is plenty of smoke. I wish the flavors would pick up. The beginning had so much promise.

I’m bored. I am tempted to see what other reviewers have to say about this cigar. I try not to do that in the middle of the review, as I want the thoughts to be my own, but maybe I’m missing something here. I haven’t had any spicy food today and this is my first cigar. If I’m going to review a cigar it’s always my first cigar.

I knock off the ash and tune the burn line a little. That seems to kick the flavors up slightly.

Smoke time is 40 minutes. So much for a short smoke. I’m melting in the heat.

Flavors have picked up a little. The earthy richness is back, and there is some sort of mild fruit element present. Can’t tell you what it is exactly. Wood is also present, and pepper hits me on the retrohale. I’m sneezing quite a bit. The current flavors are an improvement over the tail end of the first third, but nothing awe inspiring. 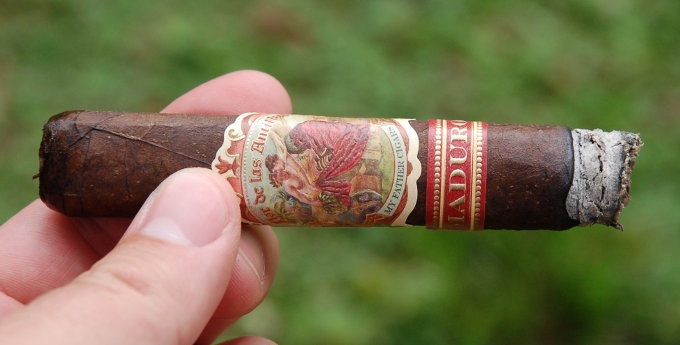 Apricot. I’m pretty sure that’s it. Nuts and earth. Medium bodied at best with a short peppery finish.

This is the 2012 “Cigar of the Year” with a maduro wrapper. I’m not sure I see a cigar of the year here, but maybe 2012 was a quiet year. I graduated law school in 2012 and was studying for the bar, fretting about my future and wondering if I would be able to service my mountain of student loan debt. I wasn’t smoking many cigars then.

A little chocolate is coming back and a tiny amount of coffee joins the apricot. Stuff is percolating ever so slightly. A couple green parrots fly silently in the distance. A quiet afternoon in paradise.

The apricot has picked up. It’s the strongest and most distinct flavor. Everything else is in a supporting role. It’s as if I’m listening to the cigar at half volume.

We are near the first band. It comes off easily. The flavors are light cream, apricots, earth, plain tobacco, and pepper. Wood on the retrohale.

I take another puff and the body has ticked up. So has the pepper. Plenty of plain tobacco. 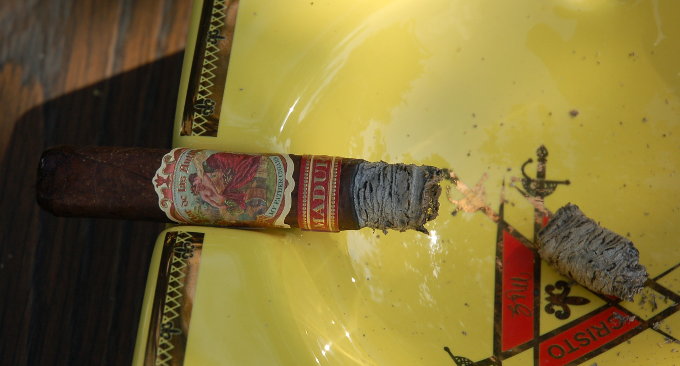 I mowed the lawn earlier and mocking birds are hopping around, rolling in the dirt and picking through the weeds. One bobs around within feet of my setup, its mouth open expectantly. If only I had some breadcrumbs.

I accidentally inhale a little of the cigar. The smoke hits my lungs and the nicotine goes straight to my brain. So far the strength has been medium. Middle of the road like the rest of this cigar.

The apricots and cream have fallen away. Wood and pepper. Pepper and wood. I yawn in my chair. My head spins as I get up to take a picture.

Coffee comes in. That’s good. Good to see a little action from my Flor de las Antillas Maduro. Lets hope it takes the ball and runs. 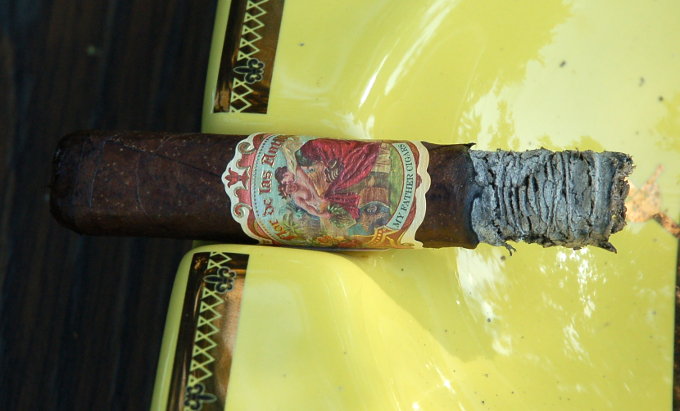 We are near the final band. The ash drops off and the band begins to brown. I peel it away easily. The band art is arguably the nicest part of this cigar. It’s beautiful thick embossed paper. Intricately detailed and chased with gold. Now it rests in the tray attached to my table. The denuded cigar smoulders gently beside me. 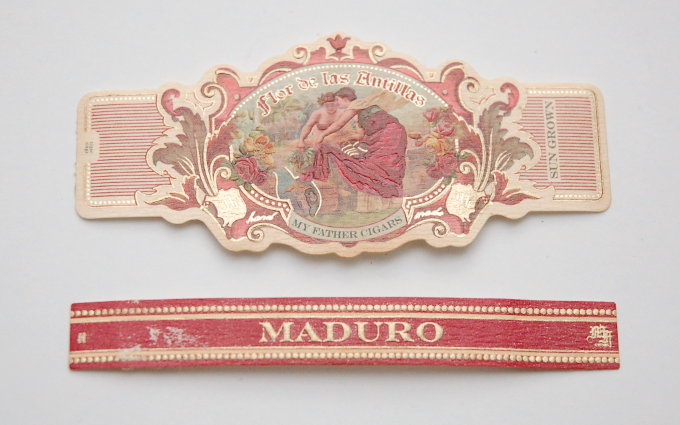 Mercifully the body has picked up. There is some complexity here now, but mainly riffs on a plain tobacco flavor with coffee, earth and that apricot returning. Maybe we will hit a sweet spot as we head towards the final third. The wind whispers and the oak trees gently sway.

Spicy apricot, coffee, plain tobacco and wood. That’s the profile of the moment for this blend. Not bad, but nothing crazy. By way of contrast, the AJ Fernandez New World I smoked in my last review took me for a wild ride. This cigar is much more delicate. More subtle and sedate. I could fall asleep in my chair if it wasn’t for the heat.

The burn is wavy, but not bad enough to correct.

The body is still a strong medium. I’m getting a little maltiness along with coffee, pepper, nuts and wood. That fruitiness is still present. I’m hot and my head is spinning. I drink water with my cigar reviews and decide to grab another glass. The strength on this cigar is kicking my ass. Maybe I overdid it at the gym earlier.

Finally I get a little of that leather in the description. In defense of the Antillas Maduro the flavors are here now. I think the cigar is finally gathering steam. Fruit, coffee, earth, and nuts. We are back in business and the cigar rallies as we enter the home stretch. 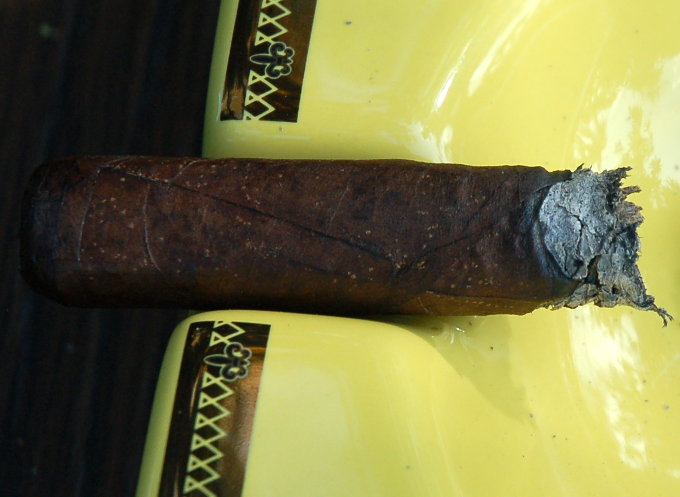 The coffee is getting stronger. Espresso notes envelope my brain. Sweat pours down my face, gathering in places I don’t dare mention in the presence of polite company. I know, too much information. I pant wetly in the summer heat. Good thing I haven’t taken to doing video reviews.

Coffee and spice dominate the final inch and a half. The apricot from earlier has fallen away. The backbone is tobacco. I squint in the sunlight.

Smokey leather pours from the cigar. Like a pair of fine Italian loafers, or that shoe shop I went to when the rubber heel fell off my oxfords. Coffee and leather, leather and coffee. Baker’s chocolate emerges. This final stretch is interesting, but it took a while to get here. An hour and 50 minutes by my watch.

In the final inch a salty finish creeps in. Plenty of tobacco, earth, leather, and coffee. A savory finish to this cigar.

My Father Cigars wasn’t kidding when they said this blend was delicate. This cigar requires some patience. For that reason I wasn’t a huge fan. Lots of dead space in between the beginning and the end of this cigar. But there are some redeeming qualities here. Some transitions and even moments of brilliance. But also moments of ennui. I smoked a couple of these a few months ago, and wasn’t impressed then. This particular stick was a little bit better, but still not something I’ll soon buy again.

I prefer bolder cigars. That’s just me. I don’t claim to have the world’s most refined palate, but I’m going to call these reviews as I see them. If you like subtle cigars the Flor de las Antillas delivers in spades and picks up near the end. A decent amount of strength as well. It’s also a slow smoker, but in this case I’m not sure that is a good thing. I’d be happier to condense this into an hour and a half or so. 2 hours was too much. But that’s just my mileage. See for yourself if you feel so inclined.