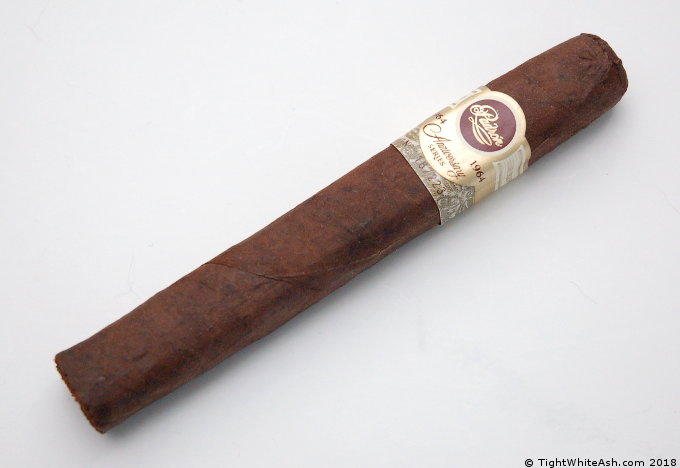 OK, we are back at it with a review of another Padron 1964. About 6 months ago I reviewed the natural version of this cigar. You can check out the review but I wasn’t a huge fan. Granted, I only had one cigar and was dealing with some weather issues during the smoke, but nonetheless I wasn’t impressed. That was a shame because I had high expectations for the cigar, and Padron cigars were my first real entre into the world of premium long filler cigars. 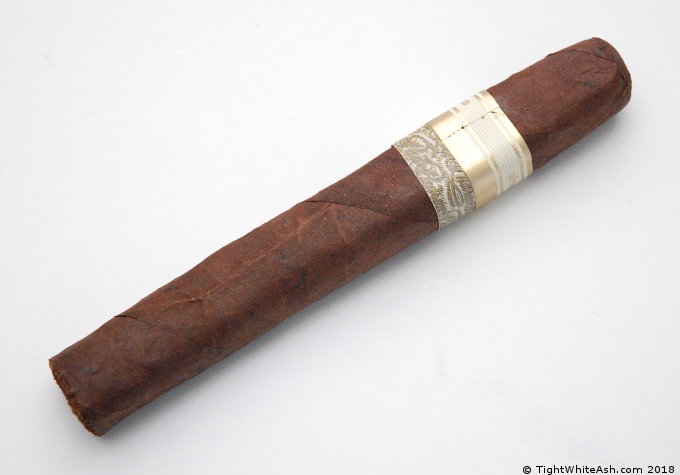 So I have given the Maduro version extra time to mature in my humidor. It’s been almost 7 months, and I was hankering to do a cigar review. The Padron 1964 Exclusivo Maduro’s ticket got pulled and here we are.

This is a beautiful box pressed stick. The seams are almost invisible. The cigar has a mottled milk chocolate colored wrapper. Veins are minimal. There is a little tooth to the wrapper and a light sheen. The cigar feels a little light for its size. It’s a handsome chocolate bar of a cigar with it’s neat box press. From a construction standpoint the 1964 is definitely a step up from the rustically rolled thousand series. 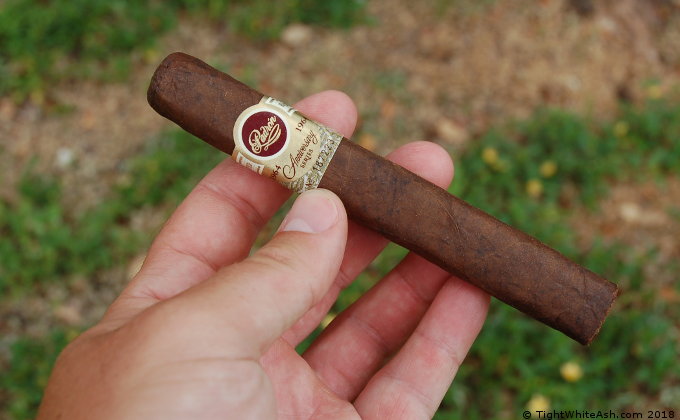 Sniffing the wrapper I get mostly barn yard and chocolate. From the foot I get more barn yard and raisin. Not the world’s most amazing aromas.

I snip the cap with my Xikar double guillotine cutters and take a test draw. It’s free and easy and I receive plenty of chocolate and dried fruit. I get to toasting.

It takes me a couple puffs to make sense of the initial flavors. Deep earthy notes supported by chocolate, raisin, pepper, and cream are the first I identify, but others tease my palate flickering off my tongue. Something more substantial lies in wait. Almost a meaty element, yet to fully reveal itself. Immediately I get the impression that this will be a rich and satisfying cigar. 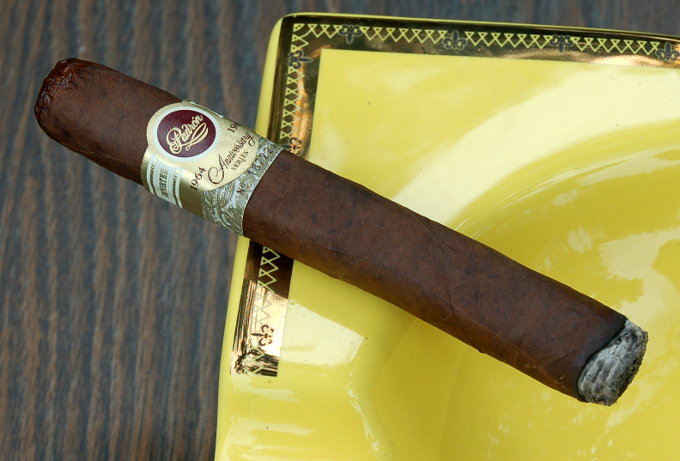 5 minutes in, and I’m noticing a woody element. Cedar makes an appearance. A nuttiness rolls in. Flavors are morphing and we have barely burned a quarter inch of this stick. I take another puff and now it’s tangy cedar. I let it rest in my ash tray. Smoke drifts lazily from the foot. I take another puff and now it’s cream and heavy pepper. I will spare you the puff by puff review, but so far each draw is delivering a different experience. It’s a magnificent start. 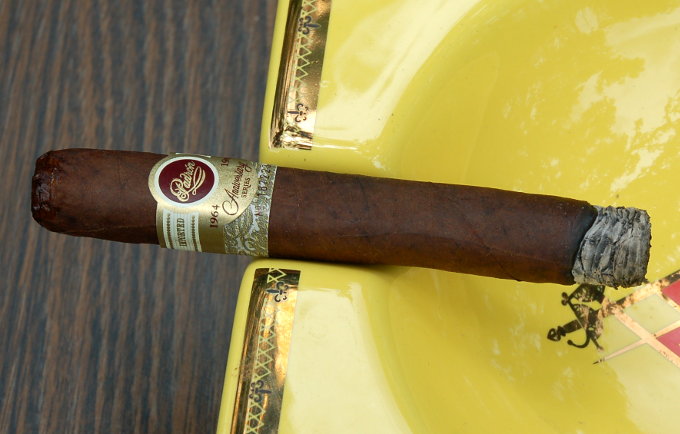 I was in the mood for a more complex cigar today. Lately I’ve been fishing a lot, and decided to combine my love of fishing with my love of smoking cigars. So I’ve been getting some good cigar time in, but as you can imagine it hasn’t been the meditative experience of sitting alone and truly focusing on what I am smoking.

I’ve enjoyed a few puffs now and the flavors seem to be settling down. The core flavors presently include chocolate, cedar, cream, and red pepper. When the cigar rest smoke drifts lazily from the foot. The aroma is sweet and mild. Body has been medium. A tight salt n’ pepper ash is forming.

It’s hard to believe June is half over now, but it is. The temperatures are rising. It’s presently 90 degrees and I’m bathed in sweat. I don’t mind the heat. In fact I’ve come to embrace it. That’s the beauty of summer in Florida. It’s going to be hot. Bring a towel. It’s cloudy, but the wind is still.

We are about 15 minutes in and I’m getting some fruity flavors. If I were a gambling man I’d say it’s orange zest. It plays nicely with the cream and pepper. It’s a bit like a smokey spicy Dreamsicle. 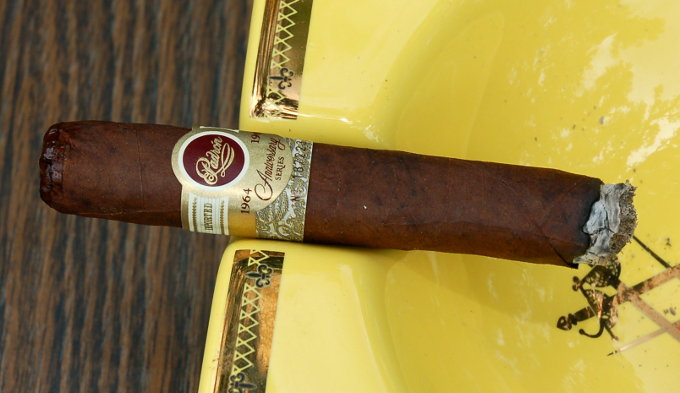 A half inch chunk of ash breaks loose and rolls into my ash tray. The burn so far has been a little wavy. No where near needing a correction, but I can’t call it razor sharp. No bother as the cigar is smoking nicely. It is the kind of cigar you can let rest in the ash tray for a minute or so with no problem. Plenty of rich flavorful smoke with each puff.

I get up to take a picture. A dark gray cloud has formed behind me. Uh-oh. Google said there was a 6% chance of rain. We will see. A light breeze cools the back of my neck.

Raisin is making an appearance now. A flock of noisy parrots flutter overhead. I take another draw and I’m assaulted by heavy, sneeze inducing black pepper, and a blend of tangy dried fruit. Another puff and it’s back to citrus but now with chocolate. Another puff and it’s a deep cedar. What a wonderfully complex cigar. The thing feels alive, transitioning wildly with each puff.

I’ll try to spare you the blow by blow, but it’s a wonderful cigar. I close out on the first third already feeling as if I already smoked a $10 cigar. 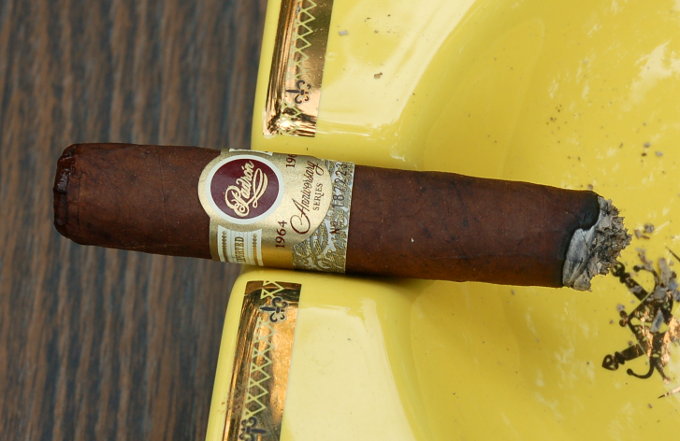 Suddenly the fruity elements have dropped out, as if through a trap door. In it’s place is deep chocolate flavor and a little coffee. The cigar has taken a 270 degree turn on the flavor wheel. Holy smokes. Sweat pours down my face as if I’m facing cross examination. Another small chunk of ash falls off as I rest the cigar in my ash tray. In that respect it’s smoking like the Churchill maduro. The aroma has also taken on a sweet milk chocolate flavor.

A couple puffs later and the fruity notes are re-emerging. Softer than before, but still present. They aren’t done yet. In fact, the aforementioned orange flavor is building back up with some red pepper spice. No creamy notes now. It’s impossible for me to deliver a complete list of flavors as they seem to change with each puff. They weave in and out like a well conducted orchestra. Rising and falling to an increasing tempo. 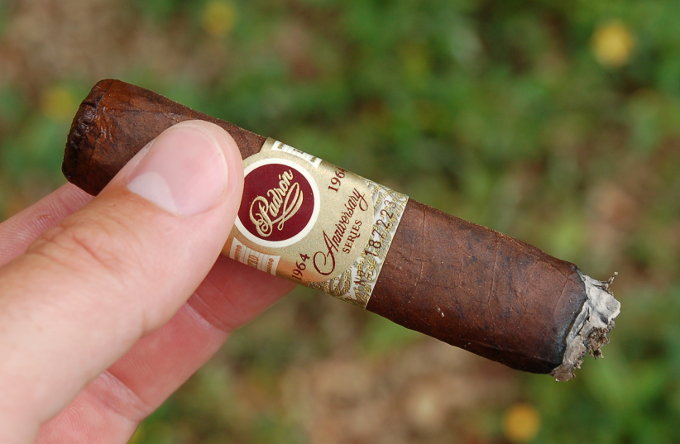 Strength and body are also rising. We are medium full bodied status. The niccotine has me reeliing a little. Fumbling for words. Thick fingers pound the keyboard. I grow delirious in the heat. A butterfly flutters among the Firebush on our fence line. Tangy cedar, orange zest, sweet cream, chocolate cake, pepper, raisin, toasted nuts, earth, hay, and bread. It’s a parfait of cigar excellence. An intoxicating sweet aroma tickles my brain stem. And I still have half the cigar to smoke. My sunglasses begin to fog. They may need to cart me off on a stretcher after this. Fuck me sideways.

A gentle breeze comes to my rescue. I sharply inhale. I soldier on. 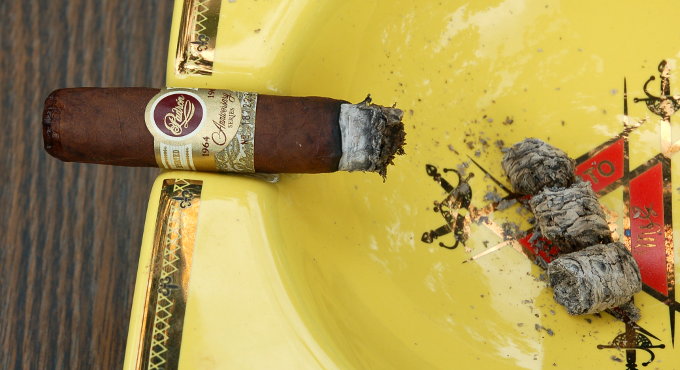 The flavors continue to riot in my mouth. Lets turn to the burn characteristics for a moment. The burn has been wavy, but never needing a correction. It will self correct, and then over correct. Nothing never greater than a quarter inch. But interesting to note. Tons of smoke output, and no relights.

As we head towards the final stretch our flavors are showing signs of darkening. Still getting some citrus, but also raisin, coffee bean, dark chocolate, light coffee and earth. 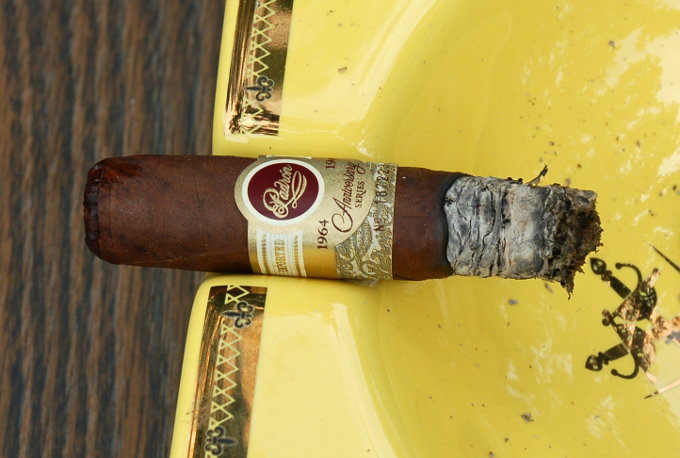 We are marching steadily towards the band. The heat is unrelenting. I’ve removed my sunglasses so I can more easily mop my brow. I may be suffering from a meltdown, but the 1964 remains cool. Plenty of rich flavorful smoke pours from the cigar. The burn does need a little correcting, and I fix it with my torch.

I’m almost afraid to comment on transitions, as they are fleeting. But I think the cigar has finally settled into its final third flavors. Raisins, chocolate, and coffee are the big players now, but there are still a number of small transitions and supporting roles. For example, tangy cedar is never far away. Pepper in varying dimensions plays in and out. Earthy elements linger and morph. Subtle baking spices peck away at the fringes. 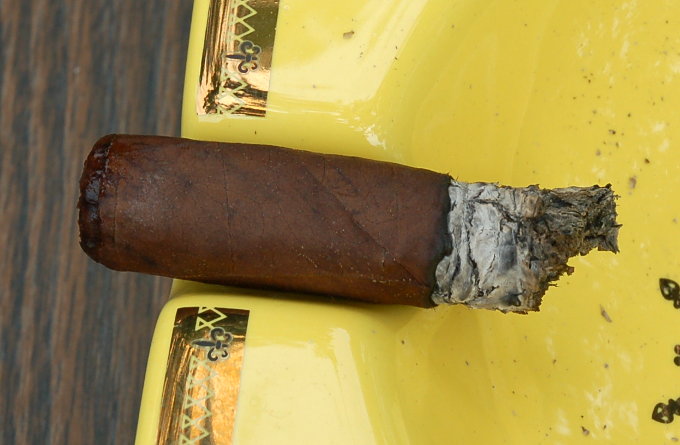 We are finally at the bands. I gently tease them apart with my thumb and forefinger. They are stubborn, but yield with careful prying. 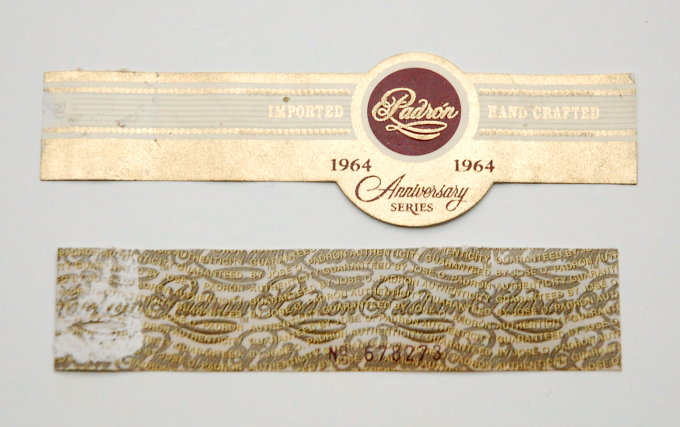 Coffee, dark chocolate, and a little mint are emerging as interesting elements of this cigar.

Bees buzz about the weeds near my feet. I’ve got to mow the yard after this. A commercial aircraft thunders by high overhead. The wind whispers through the oak tree, swaying our hedge of bamboo and palms. Suburban living at its finest.

Fruity coffee bean hits me front and center on the tongue. It plays nicely with the dark chocolate. Maybe I’m over smoking this cigar now. I let it rest. We still have a couple inches left. Depending on what happens I may take this one to the nub. We are at the hour and 30 minute mark, so this final third has totally slowed down. 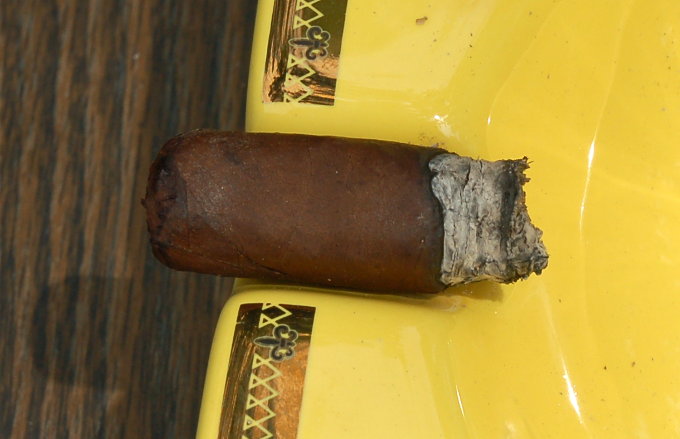 Mint, chocolate, and coffee are stealing the show. Swinging for the fences and then rounding the bases. Hell yeah. Another small chunk of ash breaks off and joins the others in the bottom of my ash tray. And the beat goes marching on.

Another 15 minutes has passed. We aren’t see much in the way of transitions now. Still chocolate, coffee, mint, wood, toasted almonds, and a little baking spice.

As we approach the final inch the smoke grows warm. The nub is slightly squishy. At nearly 2 hours I’ve gotten my moneys worth. I elect to end things on a high note.

This is the experience I wanted from the 1964 Natural. Bold and rich flavors. Tons of transitions. Great construction and superb smoking qualities. A true “cigar experience”. Something that has you swearing softly, in a good way, about the cigar you are smoking. Damn this thing is good.

Maybe the 6 months of rest had something to do with it, but this is how I have always remembered the 1964s I’ve smoked in the past. Something worth that double digit price tag that makes it a special occasion smoke, or a normal occasion cigar for when you can relax uninterrupted to fully enjoy an excellent smoke.

I would safely rate this as a box worthy cigar, provided you can afford to buy a box. Personally, it’s a bit expensive for me to commit to a full box, but if I had the means I’d sock some away and dribble them out into my rotation.