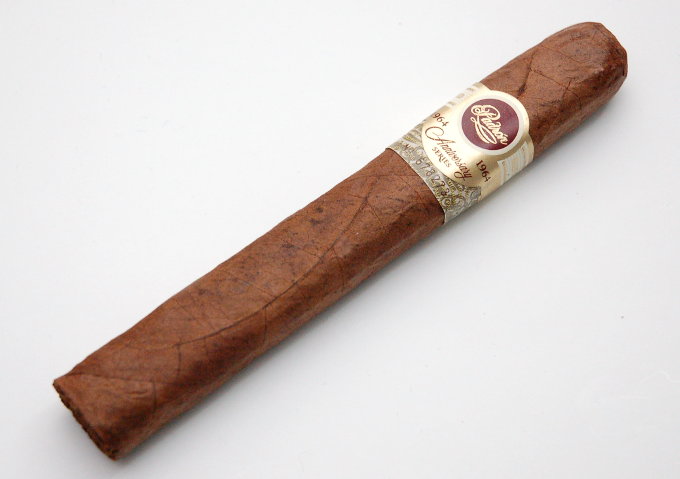 Released to commemorate Padron’s 30th anniversary in 1994, the 1964 Anniversary Series features plenty of aged tobacco and is a significant step up from their standard Thousand series of cigars. They offer the 1964 in a variety of sizes and in two wrappers: Maduro, and the Natural version reviewed today.

I’ve been a long time fan of Padron, and have enjoyed their 1964 series in the past. I got a great deal on this cigar in the “Exclusivo” (Robusto) size, and I’ve been looking forward to lighting it up for some time. In fact, I’ve been saving it for a nice day. It’s overcast today, but there is no wind. I figure now will be the perfect time to enjoy what should be a complex and flavorful premium cigar.

This 1964 Exclusivo has the appearance of an old cigar. The almond brown wrapper is mottled with dark spots and loaded with fine veins. The seams are tight, but the cigar itself seems a little bumpy, wrinkled, and and rustic. 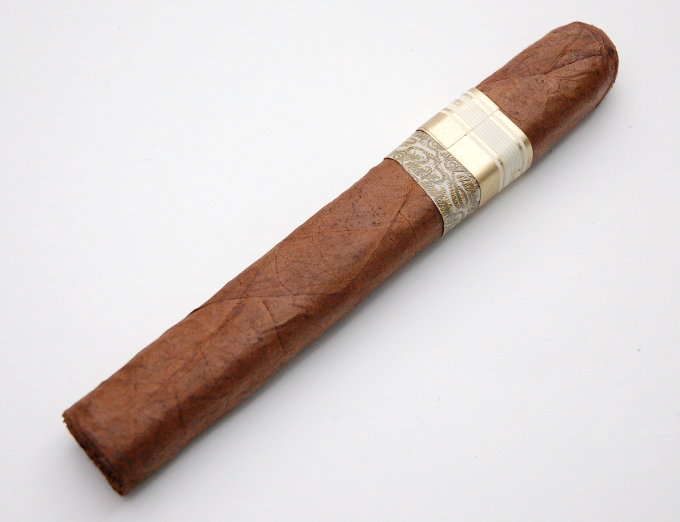 The signature Padron single cap has been applied neatly. There isn’t much in the way of tooth, and the cigar has a light amount of visible oil on its wrapper. It feels lightweight for its size.

Sniffing the wrapper I get a heavy cedar and barnyard aroma. From the foot, hay, cedar, and barnyard. I clip the cap and take a prelight draw. The draw feels fine but I’m not getting much in the way of pre-light draw flavors. 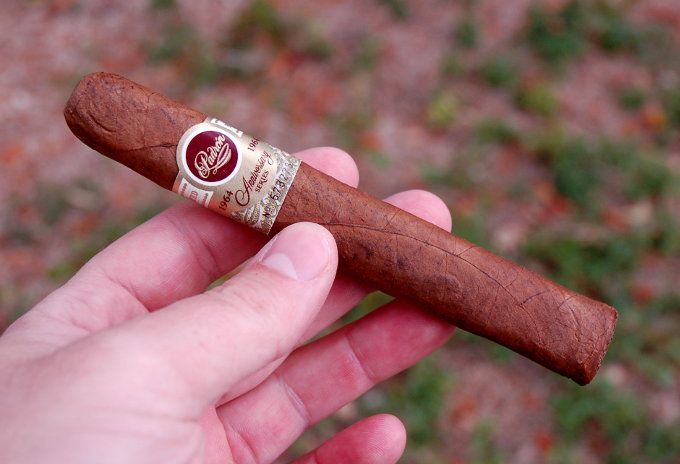 Things are a little slow with the first few puffs of this 1964. I’m getting a light fruity flavor, hay, light caramel, and black pepper. Not the most amazing flavors.

It opens up after a few puffs, and cedar and nuttiness emerges. So does a light rain. Crap. 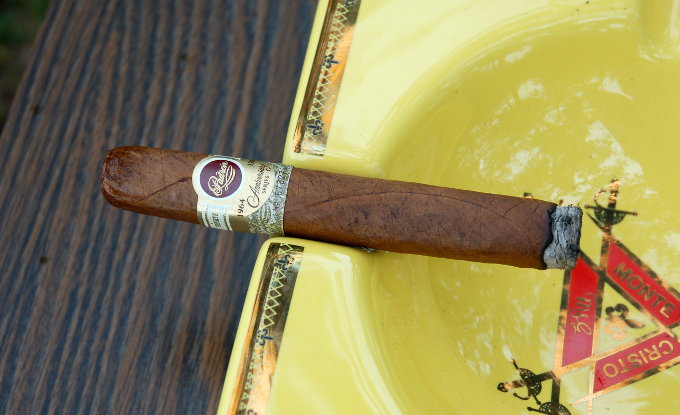 As usual I’m smoking outside. I don’t have a good solution for rain yet. This is the dry season so I haven’t been too concerned. We have a patio umbrella hand, but I need to get a better stand for it. Hopefully the rain passes. Otherwise I gotta MacGyver a fix as I’m certainly not scrapping the cigar.

10 minutes in and I’m getting cream, a strong fruit flavor, cedar, sweet tobacco, nuttiness and spice. The fruitiness is the most notable element. It’s sharp and tangy and reminds me of the orange I had after lunch. Not so much an orange aroma, but the sweet and sour taste of biting into an orange. Lots of citric acid on the tongue. 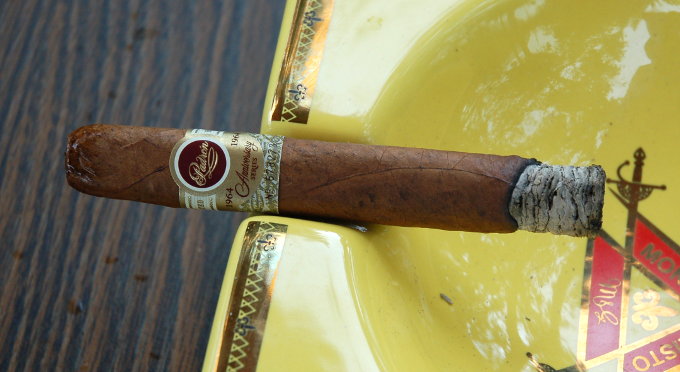 The light rain continues. Not enough to hurt my laptop or camera at this point, but it’s distracting. I drag the patio umbrella and it’s big plastic stand out to where I’m smoking and set it up. It leans precariously against my folding chair. I’ve been meaning to buy one of those sturdy metal stands.

Ironically I chose this cigar because the weather was good. It has been overcast, but no wind. And not a drop of rain until I started smoking.

While I was dicking around with the umbrella the flavors changed slightly. The fruitiness has faded and I’m getting roasted nuts now. It’s almost like almond butter. This cigar reminds me of a peanut butter and jelly sandwich.

I get up to take a photo and the umbrella starts leaning precariously. This stand was designed to be used with a table, and its beginning to fall apart. I have to lash the umbrella to the arm of my chair, like Odysseus lashing himself to the mast of his ship to resist the Siren’s song. No Sirens here, but this is still a category 5 clusterfuck. Amidst all of this nonsense the cigar goes out.

At this point I think I’ve done the 1964 a disservice. But my setup is now squared away. I take a deep breath and relight the cigar. Lets try this again.

Upon relight coffee has entered into the equation. The cigar continues to be subtle. Flavors are there, but they are muted. Citrus, light cream, light coffee, nuts, and mild black pepper. A mild to medium bodied cigar.

As if on cue the rain goes away.

Smoke time is at 40 minutes.

This 1964 Exclusivo continues to be a pleasant smoke with the sharp citrus flavor ramping back up to dominate the profile. 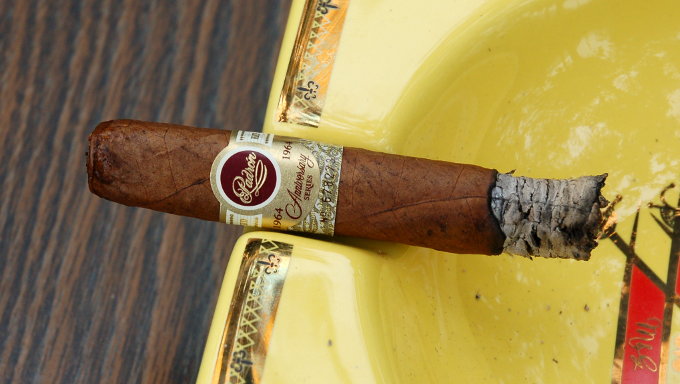 The burn line has always been excellent. Smoke output is good. Unsweetened cocoa joins the supporting cast of flavors. Delicate floral notes emerge on the retrohale along with the nuts. 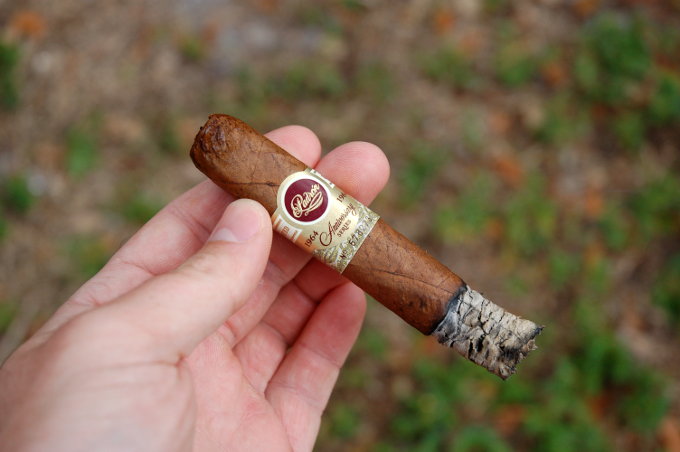 I’m getting a mild nicotine buzz from the 1964 Exclusivo. Nothing crazy, but noticeable. The body is on the low end of medium. Pleasant, but a little underwhelming if I’m being completely honest.

An inch or so of light gray ash drops away gracefully from the cigar. Into the ash tray, not my lap. As God intended.

The sharp citrus has faded away. There is still a fruity element, but nothing like the start of the second third. Still getting some cream, nuts, cedar, light coffee, and a subtle cocoa finish. 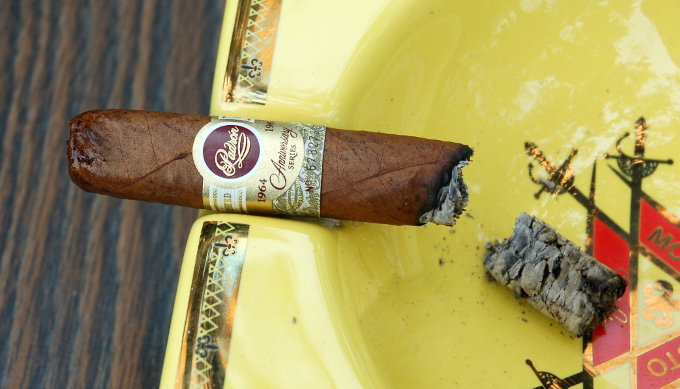 The burn has gone slightly astray after the ash dropped. I give it a little encouragement with my lighter. Just the lightest touch at the very edge of the cigar is all it needs to correct itself.

I’ve been smoking on this 1964 Exclusivo for an hour and 10 minutes now. The body has yet to raise to a full medium.

But things are happening. Coffee is building up. The citrus fruitiness has turned to plum. I’m getting raisins and chocolate on the finish. It’s nice to get some sort of a transition. 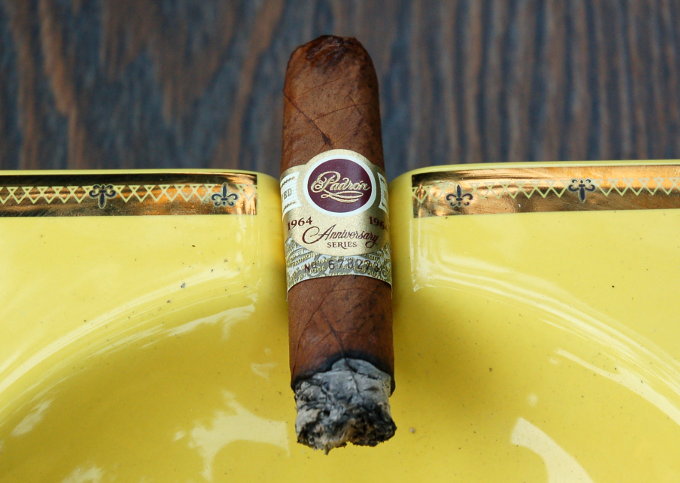 Time to remove the overlapping bands. They are cemented on with plenty of glue. It takes a fair amount of effort to remove them, but the wrapper is left intact. The secondary band has a serial number on it to dissuade counterfeiting. Next thing you know they will inject these with microchips.

Here is an update on the flavors: cream, cedar, coffee, light sweetness, toasted nuts, light fruitiness, raisins, light pepper, and earth. Many of the same elements that were present in the start of the smoke. The aroma is sickly sweet.

Earth and coffee are ticking up. I’m getting some more pepper as well, especially on the retrohale, but it fades quickly. Nothing crazy here. 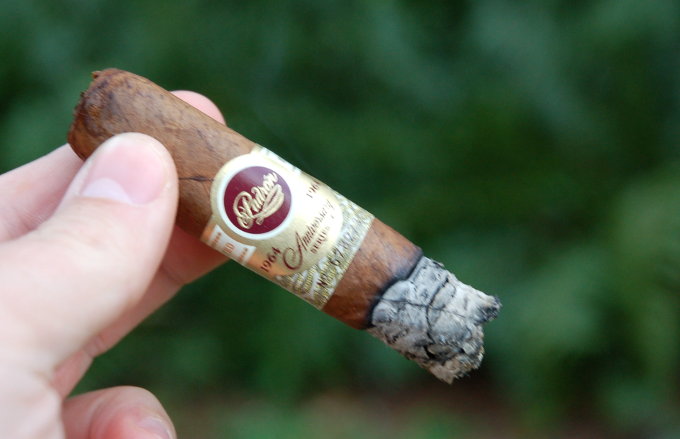 2 inches left and the 1964 requires another relight. This time it’s not my fault. The weather has been cooperating, and I’ve been giving my full attention to the cigar. This is disappointing.

A string of ducks flies hurriedly overhead. I don’t get to be outside much during the week, especially since it gets dark early this time of year. This 1964 may be a little underwhelming, but I’m still enjoying the time outside.

The flavors are less complicated after the relight. Neutral tobacco, coffee, earth, a touch of cedar, and some indistinct nuttiness. That’s pretty much it. We are nearing 2 hours here. 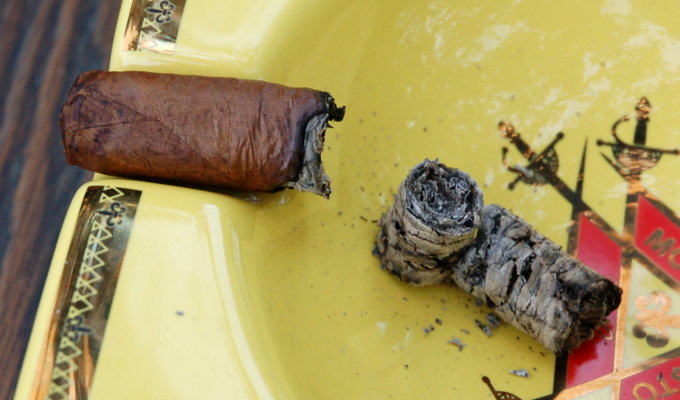 With an inch and a half remaining the smoke is growing hot, the flavors are growing bitter, and the cigar goes out again. I decide not to relight it.

I have had a few 1964 Anniversaries in the past in a smaller ring gauge. I remember those being much better than this. A sweet and flavorful cigar with memorable transitions. This “Exclusivo” version of it didn’t do much for me. Pleasant, but largely underwhelming. I was expecting bolder flavors and more transitions. The cigar never took off. Not worth $12 in my book. Maybe if you like a milder cigar it’s worth it, but this 1964 Exclusivo left me wanting more.

I have this same vitola in the Maduro version. I will review it, but I think I’ll give it more rest first.

Admittedly this review is based on a sample size of one. And it’s just my opinion. Plenty of people love this cigar. I found it to be just OK. My review is just one data point among many. Maybe the weather had something to do with this one.

As I move to score this cigar, on the 0-2 scale I give this a “0”. Based on this cigar, I would not buy it again anywhere near MSRP. Despite that, I’m sure I’ll revisit the 1964 Natural at some point, but I won’t be in a hurry. When I do I’ll update this review.