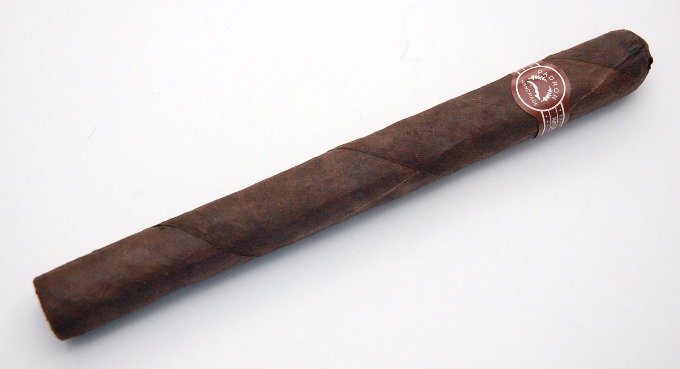 Padron was my first love when I started smoking cigars in college.

The problem was that 10 years or so ago when I was in college I couldn’t afford cigars, and I couldn’t figure out how to humidify them properly. They didn’t have boveda bags then, or I didn’t know about them. All I had were those little plastic things with the sponge that you fed distilled water. I put regular water in it once and killed it. Poor and frustrated, I put my little 50 count humidor away and got into pipes and pipe tobacco.

Pipes are much better for a broke college kid. My favorite pipe was a $5 Missouri Meerschaum corncob. A $10 tin of tobacco would be good for 25 smokes. Hard to beat that when a single cigar can easily cost $10.

I remember that I actually made some pocket change buying and selling pipe tobacco on the forums. I was in New Orleans at the time, and if I recall correctly Dunhill was changing their blender and packaging. I was able to find old tins at retail on dusty shelves of old tobacco shops, and then sell the tins for several times that to collectors. Retail arbitrage at its finest. 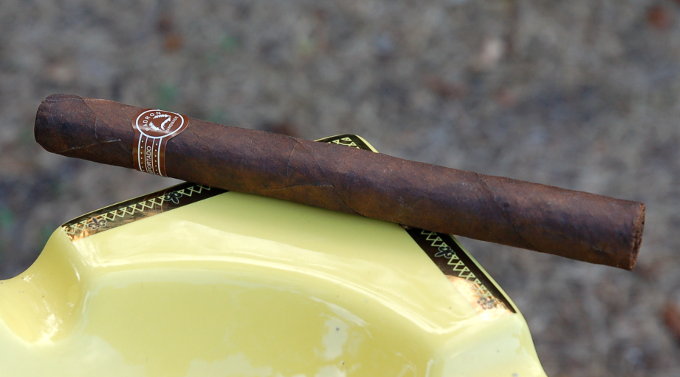 I don’t remember many of the cigars I smoked back then, but I remember the Padrons. They were unassuming but excellent.

When I started to get back into cigars a couple years ago Padron was the brand I trusted. My trust was always rewarded with delicious, perfectly smoking cigars.

I bought several boxes a year or so ago, and still have a handful of them in my humidor now. I bought them in a few different vitolas, but the Churchill Maduro is a nice size. They are full of flavor and a consistent cigar. I thought it would be a good choice for today’s review.

The Churchill Maduro is a long rustic looking stick with visible seams, and a dark mottled wrapper with small veins. Inspecting the wrapper closely I see a couple pin holes in the wrapper (not cigar beetle holes), and a patch on the back side of the stick.

The wrapper has a rough texture to it. Lots of tooth. Not particularly oily, but it has a dull sheen. 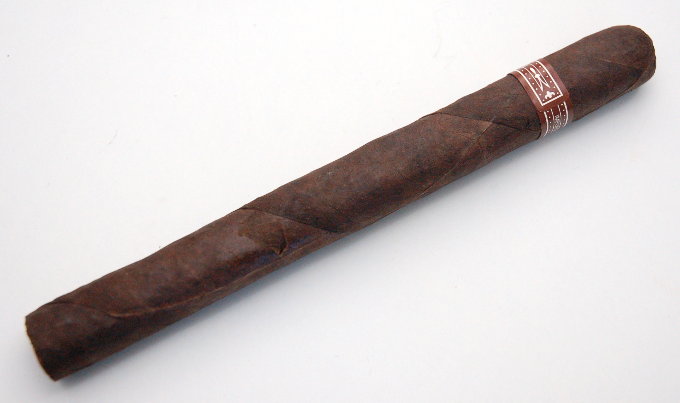 This cigar has been given a soft box press, and features a simple single cap. Some people peel them off. I opted to clip off mine.

From the wrapper I get aromas of leather, earth, and barnyard. From the clipped cap and foot I get leather, barn yard, and light hay. The draw is free and open, and tastes of earth and spices.

I bust out the lighter and start toasting.

Upon first light I’m assailed with a blast of red and black pepper. After the first couple puffs, I get rich earth, cocoa, light cream, leather, and wood. Pepper on the finish. This cigar doesn’t waste any time. 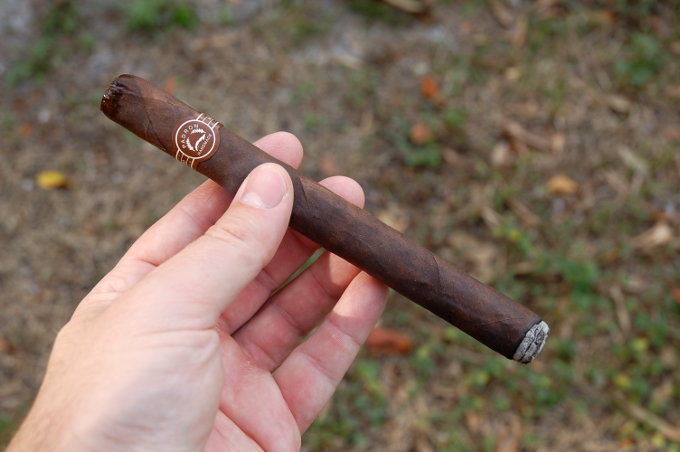 10 minutes in the phone rings. A call from a good friend. I decide to take the call, put a pause on the review, and let the cigar rest on the ash tray until it goes out. Oddly enough it leaves an aroma of burnt marshmallows.

After the call I tap away the half inch of ash and light her back up. Where were we?

Cedar, cream, and a sweet chocolate flavor. Lots of spice on the retrohale. A beautiful sweet aroma wafts from the foot. I love the way a Padron smells as it burns. An amazing bready aroma. If Padron made a candle I’d order it by the gross.

The finish is earthy and spicy, and it lingers in my mouth. I’m getting some darker earth and coffee flavors now. The complexity appears to be building. It’s a medium full bodied cigar. And we are only an inch or so in. 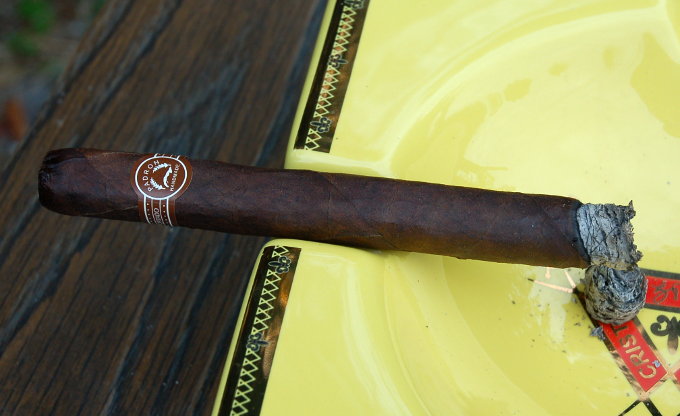 The burn line is pretty even. It probably would have been perfect if I didn’t let the cigar go out. It is producing tons of smoke. Large plumes with every puff. These may look rustic, but I have never had a bad experience. They are the most consistently good cigars I’ve ever had. Even right off the truck.

As I look down I see that the burn line is getting a little wavy. It figures. That’s what I get for opening my mouth.

I’m still getting some cream supported by a core of dark baker’s chocolate, earthy flavors, and indistinct wood. The finish continues to be spicy with a earthy tobacco taste.

The ash does not hang long, and my tray is collecting half inch chunks of salt and pepper ash as we cruise through the second third.

We had some wind when I first started smoking, but now my back yard has grown eerily still. It’s 20 minutes to 5 now. The shadows are long, and I hear a lone cricket chirping in my neighbor’s yard. Off in the distance a siren wails. Another snow bird probably drove their Buick into a drug store 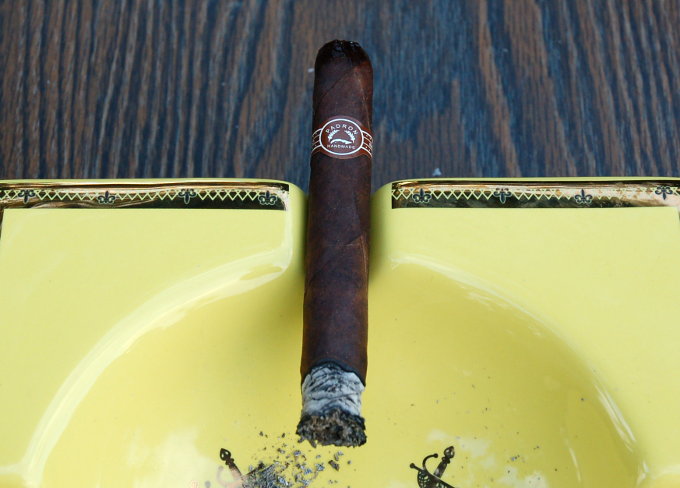 To be honest I’ve never noticed any crazy transitions with these thousand series Padrons. I’m hoping to pick up on more flavors now that I’m reviewing one. The process forces me to focus all my attention on the cigar. I’ve enjoyed writing a handful of reviews, and I think I may be hooked.

Whether people will enjoy reading these reviews remains to be seen, but I’m at least enjoying the process of putting them together.

As we near the halfway point I’m still getting those same core flavors. The aroma is a sweet natural tobacco smell.

I have always appreciated the way you can set one of these cigars down for a minute or two and pick it back up without a problem. It’s not a finicky cigar. It just works. You could probably smoke this thing under water. It’s like the Glock of the cigar world.

I’m getting a mild nicotine buzz. No where near a head spin. Just nice and relaxing. I don’t smoke cigars for the buzz, but I have always appreciated the relaxing aspect of a cigar. I smoked a few cigarettes in college and they always amped me up. Cigars, on the other hand, always wind me down. 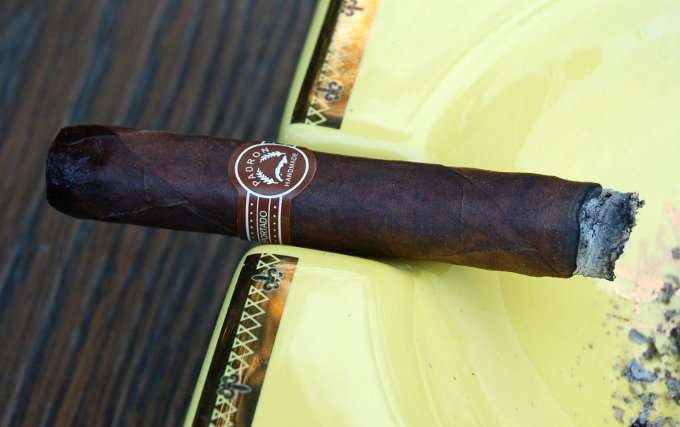 The cream has backed down and black coffee is coming into the fold. Earth, semisweet chocolate, coffee, and pepper are the dominant flavors. Pepper, wood, and fennel on the retrohale.

Mr. Tape Measure informs me we are a little past halfway through and heading towards the final third. My OCD is in full effect. Oddly enough, an almost full moon peeks through the clouds.

In a cruel twist of fate the Churchill Maduro requires a relight. I need to stop waxing poetic about how well a cigar is smoking. At least until it’s done. I’ve been through a couple dozen of these with no issue, but of course the one I grab for review is the exception to the rule. I’m going to blame it on putting the cigar down for the phone call.

Smoke time is a little over an hour. Hard to tell exactly because I forgot to set my watch when I started. Whoops.

I’m getting a mouthful of full bodied flavors. Coffee bean, earth, and baker’s chocolate. Plumes of gray smoke roil from the cigar with every puff. The band is loose and it’s sliding around like a drunken sailor. The finish is long and is mostly a dark tobacco flavor with pepper. 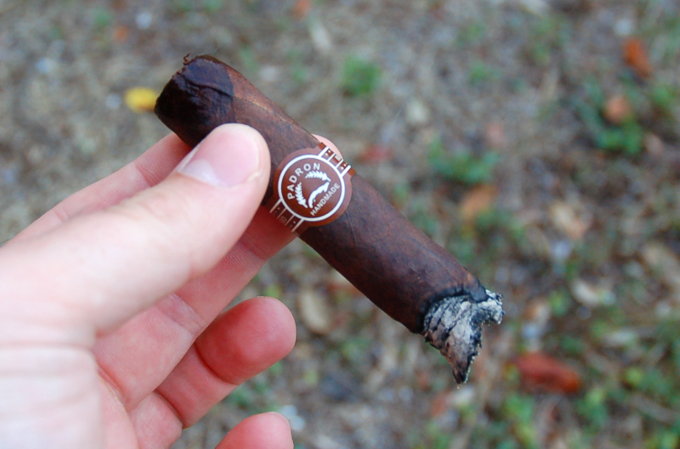 The sun is behind me, dropped below my neighbors house and trees. No sunset cruises at my house. A single ray of gold colored sunlight filters through the trees and lands on the roof. In the distance the trees are tinged in gold from the setting sun. I watch the light fade as the clouds roll in. I love smoking outside. Nothing else allows me to enjoy the simple things in life like a good cigar. To me that is what cigars are about. Enjoying life.

Our flavors are Steady Eddy. I don’t know how guys like Katman pick out so much out from a seemingly simple cigar. Years of study and experience. Or a bullshit artist of the highest caliber. I think it’s the former. Perhaps after 1000 cigars our young Padawan Dan will too become a Jedi.

Suddenly I smell vanilla. Somewhere in a parallel universe a fish sprouts legs and wallows onto the shore. A heron plucks it from the sand, and just as quickly the vanilla disappears into the ether.

Back to the dark and toasty flavors. We are losing light, and it’s harder to take pictures. Unsweetened tea joins the party. I decide to remove the band. It comes off easily. 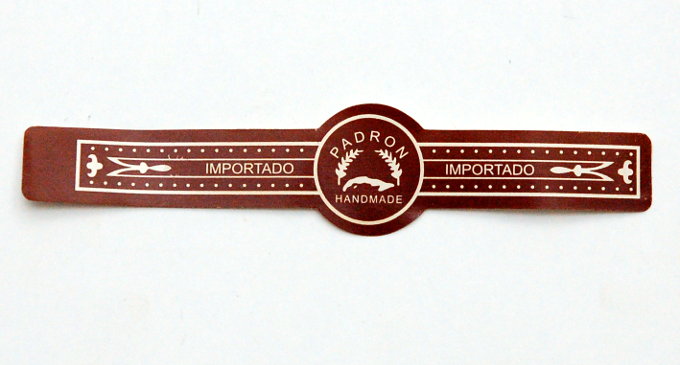 On the subject of bands, I happen to love the simple unpretentious band that Padron uses for their 1000 series cigars. It’s one of my favorites, and is a true hallmark of quality.

I take a draw and smoke envelopes the nub of my Churchill Maduro. The smoke is getting warm, but it’s welcome as the air dips into the low 60s. 63 in December, and people are walking around in scarves and parkas. The rest of the country laughs.

As I take this down to the nub I continue to get plenty of earth, coffee, toast and black pepper. Lots of smoke. The flavors slowly fade and grow bitter.

I decide to end it with a half inch remaining. It’s basically dark now. The cigar ends full bodied and medium strength.

My final photograph of the nub is unpresentable, so I’ve left it out of the review.

The Padron Churchill Maduro is a great cigar. It lacks the transitions and complexity of Padron’s anniversary series, but it never fails to satisfy when I want to smoke a cigar casually. And you can get these on sale for $5 or $6 a stick. Not bad.

Some people get tons of complexity out of these entry level Padrons. I’ve never noticed that. Minimal transitions and simple Nicaraguan flavors make for a pleasant maduro experience. That’s about it for me.

This is a cigar I reach for when I want something that will smoke trouble free. It’s absolutely perfect for cigar friendly gatherings, and activities where I don’t have the ability to concentrate fully on what I’m smoking, yet want something good and reliable.

I’d say it’s a box worthy smoke. I think I’ll always have something in the Padron thousand series on hand. Whether it’s this or the 2000. It’s a workhorse cigar.

I give it a “2” on the 0-2 scale. Box worthy and deserving of anyone’s regular rotation. On the 100 point scale I give it an 88. It doesn’t stimulate my brain stem with a litany of flavors and wild transitions, but it is entirely relaxing and consistently good. You can’t go wrong with the Padron Churchill Maduro.