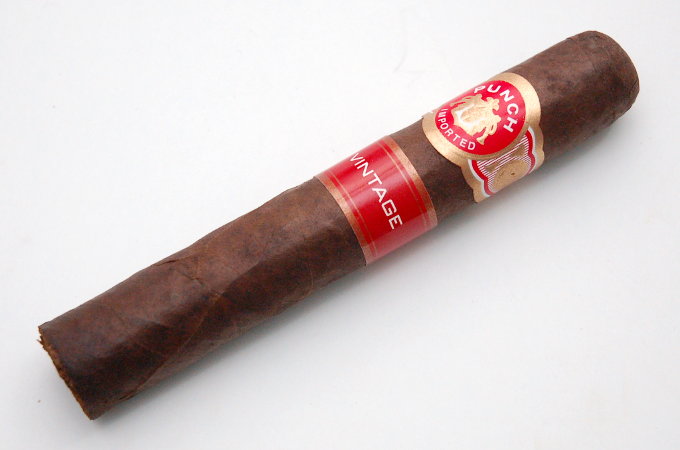 The Punch Vintage appears to be a line exclusive to Holts.com. Like the short belicoso Trinidad Reserve I reviewed a few days ago, Holt’s must have picked these up on clearance or something.

There is little information on the Punch Vintage series and not much in the way of reviews. According to Holts, these are Honduran cigars, aged in cedar cabinets for a year. They offer the cigar in natural and maduro versions. 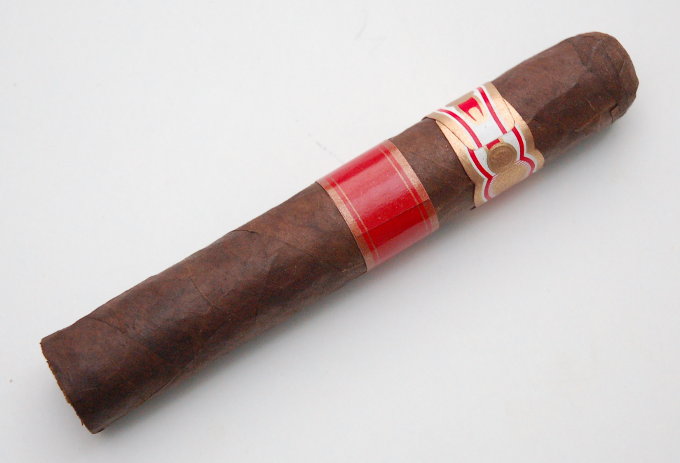 I paid $3.30 per cigar for a 6 pack in late September 2017. So these cigars have had about 3 months of humidor time on them. I tried smoking one shortly after I got it, and it was a mess. All sorts of burn problems. I tried one a few weeks ago and it was a much better experience.

The cellophane on this cigar is fairly clear. Maybe a slight tinge of yellow.

The Punch Vintage comes in a dark brown wrapper. There is little in the way of oil or tooth. Seams are fairly tight, and there are a number of visible veins. A double cap has been pasted on the head of the cigar. The pack feels hard and even. I store all my cigars at 65 RH, so there isn’t much give to it. 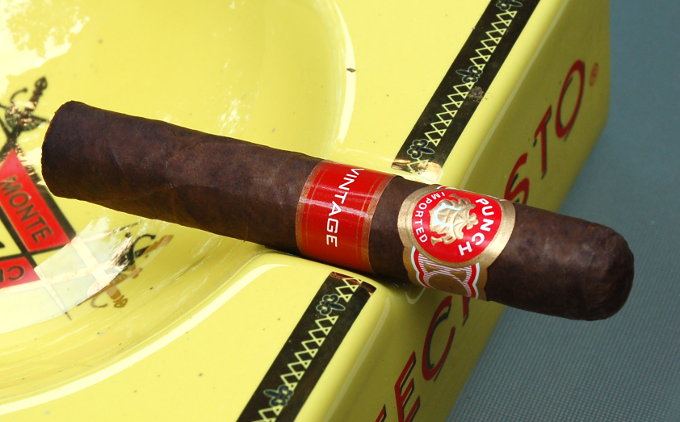 This is a rustic cigar and it isn’t going to win any beauty contests.

From the wrapper I smell barnyard, cedar, leather, and a faint fruity flavor. Sweet earth and barnyard from the foot. I clip the cap and the cap falls off the cigar. That didn’t happen with my other Punch Vintages. It didn’t effect the way the cigar smoked. 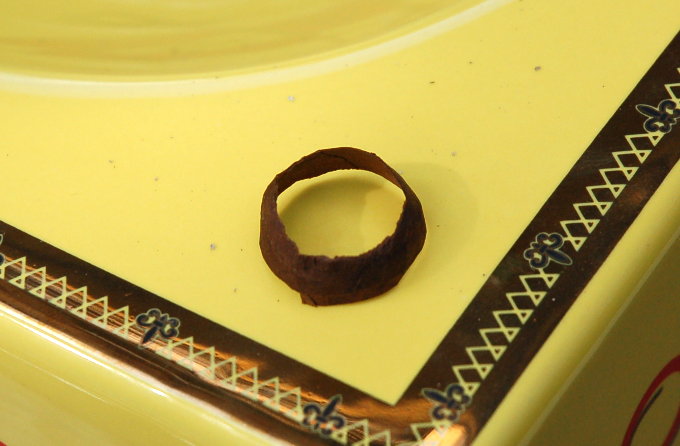 Wood, malt, and an indistinct fruit flavor on the pre-light draw.

The first flavor I get is black pepper. Then earth, cream, nuttiness and a sweet malty flavor. Leather on the finish with some spice. It’s a good start.

The weather has been less than ideal. Temperatures are down to the low 50s, which isn’t a problem, but wind has been gusting up to 20 mph today. A real problem if you are smoking outside like I am. 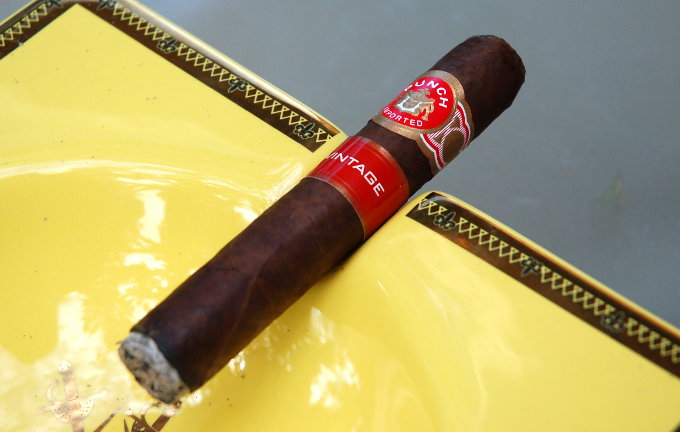 I’ve snugged myself in to a protected section of the back yard. It’s a corner up against the house. Not much wind is getting back here, and the sun is trying to come out, so hopefully we will have passable conditions for a review.

10 minutes in and we are continuing to get nice medium full bodied flavors. There is a sweet nuttiness to the cigar, I think it’s hazelnuts, supported by a deep earth flavor, wood, cream, and hints of leather. Leather or some other umami rich flavor. I’m getting a light fruit note on the retrohale, and plenty of spicy red pepper. The pepper lingers on the finish with a charred wood flavor.

The aroma is sweet, but it’s short lived given the gusting wind. I have to hold the cigar under my nose to get a whiff.

I don’t remember this cigar being this good a few weeks ago. Granted I was on the beach reading a book when I last had one of these, but 15 minutes in and we have barely burned half an inch. The ash is a fine light gray, and the burn line is fairly even. Nothing needing a correction. 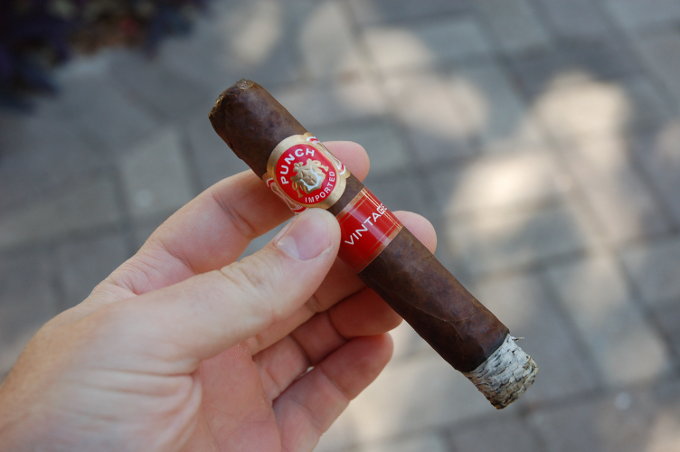 I’m getting the cedar now. Lots of cedar, backed by earth and cocoa, and cedar has become the strongest flavor. The pepper has backed off. The ash falls off in a 3/4″ long chunk. A nice flavor transition 25 minutes in.

We are 30 minutes in to the Punch Vintage, and I am being continually rewarded by rich medium bodied flavors with a long woody finish.

At this point the cedar has shifted more to a tea flavor. It’s borderline fruity and is supported by toasted nuts and chocolate. The pepper has returned to the retrohale, but isn’t in the finish. The cigar is smooth and not bitter at all. I perform a minor burn correction with my torch lighter, and the singed wrapper releases a sweet toasted marshmallow aroma. 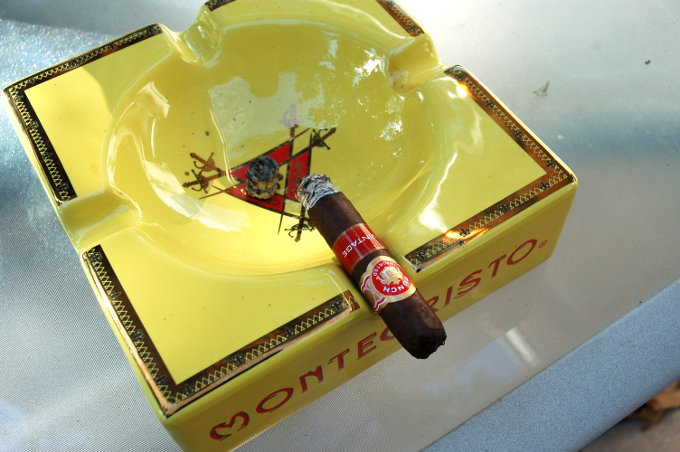 The sun hangs high overhead behind a ficus tree and dapples my patio with shifting light. The wind chime on the other side of the yard is on overdrive.

The tea flavor is shifting into more of a true fruity flavor. I’d say apricot. Still plenty of lightly toasted nuts and chocolate.

My biggest beef is with the two cigar bands. They are moving around on me. If I wasn’t reviewing the cigar I’d have taken them off from the start. But it’s better than the bands being glued to the wrapper.

This cigar is a good example of the importance of humidor time and rest. Even if these have been aged in cedar for a year, a couple weeks off the truck I had trouble keeping this stick lit. 3 months later and we are doing much better.

Strength is at a medium. The cigar is relaxing.

Yesterday was windy, overcast, and damp. Intermittent rainfall. Nothing heavy, but enough to deter me from a cigar. 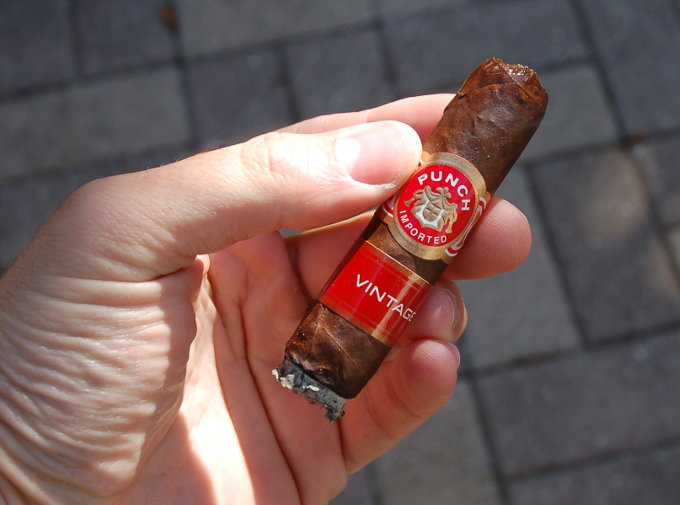 The apricot flavor has transitioned again. Now I’m getting either prunes or raisins. I’ll be damned. This little cigar is offering some nice transitions. It continues to be backed by a core of earth, chocolate and wood flavors.

Unfortunately the ash lands on my lap and keyboard. The burn marches steadily towards the first band. We are getting some full sun which is hopegfully making for some nice pictures. I decide to pull off the first band.

Here are the flavors: baker’s chocolate, raisin, earth, cedar, and indistinct wood. No pepper or spice now. I’m getting a slight bitterness at this point, which is the baker’s chocolate. The finish is light natural tobacco, weak tea, and wood.

The burn is wavy and could use a minor correction. I give the offending section a light touch up and we are back on our way. 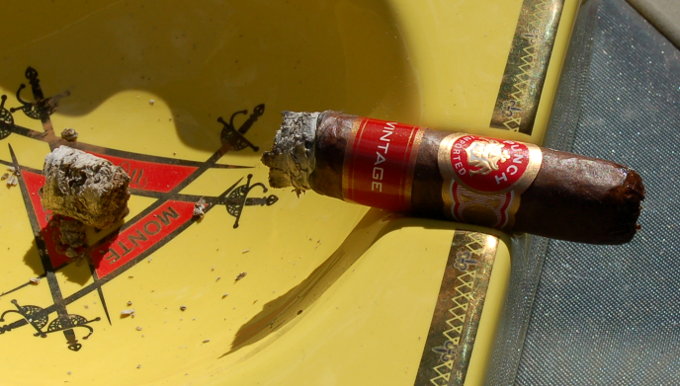 Given the wind I have been retrohaling most of my puffs to pick up all the flavors I can. The combination of cool weather and retrohaling has me sneezing a bit. But no pepper. Still, the Vintage has a sinus clearing quality to it.

Nuttiness returns to the mix. Toast creeps in and the spice dials up ever so slightly. The flavors are smooth and the smoke is cool. I bask in the afternoon sun like an alligator, slowly digesting this Punch Vintage.

The ash has been sloughing off in half inch to inch long chunks. It doesn’t hang very long, but remains a pale gray.

We are approaching the second and final band. What’s odd about the bands is they are made differently. The first band is shiny, and is made of thicker paper. The second band is matte finished, embossed, and traced with gold. This must be their standard band. The “Vintage” band appears to have been made by a different printer. 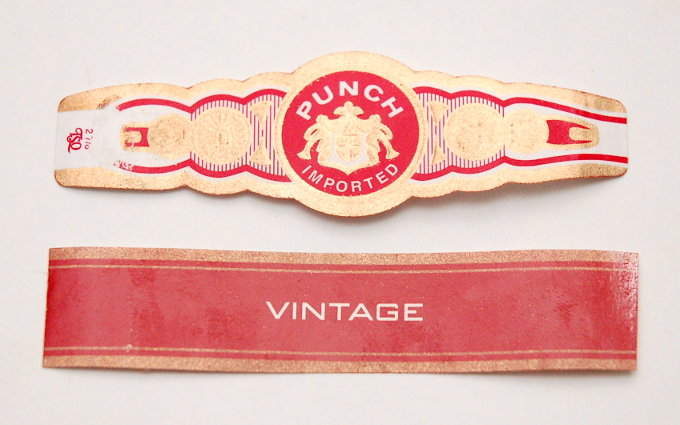 It has been 30 minutes or so since I started this final third. The burn has slowed down, and the flavors haven’t changed much. Not a problem, as I don’t mind the flavors, but given the transitions earlier on I remain hopeful that we get a change in the final inch.

Overhead the sun has been covered completely by thick gray clouds. I see a single patch of blue. The wind continues to stir, but I’m mostly protected in my corner of the patio. 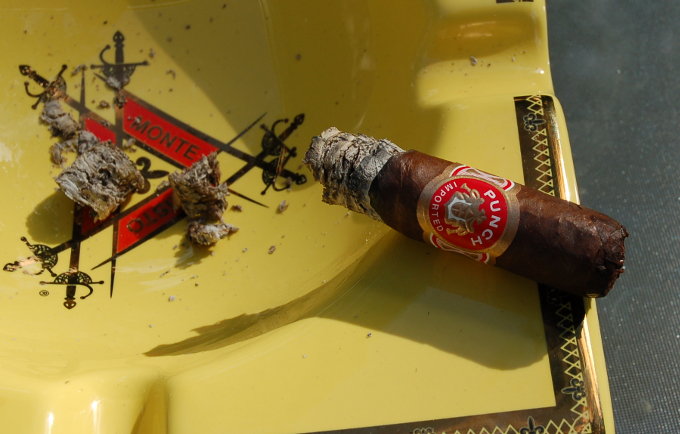 The bitterness has stepped up more and remains on the finish. Not coffee. I would compare it to a strong cup of tea. The smoke is getting warmer. The flavors have lost their nuance, and the burn has grown wavy. I think we are nearing the end of this one. It’s 10 minutes to 3. I wouldn’t have guessed a near 2 hour smoke, but the clock doesn’t lie.

I do a final burn correction and see if there is anything left in the tank of this Punch Vintage. I get some dark fruit, I think this is a result of burning a swath of the the broadleaf binder. The raisin re-emerges with some dark earth, but that’s about it. 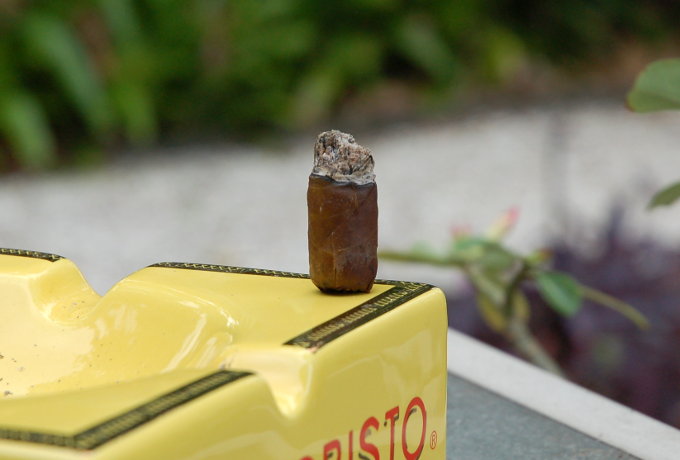 The strength has picked up and I’m feeling light headed. I end the cigar just short of the 2 hour mark.

For under $3.50 a stick I’d say this Punch “punches” above its weight. Nice medium full flavors, some transitions, and decent burn qualities after 3 months of rest. Despite windy conditions the cigar never went out on me, and only needed a couple minor touch ups until the end. It was medium body, and medium to full strength towards the end. And good smoke output throughout the stick. All in all, a satisfying smoke.

Here is my constructive criticism: The final third hung on too long, and the cigar didn’t finish as strongly. Typically a robusto is good for an hour and a half smoke for me. I was not expecting 2 hours out of this one, and I could have done without the last 30 minutes of the cigar. The ending was a let down relative to the rest of the cigar.

For those on the fence I would say this Punch Vintage it’s well worth your money at a good discount. I enjoyed this cigar and am glad I few a few left in the humidor for long term evaluation. Recommended and it scores a “1” on my 0-2 scale. I’d buy it again, and could see the value of buying a box or bundle.