I got the idea to buy this cigar based on recommendations of others on the internet, and because this was Cigar Aficianado’s #2 cigar of the year for 2016.

Rocky Patel is a manufacturer that is known for producing a bunch of bargain basement blends, and private labels cigars for retailers to create their in house blends. Subsequently many of their cigars are heavy on style, but short on substance. Kind of like Ghurka. Consequently, I don’t see myself reviewing a ton of RP blends in the future, but this Sun Grown Maduro received high accolades and I bought a 10 pack on my quest for good cigars.

I know they have a few good blends in their roster and the Sun Grown Maduro is near the top of the pile.

The Sun Grown Maduro is an attractive box pressed stick with a dark brown wrapper, tight seams, minimal veins, and a neatly applied triple cap. The box press is severe, to the point the cigar has been squished into a rectangle. It’s not a perfect press, with some sharp corners and some rounded. Check it out:

I’m not a big fan of squeezing my cigars, but the Sun Grown Maduro feels light for its size and evenly packed. 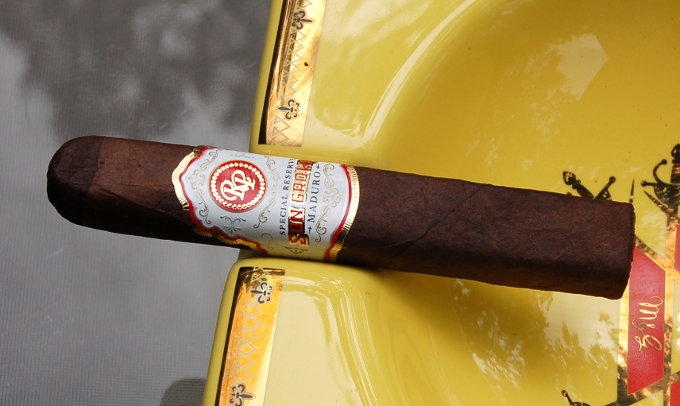 Smelling the wrapper of the cigar I get a combination of deep cedar, barnyard, and leather flavors. It is a nice rich smell. From the foot I get lighter hay, cedar, and earth. I carefully clip the cap and on the prelight draw I get earth and a strong plum flavor.

I proceed to toasting and light her up.

Start time is 12:15 PM. For whatever reason one corner of the foot is stubborn and it takes a couple attempts for the cigar to get fully lit. The first puff or two is bitter and it takes a few minutes for the Sun Grown Maduro to calm down.

Once it gets going I am treated to a core of earthy flavors supported by chocolate and a light fruit. I am also getting a fruity flavor on the retrohale. The finish is long, and at this point I’m mostly getting tobacco, wood, and cocoa. 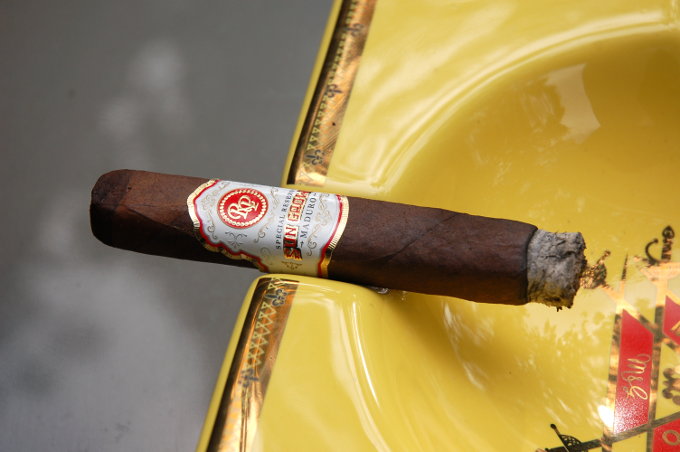 It’s another windy day in paradise. I chose this RP Sungrown Maduro in part because I still have a handful of them left. If the wind becomes too much I can always try to review this cigar another day. But I’m tucked in a protected corner behind my house.

I think we are OK for now, as this cigar is smoking nicely. We are 10 minutes in and the burn line is relatively even. The half inch or so of ash is a light gray. Smoke output is plentiful and life is good.

The only thing suffering is the room note or aroma of the cigar. It is quickly whisked away in the breeze. A shame because holding the lit cigar under my nose offers lovely aromas of bread, cocoa, and sweet tobacco. 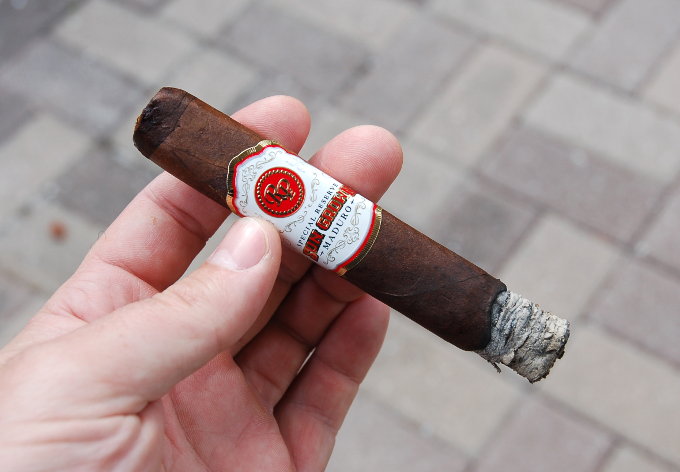 I am getting pepper on the retrohale now. Still mostly chocolate and an indistinct sweet fruit on the draw flavors. The finish continues to linger. Creaminess is coming into the fold, and the combination of the sweet flavors and the compact rectangular shape reminds me of smoking a candy bar. It is a pleasant start.

The fruitiness is the dominant flavor, and it is only intensifying. I’m getting something of a strawberry jam now. It has an element of sharpness that hits you front and center on the tongue. Earth, chocolate, and cedar play a supporting role.

Overhead the clouds are rushing by. It was overcast this morning but big patches of blue sky are emerging. The sun is behind clouds and a stand of tall Schefflera trees. The once grey backyard is now erupting in light. It draws a nice parallel to the cigar, which is erupting in a fruit leather flavor. 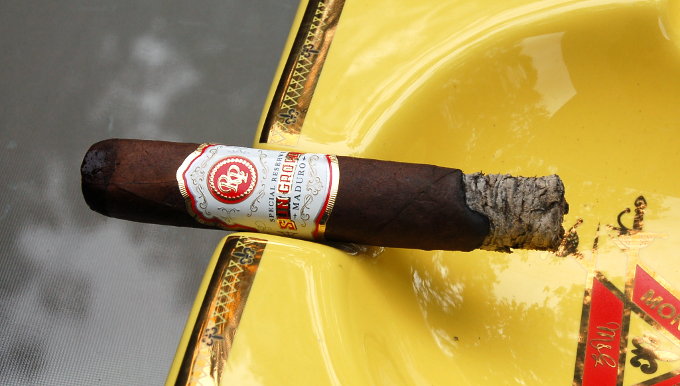 I take another puff and the fruit is suddenly replaced by a distinct nuttiness. Interesting. It is backed by complex malty flavors that are tough for me to describe. A minute later I puff again and the fruit is back, but more subtle than before. Another puff yields that intoxicating combination of fruit and chocolate. Nuts play a supporting role.

The cigar has been a solid medium body throughout the entire first third. Not noticing anything in the way of strength.

The burn has become uneven by 3/8″ or so. The ash is hanging on by a thread. I knock it off and offer the cigar a light correction with my torch lighter.

Smoke time is right at 30 minutes.

The flavors are continuing on from the first third. Chocolate, nuts, cedar, earth, sweet tobacco, a delicate fruitiness, raisin, and a light dose of black pepper on the back of my mouth and tongue. The earth, tobacco, and pepper finish lingers.

Once again the burn has gone a little wonky. This is not something I noticed in prior cigars. It may have something to do with the wind. While we are mostly protected here, the occasional gust stirs the contents of my ash tray. I perform another burn correction. 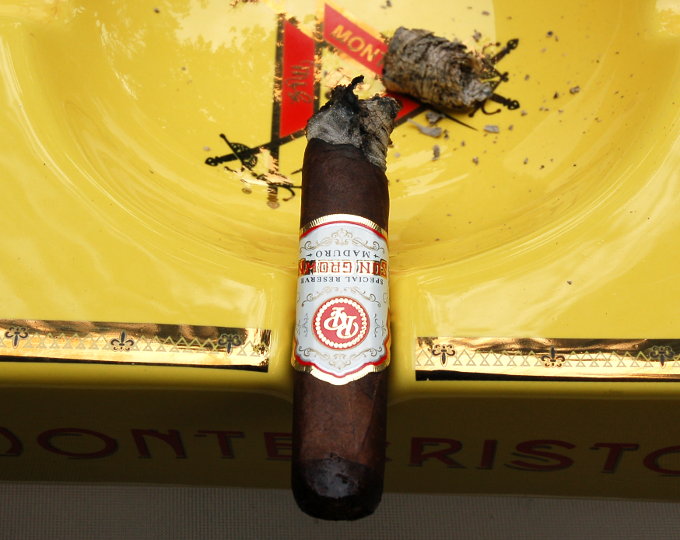 In the distance I see a red headed woodpecker on the neighbor’s oak tree. Gray clouds are back and the blue skies of a few minutes ago are now faint on the horizon.

The fruitiness is picking up again, and so is the cream. The flavors transition slightly from puff to puff, but it’s the same cast of characters. Chocolate, nuts, fruit, and cream. Nothing to complain about.

Strength has also crept up on me. I feel vitamin N’s calming reassurance as I continue on with this Rocky Patel Sun Grown Maduro. Body remains at a solid medium. 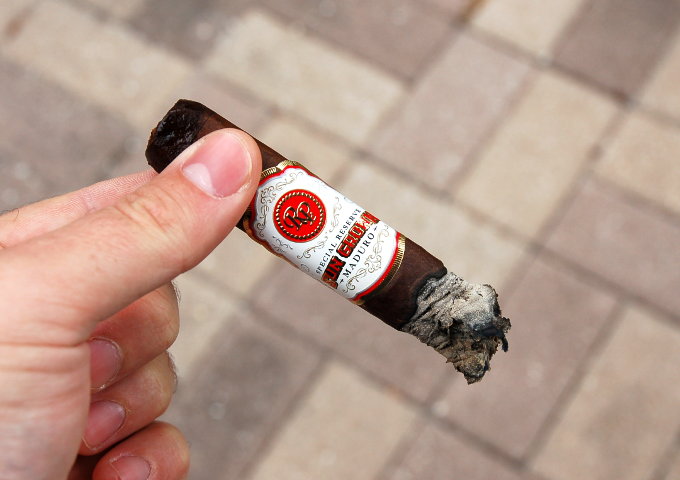 We are nearing the cigar band now. One complaint about the band: it’s large and the glossy texture is slippery. I have dropped this cigar in the past.

I write these reviews “stream of consciousness” style, and amidst my jabbering I allowed the Sun Grown Maduro to go out. Shit. I take this opportunity to pull away the band. It comes off easily and without any damage to the wrapper.

We are at the final third.

Upon relight I am greeted with the same flavors. Maybe a shade darker after the relight, but nothing unpleasant. I am getting a different kind of sweetness now in addition to the fruit. It’s less sharp and is more of a candy sweetness. A true milk chocolate. It is a lovely addition to this cigar.

The naked cigar is beautiful and perfectly smooth. I am digging this Sun Grown Maduro. 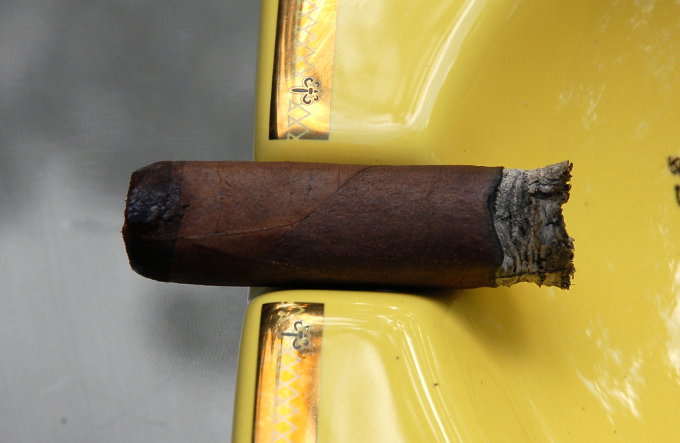 The sweetness becomes intense and beautiful. I haven’t noticed it on prior cigars. The last one I had was maybe a month ago. I enjoy naturally sweet cigars, and the almost syrupy sweetness of this final third is decadent. Double chocolate brownies, rich chocolate syrup – I am about to fall into a diabetic coma. This is as close as I have ever come to smoking a chocolate bar. The fruit flavor from before has fallen away. I am in cigar heaven right now. 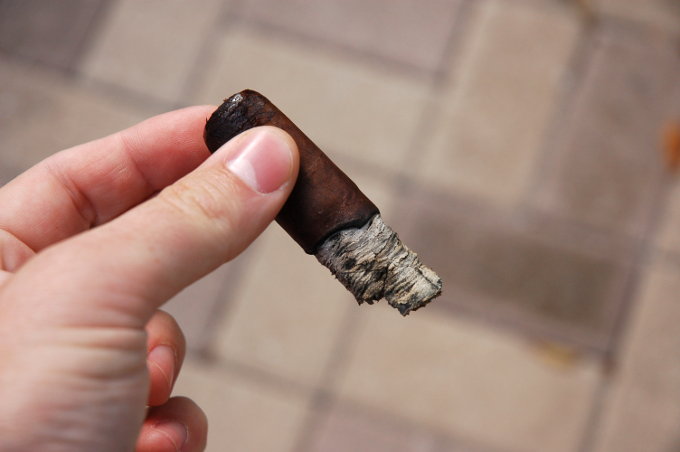 Coffee is now creeping in behind a chocolate bready flavor and aroma. The fruit comes back subtly on the finish.

The strength has continued to build. Nothing crazy, but noticeable. I had a late breakfast of eggs and grits an hour or two before starting. Presently we are just over the hour mark.

A delicate floral aroma teases me on the finish. Still getting plenty sweetness, but the chocolate has tamped down slightly. The sun returns as clouds fly by overhead.

I don’t find myself retrohaling this cigar much. It makes my nose run and I’m loving the flavors I’m getting through the draw. Retrohaling can be a nice way to pick up extra flavors, but I don’t need it here thanks to the intense sweetness on the draw. When I do retrohale it’s mostly floral flavors at this point.

The aroma is an intoxicating sweet brownie. No bullshit.

We have an inch left and I’ll take this one down to the nub if it will let me. I’m getting rasinettes now. I’m not religious, but sweet baby Jesus this final third is good. The body has moved up to a medium full.

Salt and pepper ash has been falling off in chunks every inch or so. The ash has taken a beating in this wind and it has mostly scattered to the 4 corners of the earth. 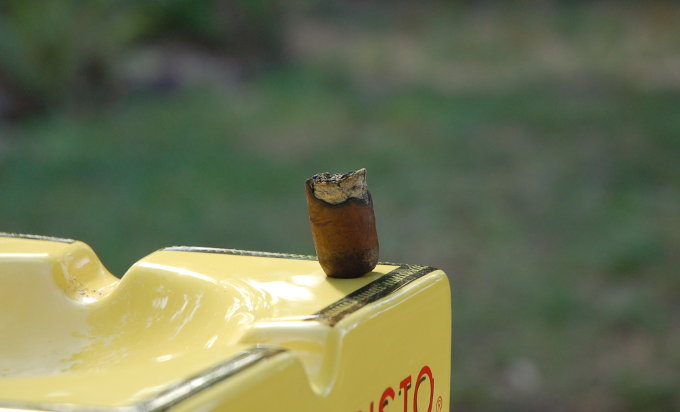 We are under an inch left. The heat has picked up, and bitterness is emerging. The cigar is still good, but the flavors have passed their peak. For review purposes I’ll end it here, but will smoke on this cigar a little longer as I consider my final thoughts.

I have had 4 or 5 of these prior to review, and I must say this was the best one yet. The last third was phenomenal. In the past I mostly got fruit with this cigar all the way through it, but here a genuine milk chocolate sweetness emerged towards the end. Heavenly. I think the humidor rest has only improved a solid and memorable blend. Either that or I picked out a magical version of this cigar. Holy shit that was good.

Cigar Aficionado can be hit or miss. Cigars are subjective, and who knows what economic forces are at play in their “Cigar of the Year” awards. But I’ll say this Rocky Patel is on point and deserving of the high accolades. Although this particular stick required a couple small touch ups and a relight, construction has been consistently good over a sample size of 5, and the flavors are exceptional.

An awesome cigar and I’m glad I have a handful of these left in my humidor.