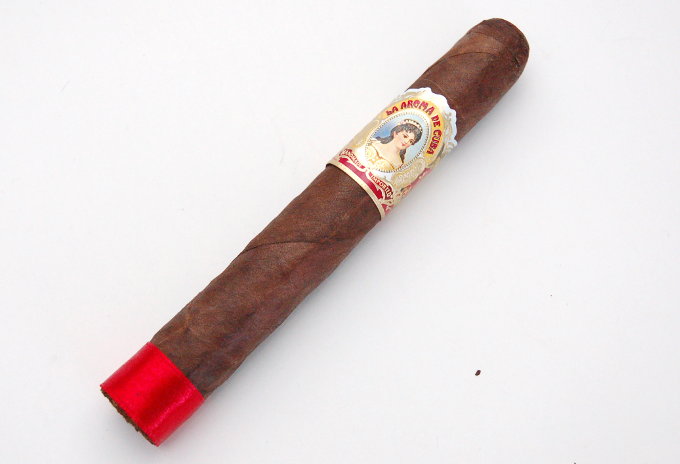 Back again for my second cigar review. This time I’ve decided to try out the Aroma De Cuba in the Toro or “Monarch” vitola. This is the first time I have tried this cigar. I got it as a freebie at my local tobacco shop after spending over $100 like a big boss.

It has been resting in my humidor for as long as my Serie O has, so at least 3 months. This is a sample size of only one, but I’ll give it a shot. 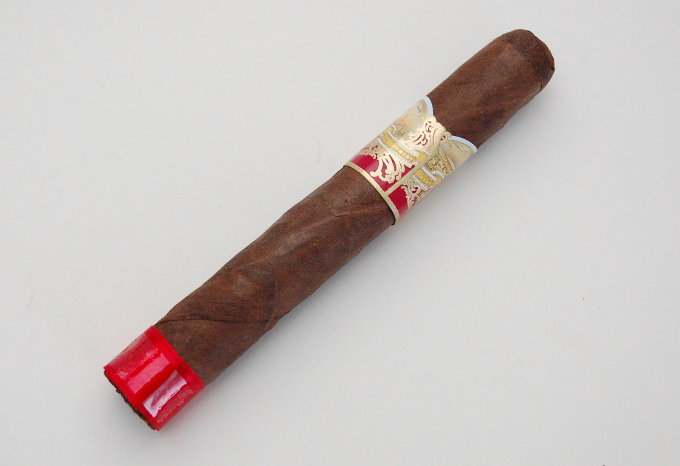 Blended by Don “Pepin” Garcia and made at the My Father Factory in Nicaragua for Ashton Cigars. Aroma De Cuba was originally a Cuban brand, but the blend was redone by Pepin for Ashton not too long ago. I’m expecting good things. We shall see.

This isn’t the most beautiful stick. It’s dark brown with some loose seams and plenty of veins. The band is crooked and is pulling away from the cigar in some spots. A nice triple cap though. There is also a fabric foot band. I sometimes have a hard time removing these, but this one slides off easily.

This cigar has decent heft for its size. It feels evenly packed.

I kept this cigar in the cello, and when I pull it free the cellophane has a slight brown color to it. A good sign. This cigar has been marinating for a while. Hopefully well rested and ready to rumble.

For our pre-light aromas I detect hay and a heavy barn yard smell from the shaft. From the foot more hay and barn yard. I gently clip the cap with my Xikar cutter and test the pre-light draw. A little snug and I’m not able to detect much in the way of flavors. 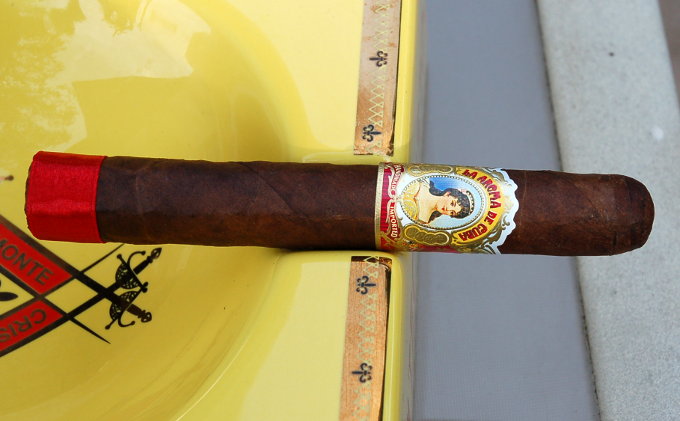 I start toasting and light her up.

Immediately I get chocolate and earth. A slight amount of pepper on the retrohale, but nothing crazy. The aroma has a lovely nuttiness.

We have perfect cigar smoking weather today. 76 degrees with minimal wind. It gets hot as hell here in the summer, but the winters in Southwest Florida are unbeatable. I sit back and let the La Aroma do its thing. 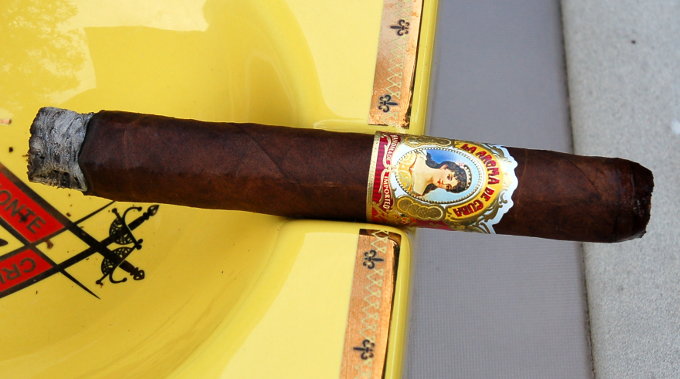 10 minutes in and we have gone through half an inch of the cigar. It is burning evenly and throwing off a nice amount of smoke. Flavors are earth, wood, chocolate, spice, and light nuttiness. More spice and nuttiness on the retrohale. An enjoyable medium bodied blend, but nothing crazy so far.

The ash is solid and light gray in color. I’m getting a long spicy finish here with hints of chocolate.

This time around I used a leaf blower on the patio and wiped down the table prior to the review. Production values are going up. Way up.

The flavors are shifting a little. Less chocolate, more wood. Smokiness on the finish. Lots of spice on the back of my throat. The Monarch has me reaching for my water. I started 10 minutes before 3, and we are at about 3:20 now. Half an hour in. The ash falls off in a 1 inch chunk.

I’m getting some creaminess now. And plenty of pepper. This is on top of the earthy flavors. Wood and spice on the retrohale. The pepper is what Mr. Garcia is known for, and the La Aroma maintains expectations. The Monarch leaves a long pepper finish in my mouth. 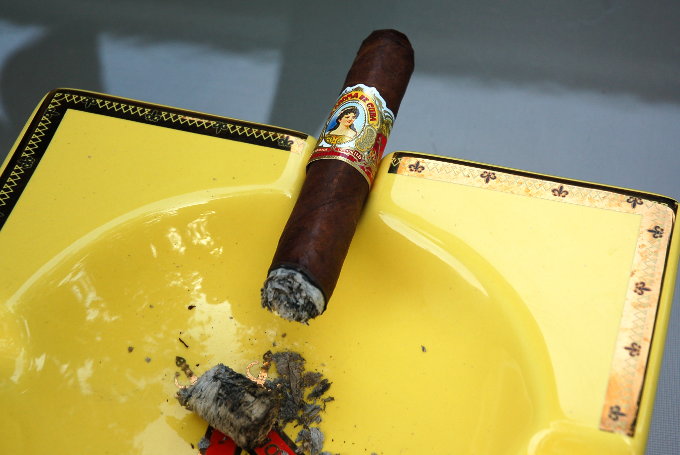 The burn so far has been great. A slight wave, but nothing near needing a correction. I can let this cigar chill for a minute and peck away at the keyboard. It emits a beautiful sweet aroma, and yields plenty of smoke when you take a puff. Perfect. I love a trouble free cigar. Hopefully I don’t jinx myself.

My back yard is still. Birds chirp in the distance and I can hear an occasional car pass by.

Unless I can get home from work early I typically only smoke on the weekends. I like to smoke during the day in my backyard, or at the beach if I’m feeling froggy. Smoking a cigar on the beach reminds me of why I moved Florida. It’s one of life’s little luxuries.

I probably average 2-3 cigars a week. Not a ton by some folks’ standards. Part of me would like to be able to smoke more, but I also enjoy looking forward to my weekend cigars. It makes the experience special.

This La Aroma De Cuba producing a lovely melange of flavors. Still medium bodied, but it has developed some complexity as we head towards the halfway point.

The foot smoke is intoxicating me with its scent, but thankfully I’m not being intoxicated by nicotine. I don’t mind a good buzz, but yesterday’s Serie O took things a bit too far. I was on the couch for a good 30 minutes after that one. 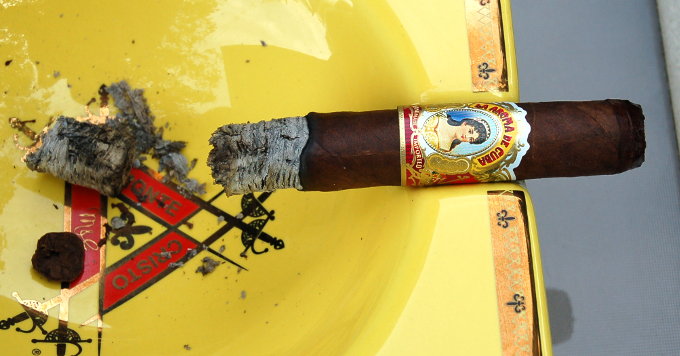 I’m getting some rich earthy flavors. Subtle sweetness on the retrohale. The cigar is changing. Nuttiness weaves in and out. A hint of mint, but fleeting. Chocolate and earth. This is a smooth cigar. It continues to burn trouble free as it moves towards the band.

The ash is about an inch and a half long now, and curving towards the left. There is a dick joke in there somewhere, but I’m far too classy to consider it.

Still getting some creaminess, but the cigar is moving to full bodied territory. Bakers chocolate is coming through now and I detect the bitterness. Still getting nice nutty flavors on the finish, and the spice has backed off slightly. It’s there, but doesn’t hang on to my tastebuds for as long.

The late afternoon sun breaks through the trees and the Aroma De Cuba Monarch glistens in the light, but photograph doesn’t catch it.

We are just over an hour in. The second chunk of ash falls off cleanly and I go to remove the band. I was afraid that band glue would be stuck to the wrapper, but it tugs free with minimal effort.

The band on this cigar is intense. Lots of gold filigree with scenes of the Cuban countryside and harbor sandwiched between an old world hottie. Agriculture and trade. Good universal themes for cigars. The gal isn’t quite my type, but c’est le vie. The band compliments my ash tray nicely. Still waiting on those royalty checks from Montecristo… 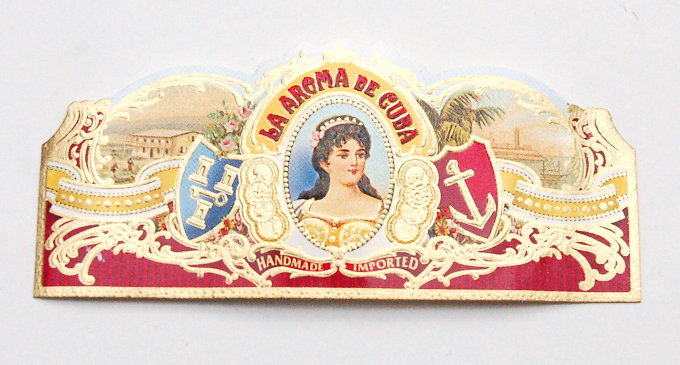 Smoke pours from the foot as if you opened the door to a dorm room.

I’m getting some cedar and wood now on the draw, replacing most of the creaminess. Still plenty of chocolate and earth. Still some spice, but my eyes aren’t watering and I haven’t had to reach for my hankie. The toasted nuts are subtle, but continue to wend their way through the blend. A long coco finish with a pinch of pepper.

The sun departs as quickly as it arrived. This back yard gets plenty of shade in the afternoon. Hugely important in the summer, but I wouldn’t mind a few extra rays this time of year. 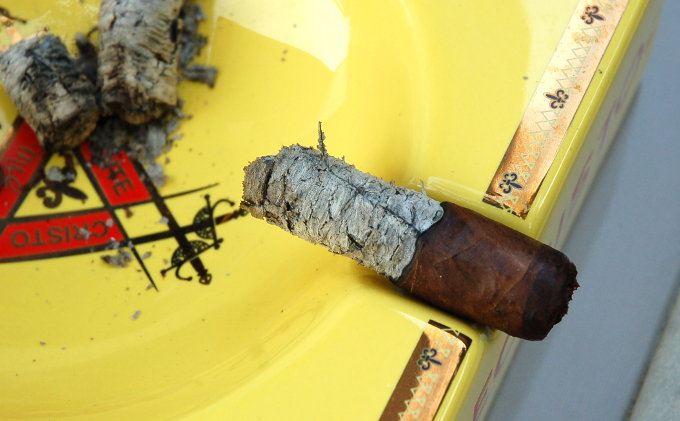 Another transition. Red pepper hits the front of my tongue. Bitter chocolate and earth on the finish. It’s a full bodied cigar now. Is the Monarch building up to a final crescendo? This cigar has been good, but nothing mind altering.

One thing I can’t complain about is the burn. It’s perfect, producing plenty of smoke and a lovely light grey ash. I took a gamble for my Saturday afternoon smoke, and it has large paid off. Plenty to enjoy here.

A couple osprey circle and swoop in the distance. They eventually settle on my neighbor’s sea grape. We don’t see many osprey here. They tend to favor the water. A rare treat.

The finish is still long on this cigar. Baker’s chocolate, wood, and a hint of leather if I search for it.

The heat picks up slightly with an inch and a half left. The entire cigar is growing warm to the touch. Firm, but beginning to give beneath my fingers. I’m smoking too quickly and give the Monarch some extra rest.

A light fruitiness teases me on the retrohale. Hard to pin point it. The flavor doesn’t linger. Toasted nuts come and go. 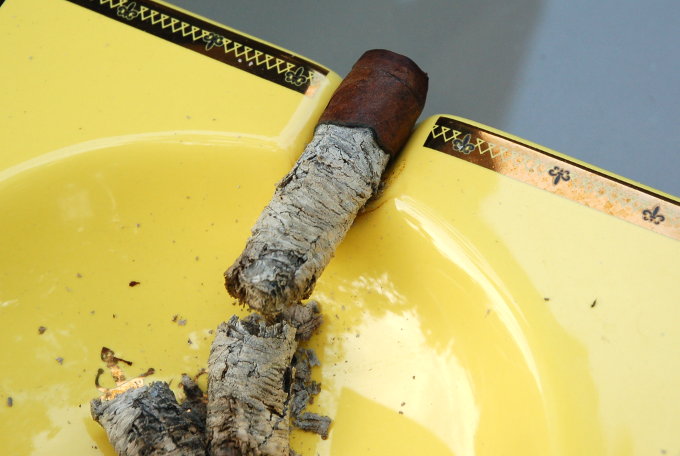 An inch or so left and I get a blast of bitterness. Dark semi-sweet chocolate and earth. My mouth puckers. The flavors morph and concentrate. The cigar is alive.

The ash is as long as the cigar itself now. The ragged end of the ash is beginning to flake into my lap. The closest we will come this year to a South Florida snow storm. I’m too relaxed to care.

I’m mostly getting bitter dark chocolate, coffee, and pepper now. A little anise as well. I am enjoying these new developments. It’s a nice way to close out this stick.

The ash continues to hang on. A good inch and half. I take draws gently so as not to disturb it. Cracks are forming in the ash. Hopefully the entire cigar doesn’t tip into the ash tray in between puffs. It’s still eliciting toasty and bitter notes. That subtle fruitiness darts in and out as I take this down to the nub.

This La Aroma De Cuba didn’t look particularly good but it smoked like a champ. Senor Garcia has some mighty fine torcedors at his disposal. The ash is approaching 2 inches. I snap another picture for posterity. As if on cue the ash finally falls away. Three solid chunks for this 6 inch stick. Well done. 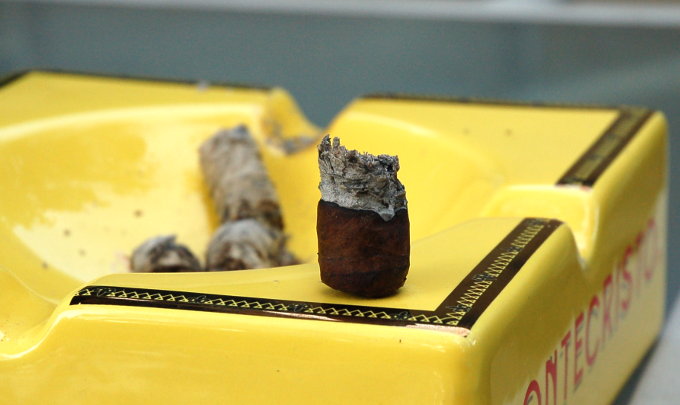 The flavors are dark and bitter now, but with half an inch left it’s all gravy. I don’t nub all my cigars, but will when they cooperate. It’s too hot to hold for more than 15 seconds or so unless I inch my fingers back to the shoulder of the cigar.

For a free cigar I did great. The La Aroma offers a core of pleasant flavors with some surprises mixed in. Not a ton of complexity but good flavors, lots of smoke, transitions, and excellent construction.

Ashton was smart to retain the services of Pepin Garcia to breath new life into this old brand. Having never tasted the Cuban variety (or the non-Cuban Pre-Pepin Blend), I couldn’t tell you how this stacked up to the cigars of yore, but I think the La Aroma De Cuba stands tall on its own. A good medium to full bodied cigar with a couple tricks up its sleeve. Is it a life changing cigar? No, but it’s a solid smoke. Good at MSRP, and an excellent value if acquired for $5 or less.

I would rate this a solid “1” on the 0-2 point scale. I’d buy it, and would certainly fish another out of the freebie bin if my local tobacconist were to offer it again. Not sure I would grab a box, but I wouldn’t kick this one out of bed for eating crackers either.

It could be a daily smoke if you average more sticks than I do on a weekly basis. Recommended.