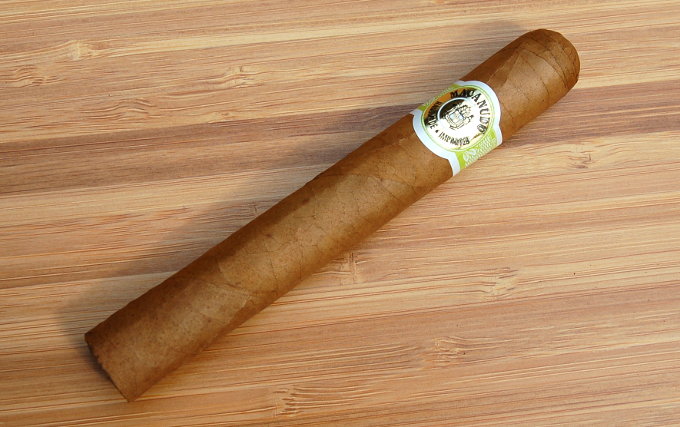 Back in September I was gifted a 5 pack of Cigars from Stinky on Puff.com. Puff is a nice cigar forum. I remember when it was “Club Stogie” back in the day. I did a lot of buying and selling of vintage pipe tobacco on there. At any rate Stinky was cool enough to send a number of people a pack of cigars. His only request was that we pay it forward or write a review. Happy to oblige. 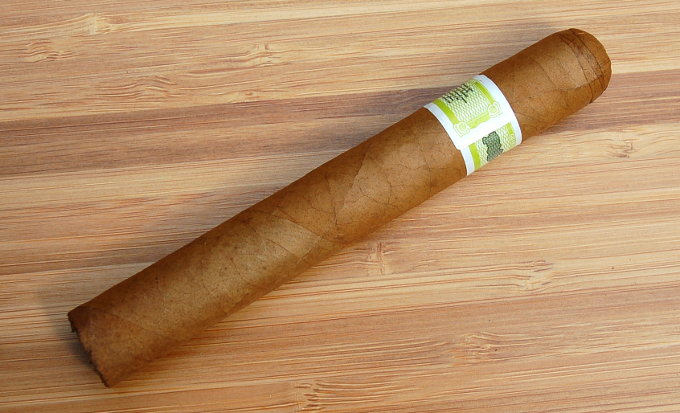 I thought I would start out with the Macanudo Cafe. Macanudo makes a notoriously mild cigar aimed at beginner smokers. It has been a long while since I’ve had one. The Macanudo Cafe is the quintessential Macanudo cigar, as this was their first offering. This is the one that started it all for the company. It’s supposed to be “mild, yet flavorful.” I got this information off the manufacturer’s product page which is always impossible to find in the search engines so I thought I would share it here. Anyhow, it’s an interesting blend of Mexican tobaccos with a Connecticut shade wrapper.

Stinky bought this cigar back in August of 2018, and it’s been resting in my personal humidor since September, so I think it’s ready to go. I wanted to smoke it while it was still relatively fresh as many cigars get even more mellow with age. Seeing how this is already a mellow cigar, I don’t want this one to dissolve on me.

The Cafe is a relatively unremarkable cigar with a soft light tan wrapper. The seams are tight and there aren’t any major veins. It’s not the prettiest cigar, but isn’t ugly either. It comes with a nice triple cap and actually feels a little heavy for its size. 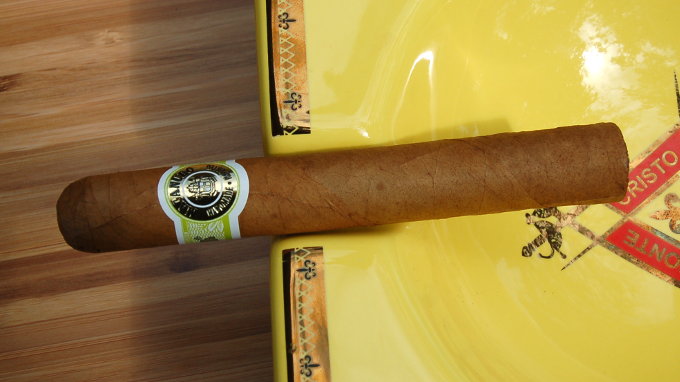 Sniffing the wrapper yields aromas of hay, grass, and light barnyard. It has a light fermented smell to it. Sniffing the foot is less intense, with mostly a hay aroma. 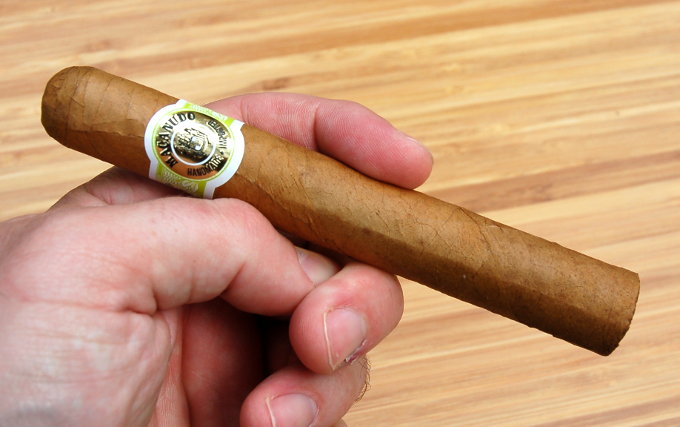 I clip the cap and take a test draw. The draw feels snug. I get notes of hay and caramel. I start toasting and light up. Start time is 2:00 P.M.

The draw is snug, but I’m getting smoke. Feels like a plug towards the cap. I massage it gently and that seems to improve things.

The initial flavors are light cream, butter, nuts, and a child size portion of black pepper on the finish. This is supposed to be a mild smoke, so it’s consistent with my expectations. Let’s allow it to get up to temp, and then I’ll report back with an update. 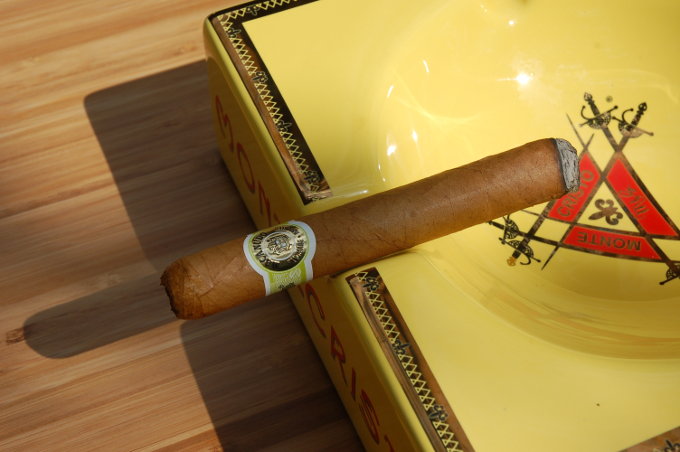 It’s kind of a weird day in S.W. Florida. It’s President’s day, so the courts are closed and there is some expectation that people won’t be working. I decided to at least take half the day off. When I woke up this morning all the windows were fogged up. I stepped outside and it was warm and humid, even by Florida standards. Seemed kind of nasty, and that put the kibosh on my original plan to start the day with a cigar. 6 hours later and the sun is out and has burned off a lot of the humidity. Actually it’s very nice now. Gentle breeze, blue skies, and fluffy white clouds. Can’t complain too loudly.

Back to our Cafe. It’s smoking. Flavors are cream, butter, unsalted cashews, and now we are getting a little weak coffee. Through the nose I’m getting something slightly vegetal. It’s a combination of fermented hay and grass. That fermented flavor I smelled on the wrapper has found its way into the retrohale. Not my favorite flavor, but at least something is going on. 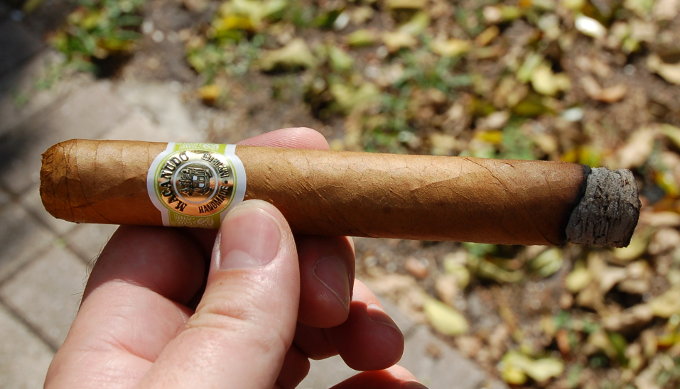 So far it’s a pleasant cigar. Nothing that will knock anyone’s socks off but it’s light, smooth, and smokeable. Smokability. That’s something I look for. This is like the Bud Light of cigars. Body is mild. No strength noted at the 10 minute mark. The cigar has produced 3/4″ of compact gray ash, and is burning evenly.

It’s 2:15 and almost dead quiet. I hear some cars off in the distance. They sound more like rolling waves than anything. There is also a faint rustle of leaves. It is almost spooky quiet. Overhead clouds drift by lazily. A single leaf falls to the ground, landing with an audible thud. This Macanudo strikes me as a good compliment to a quiet day. It too, is almost silent. 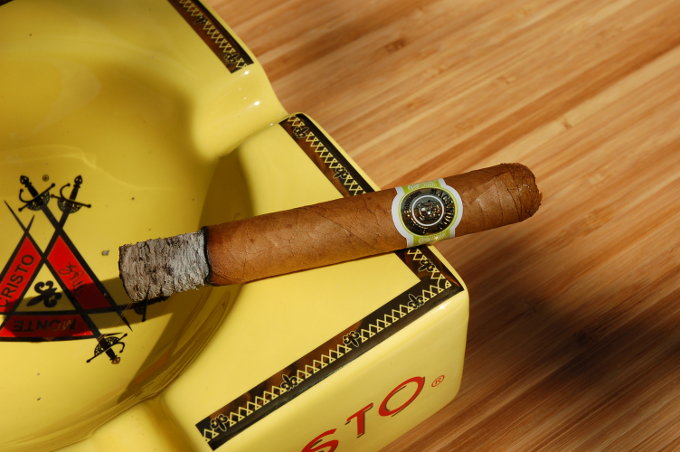 Maybe “silent” isn’t a fair critique of the Cafe, but the cigar is quiet. No updates at this point. Continues to burn nicely at least.

A single prop airplane buzzes overhead. For a moment I consider burning all my plastic lawn chairs to signal it for help. Save me.

The coffee notes have stepped up slightly. They are entering the retrohale and are borderline fruity. Like a ripe coffee bean.

Smoke time is 30 minutes. The ash is still hanging tough. I snap a picture before it invariably torpedoes my crotch. 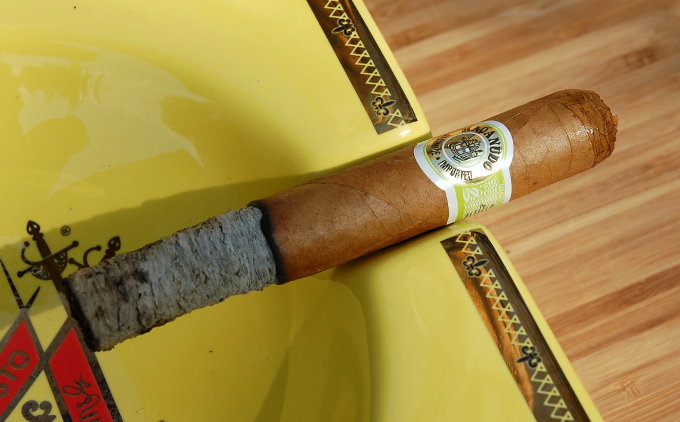 Here are the flavors at present: a little cream, cashews, general nuttiness, coffee with cream. There is also a light spiciness to the cigar. Some sort of baking spice. It teases at my palate. Body remains mild. I sit back and ponder the meaning of life.

The long ash almost adds a level of absurdity to this cigar. Is this real life? What the heck is going on here?

I’m not being fair to this cigar. We all knew it would be mild. It made sense when I picked the cigar out of my humidor. I am now living the consequences of my decision. I also have some Padron 1926s, Anejos, and T52s simmering in my humidor. This begs the question, what the fuck was I thinking? 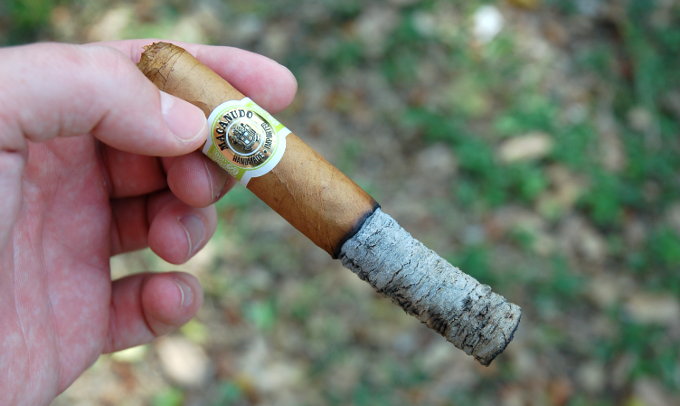 Actually a little something is happening in the flavor department. The retrohale is shifting to a light citrus note. It kind of has a lime taste to it. It’s almost like smoking a Corona light with lime. That’s probably not a bad analogy at this point. This is the light beer of cigars after all. Even the aroma has taken on a citrusey sharpness. Interesting.

The preternaturally long ash continues to grow. We are almost at the halfway point. This is nuts. I’m smoking it normally. Each puff is like a high stakes game of Jenga. I’m waiting for it to all tumble down.

The flavors have shifted. The creaminess is gone. Most of that buttery cashew is gone. It’s more of a coffee and citrus cigar now with a little nuttiness, and a little black pepper on the retrohale. It’s mellow, but not necessarily smooth. I’m getting some sharp acidity both on my tongue and through the retrohale. 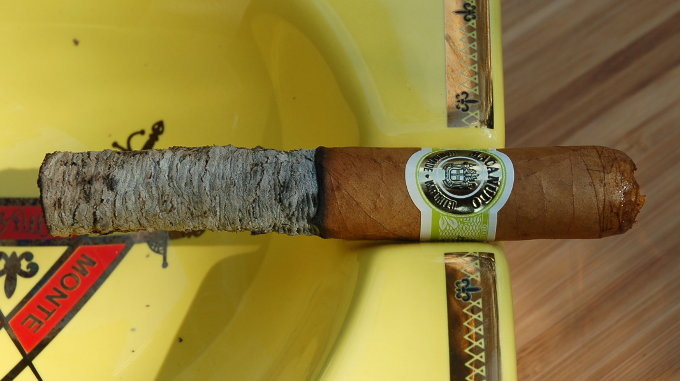 I wonder if knocking off the ash would improve the flavors? I can’t knock the ash. This has to be some sort of record for me. Say what you will about the flavor profile, but the construction of this cigar is something else.

Smoke time is about an hour. The ash still hasn’t dropped. 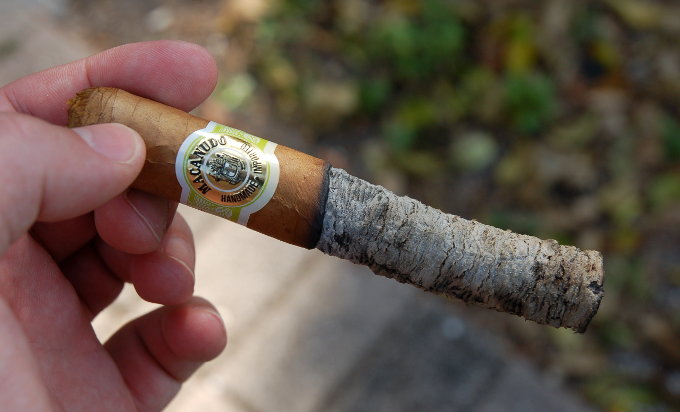 The flavors continue to be kind of rank. Bitter, sour, and decidedly not pleasant. I don’t think I’ve ever smoked a cigar that was both sour and bitter at the same time before, but there is a first time for everything. If this was not a review I would have pitched it by now.

Instead, I marvel the freakishly long ash. That is the Cafe’s singular saving grace. Damn the flavors, we are participating in a full on freak show now.

Also, this cigar is smoking hot. It’s a quarter inch away from the band, but the band is already singeing. Do I pull the band? Who the hell knows. I should probably call Guinness before I do anything further. Somebody take a picture of this thing.

The cigar is now tasting something like stomach bile. I hope it doesn’t corrode my teeth. 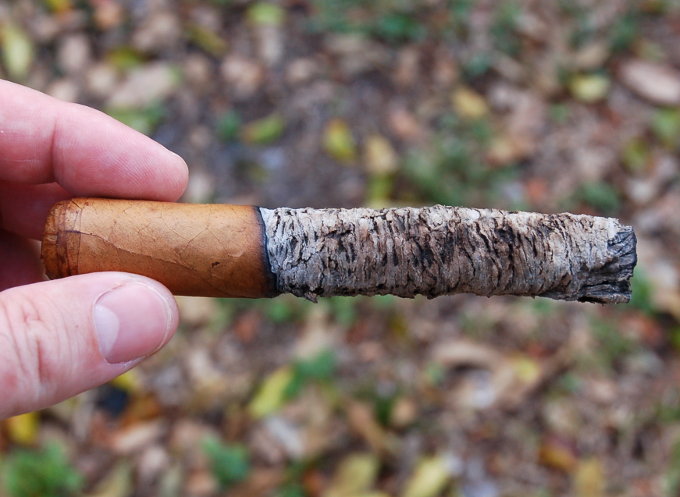 Time to pull the band. I’m going to take one more picture and then do this over the ash tray. Can’t risk the ash landing on my junk at this point unless I’m OK with adopting.

The band has come off without a hitch. Gentlemen, we have landed on the moon. Here is an overexposed band shot: 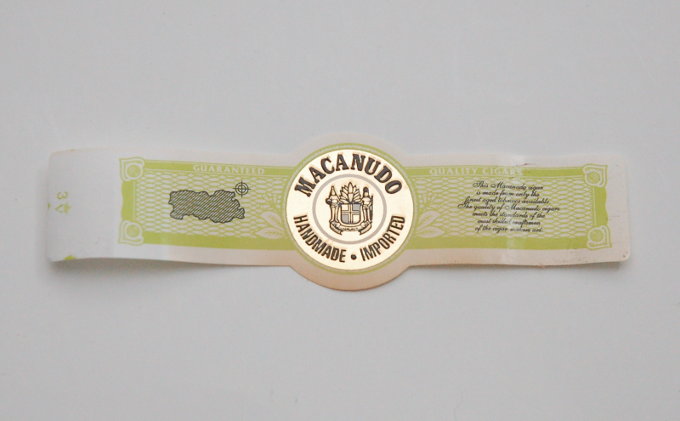 The ash is cracking and leaning in several directions. The flavors are burnt coffee, paper, and nuts. No more citrus at this point. The finish is unpleasant and it lingers in my mouth.

The ash finally falls at the 1 hour 25 minute mark. I tried to set it down in my ash tray and it fell apart. My first thought was, “Great, now I can throw this fucking cigar out.” Man, this cigar has me feeling froggy. 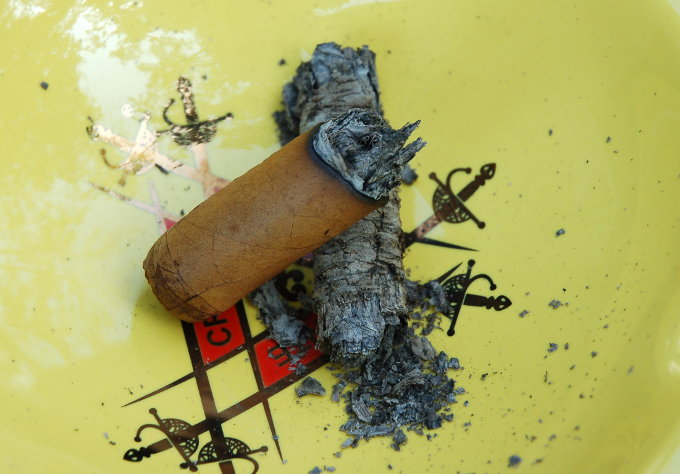 I take a couple more puffs. They aren’t as bad as before, but still not pleasant. The cigar then goes out on its own. I decide not to relight it.

This is why I don’t like reviewing singles. What a bizarre experience. I will post this for posterity, but who knows, maybe I got a bad stick. A stick that was still offgassing and could have used much more humidor time. Still, 6 months of rest, including 4 months in my own humidor, should make most cigars good to go. And since this is a mild cigar I didn’t want it to sit for a year.

Or maybe I was smoking too fast. The draw was snug after all. That said, I was on pace for an hour and a half plus robusto. I think my smoking cadence was OK.

I’d say take this review with a big pinch of salt. I haven’t read any other reviews. I try not to do that so I can form my own unbiased opinions. But I’m sure plenty of people have had good experiences with this cigar. It did launch a company, after all.

I’m a sample size of one, and only smoked this one cigar for review. Hopefully it was at least entertaining. I’d say at best this is a mild cigar for novice smokers. At worst, this a poison pill wrapped in tobacco.

Now if you will excuse me, I’m going to go brush my teeth.

I recommend purchasing the Macanudo Cafe at Famous Smoke Shop. Please consider that purchasing things through any of the links on this website, including Amazon.com, helps support the website and keeps it going. Any and all support is greatly appreciated. Thank you very much.