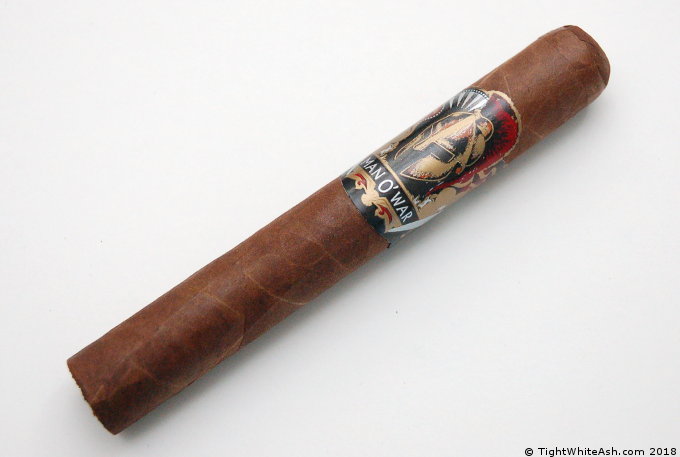 If you are a bargain oriented cigar smoker like me, and if you spend any amount of time on the internet researching cigars, then it shouldn’t take you long to find Man O’ War. This is a brand of cigars developed by A.J. Fernandez. A.J. is known for his talents as a blender and manufacturer of cigars, but what I found especially interesting is how the old Puff.com collection of cigar reviews ranked his Man O’ War Ruination as their #1 cigar as ranked by their readers. 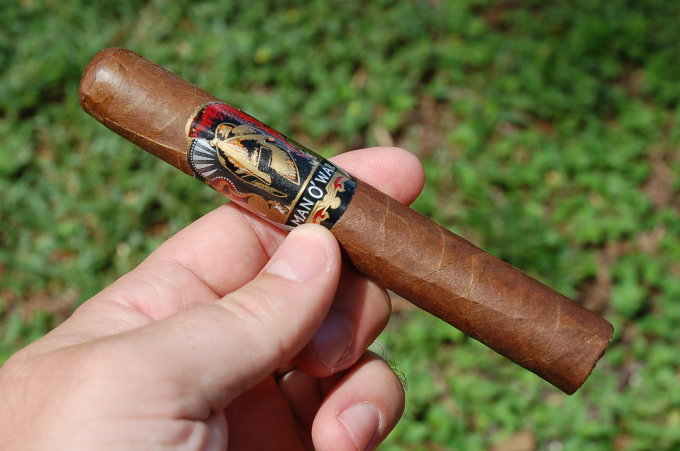 Unfortunately, it looks like Puff has dismantled or otherwise broken the old reviews section of their website, but you can still sort of see it here in their archives (towards the bottom on the right). The Man O’ War Ruination ranks at the very top, above a Cuban Cohiba, Opus X, and the Padron Anniversary series blends. That’s impressive! Especially since these cigars regularly retail for around $5 a stick, and occasionally go on sale at deep discount. Try getting a Padron Anny or Opus X for $5 or less… not happening. 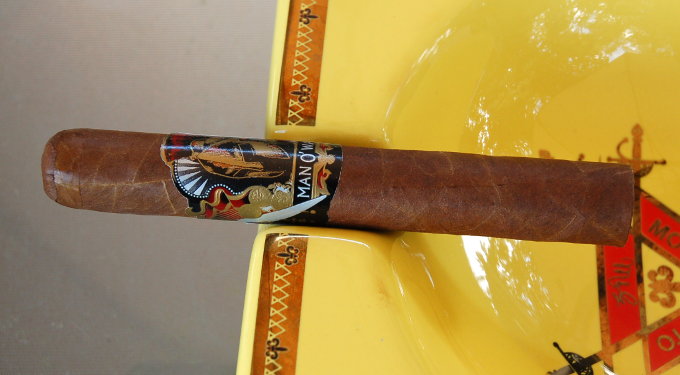 In an epic buying spree at CigarBid in January I picked up a couple Man O’ War samplers four around $2 a cigar. They have been marinating in my humidor for 9 months now. I’ve been smoking on them, but haven’t gotten around to reviewing them. Time to get that done while the sticks are still somewhat fresh. I want to start with the regular Man O’ War, but I will be reviewing the Ruination and a Connecticut Shade Man O’ War blend as well soon.

I also want to mention AJ doesn’t list these cigars on his website, and there is no website for Man O’ War cigars. Would have been nice to include a little background from the manufacturer.

The Man O’ War comes in a golden brown wrapper. There are plenty of golden brown visible veins, but the seams are tight and even. There is a little tooth and a dull sheen to the cigar. The pack feels even and firm. It feels about right for it’s size. Perhaps slightly on the light side. Topping things off is an attractive double cap. 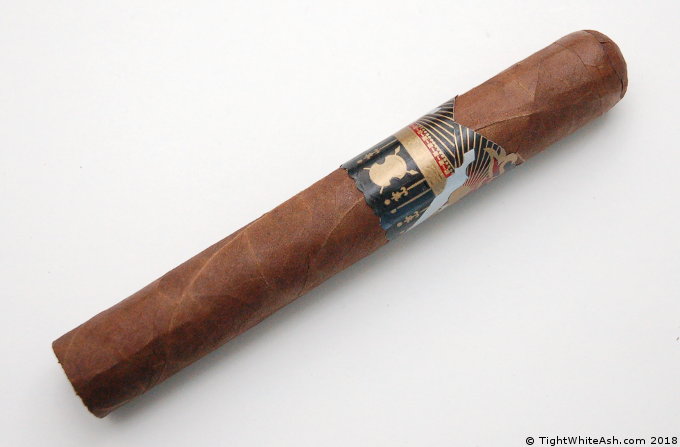 Sniffing the wrapper yields plenty of earth, hay, and peppery aromas. The foot puts off a heavier barnyard aroma with some earth and cedar. Nothing out of the ordinary for a Nicaraguan cigar.

I clip the cap and take a test draw. It’s a good draw. I get cedar, raisin, and sweet tobacco on the cold draw. I get to toasting and light up the cigar.

The first couple puffs yield strong black and red pepper, cream, wood, nuts, and sweetness. Medium full bodied right out of the gate. The finish is quite peppery and it lingers on my tongue and back of the throat. Not a bad start.

5 minutes in and the cigar is producing huge clouds of smoke with each puff. I’m now getting a strong cedar flavor. It’s sharp and present on the tongue and retrohale. It’s counterpoint is a sweet bready flavor. It’s not as strong as the cedar, but you can taste it in the background. 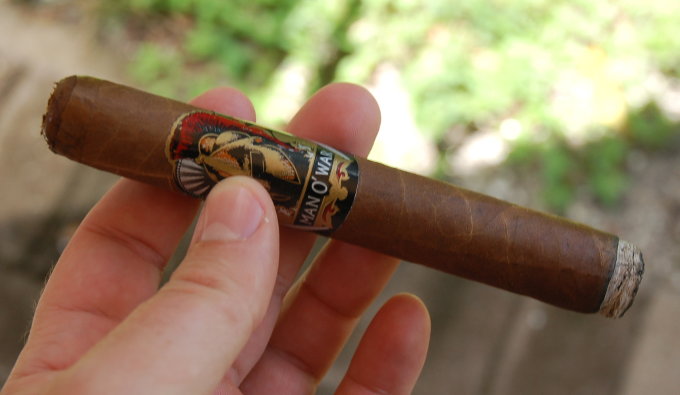 10 minutes in, and the cigar has built in complexity. It is now displaying nutty and toasty overtones. I’m also getting some maltiness. Light cream on the draw, pepper throughout, with earth, wood, nuts, toast, sweet tobacco and some raisin. The finish is mostly plain tobacco and lingering pepper. The retrohale is mostly woody flavors.

Coffee and dark chocolate come in to play as a deep, slightly bitter element. The cigar is throwing all the classic Nicaraguan flavors at you in a spicy, medium full bodied package. It’s balanced and satisfying. For $2 this cigar is unbelievably good.

The burn characteristics so far have been great. The burn line is slightly wavy, but no where near needing a correction. After 15 minutes we have half an inch or so of compact light gray ash. Smoke production is excellent. No complaints so far with the burn quality of this cigar.

Now I’m getting some anise notes. I am hesitant to throw out buzz words like “flavor bomb”, but this cigar is throwing off all sorts of flavors, and I’ve already experienced multiple transitions within the first 15 minutes. Case in point, the pepper has dialed back substantially. At its peak it was maybe an 8 out of 10. Now it’s sitting at a 5.

It’s a nice day here in Southwest Florida. Still hot as hell, but there is plenty of sunshine, deep blue sky, and white fluffy clouds overhead. Dogs bark in the neighborhood, and I hear the low whine of a distant weed whacker. I started this review a little earlier in the day as there have been torrential rain storms in the late afternoon all week. This is the start of a much needed long weekend. It’s crazy how fast the days go by. 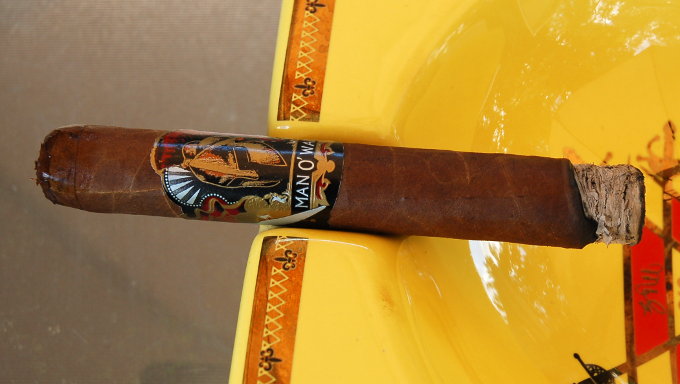 Cedar is back along with some graham cracker and raisin. Deep dark chocolate is not far behind. Cinnamon and candied ginger comes out of the woodwork. Holy smokes.

The burn was a little wavy but it self corrected. Nice.

Coffee is now back. A solid inch of pale gray ash clings to the cigar. Smoke drifts lazily from the foot, swirling off in a gentle breeze. A moment later and the ash drops while the cigar is resting in the ash tray.

The coffee is building. Black and bold, with toast and roasted nuts in the periphery. The pepper has dialed back even further. The aroma is sweet chocolate.

I was concerned I may have allowed this cigar to sit too long in my humidor. There is a lot of pomp and circumstance around aging cigars. Some blends take to aging well, but other cigars mellow away into nothingness. There are no absolutes. AJ is known for his bold blends, and I noticed my New Worlds mellowing out after 8 months on them. They were still good, but it wasn’t the kick in the pants you get with 1 month of rest. The flavors definitely rounded. 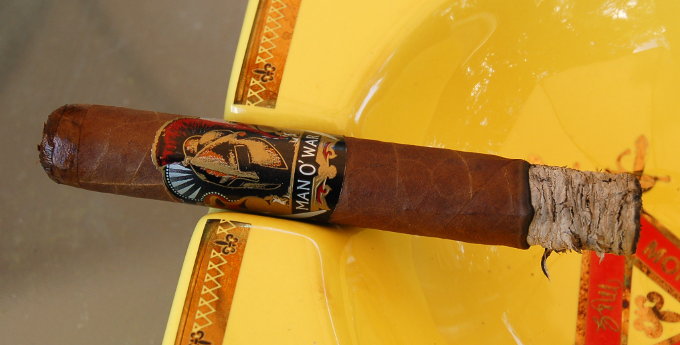 9 months shouldn’t be long enough to blanch out a cigar, but I’m relieved to write that the Man O’ War tastes great with 9 months on it. It’s a superb cigar so far with plenty of complexity and loaded with transitions.

Smoke time is around 40 minutes.

I’m getting some light cinnamon and baking spices. Plenty of sweet tobacco, dark chocolate, and creamy coffee right now as well. Cedar on the retrohale and a sweet aroma perfumes the air.

I take a long slow pull on the cigar. Bright coffee explodes on my tongue. Cedar backs it, lending to the tangy flavor. Not quite reaching citrus levels, but getting up there.

A single strand of spider’s silk curves off the oak tree, attached somewhere in the tangle of ferns below. It ebbs in the breeze and shimmers in the afternoon sun. All the rain has made the yard extremely green and leafy. The leaves rustle soothingly in the background. This is the kind of stuff you just don’t appreciate, and is part of why I like smoking cigars so much. It forces you to be present and to appreciate what you have. 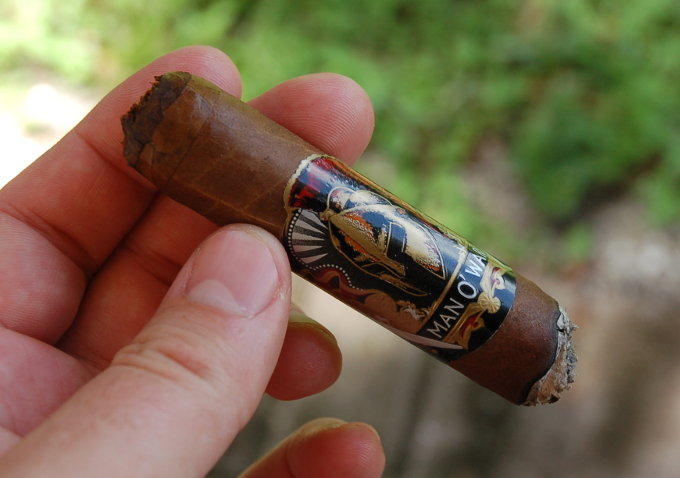 Coffee is the dominant flavor now. I’m getting a little earth and sweet raisin on the background. Hardly any pepper. I don’t love a super peppery cigar, but I don’t mind a little spice. The cigar is very smooth and easy to retrohale. Not a lick of harshness. I will say the complexity has pulled back and the body is in solid medium territory now.

I just realize that I have forgotten to take any pictures. That’s how much I have been enjoying the cigar. Oops.

Strength has crept up a little. I’m comfortably numb, but could have done with a bigger breakfast. 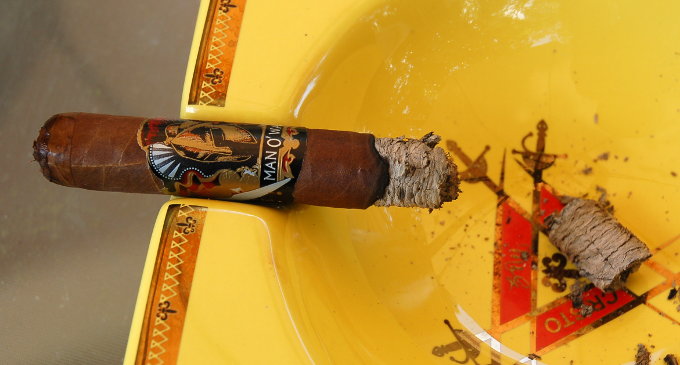 The cream from the first third has faded. The flavors include bold black coffee, dark chocolate, light raisin, and earth. The burn continues to be even. Still getting plenty of smoke.

I’ve noticed a new slightly musky flavor. Kind of like an aged tobacco. It’s a nuanced but interesting development in the cigar. Cedar is coming back along with a little orange zest. The cedar grows in intensity over a few puffs.

Smoke time is at 1 hour 5 minutes.

We are right at the band at the leading edge of the burn. The burn has gone a little wavy, and I may need to offer the first touch of flame since lighting the cigar.

The band pulls off easily. No issues there. The band art isn’t the most meticulously rendered, but who the hell cares. This cigar is great and priced appropriately. Even the wavy burn takes care of itself. 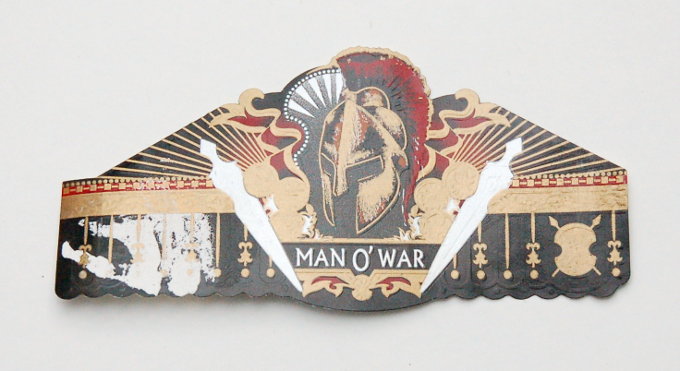 This is still a very coffee and cedar heavy cigar. The wild transitions in the first third have slowed down. But now tanginess is building up. I’m almost getting an Earl Grey flavor now amidst all the coffee and cedar. The finish is a lingering plain tobacco.

I get up to take a picture and feel light headed. Strength is there. That’s for sure.

I’m getting a little mint now. It is part of a sharper flavor profile, but not harsh. The flavors are continuing to mature. It’s growing more bitter, but not in an unpleasant way. I’d call it more an absence of sweetness. It’s part of the strong coffee profile.

A large monarch butterfly floats around in the back yard. Circling and swooping in the breeze. 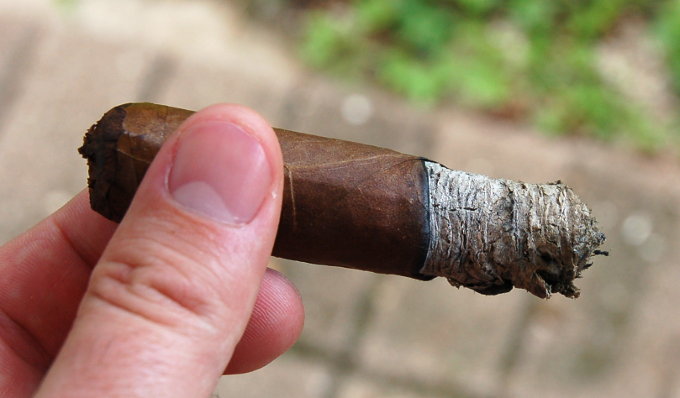 Black, borderline espresso coffee, light cedar, baker’s chocolate, orange peel, bergamot, and wintergreen. Those are the flavors I am experiencing. The retrohale is smooth and mostly cedar and plain tobacco. The aroma is of fresh baked bread and chocolate. The finish is coffee and it lingers.

We are an hour and 25 minutes in on this robusto. Plenty of cigar for your money. It’s getting close to 2 P.M. my stomach is growling.

So far the burn has done a good job self correcting, but at this point a half inch peninsula of wrapper is forming. This is the biggest deviation so far, but once again it does seem to be correcting itself. I finally decide to help it out at the hour and 35 minute mark.

I’m getting a charred oak flavor now. Another trick up the sleeve of this Man O’ War. 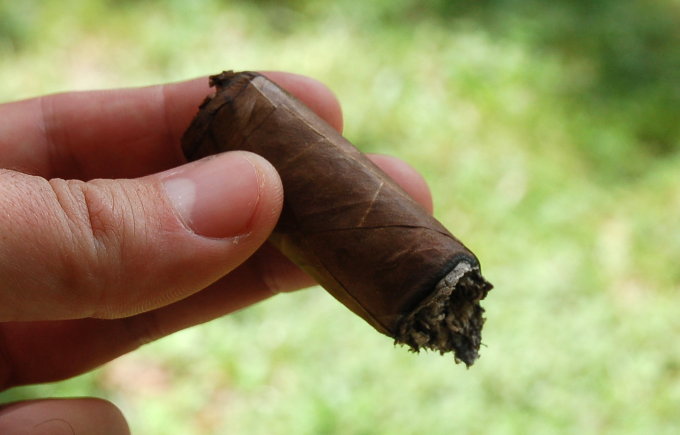 As we pass the 1 hour 30 minute mark I’m still getting plenty of rich coffee, baker’s chocolate, and toasty notes, but I’m ready to put this one down. You can easily get another 15-20 minutes, as I still have an inch and a half of cigar left. But for purposes of the review I’m done here. Bravo.

What an excellent cigar. It’s no wonder this stick is consistently rated high by purchasers on cigar websites. It has that core of Nicaraguan flavors, but AJ blends with a deft hand. The cigar takes so many twists and turns it’s unbelievable. The result is a cigar with plenty of beautiful flavors and transitions coupled with top notch construction. All at a price almost any cigar smoker can afford.

When you consider the price tag this cigar becomes a no brainer. A great choice for anyone wanting a hearty medium to medium full bodied smoke and another home run for AJ Fernandez. Highly recommended.

I recommend purchasing the Man O’ War at Famous Smoke Shop. Please consider that purchasing things through any of the links on this website, including Amazon.com, helps support the website and keeps it going. Any and all support is greatly appreciated. Thank you very much.