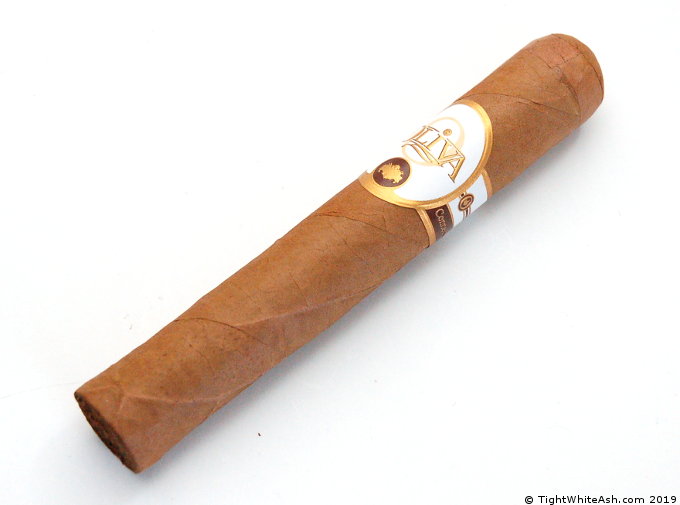 Continuing on with our theme of reviewing all the entry level Oliva sticks, today I’m checking out the Oliva Connecticut Reserve.

I realize that brothers of the leaf further on in their cigar smoking journey tend to shy away from both Connecticut Shade wrapped cigars and entry level cigars, but I’d still like to review this stick. If anything it will help form a good base line of reviews. Plus Oliva’s Connecticut Reserve is a popular cigar, and is featured in Oliva’s sampler pack. So my guess is some people will want a review on this cigar. Happy to oblige. 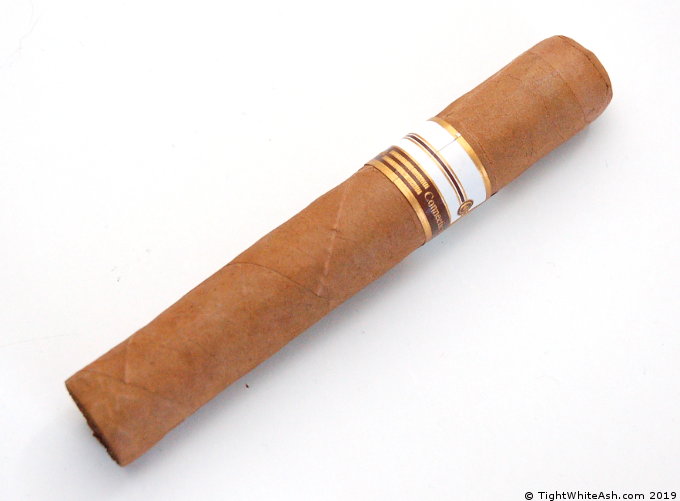 Oddly enough this is the first time I have ever smoked this blend, so I’m going in “blind”. Not something I typically like to do, but I received this cigar in an Oliva sampler, and paid something like $3 a stick. If my experience is totally whack I’ll can the review, but I’m expecting this cigar to smoke well like pretty much every Oliva I’ve ever had. These may be high production volume cigars, but Oliva is a lot like Padron in that the cigars tend to be consistently good throughout their entire lineup.

Whether this blend in particular will be to everyone’s taste is an entirely different matter. So lets dive in and find out what the Connecticut Reserve is all about. 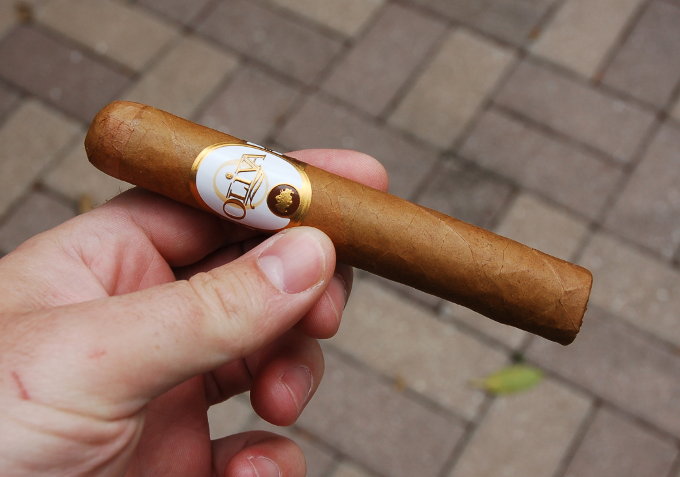 I gently pull the cigar from its cellophane wrapper. Construction is nice. The seams are even and mostly invisible. The wrapper is smooth, with little tooth and not much visible oil. The fawn colored wrapper is attractive. There are some veins, but this looks like carefully handled and well preserved tobacco. The cigar feels of about average density for its size. Looking at the foot of the cigar reveals what appears to be more light tan tobacco. I don’t think this will be a wolf in sheep’s clothing like the Man O’ War Virtue. Topping things off is a neatly applied double cap.

Sniffing the wrapper gives me light hay and light barnyard aromas. From the foot I get more hay, earth, and barnyard. Nothing crazy with the pre-light aromas. 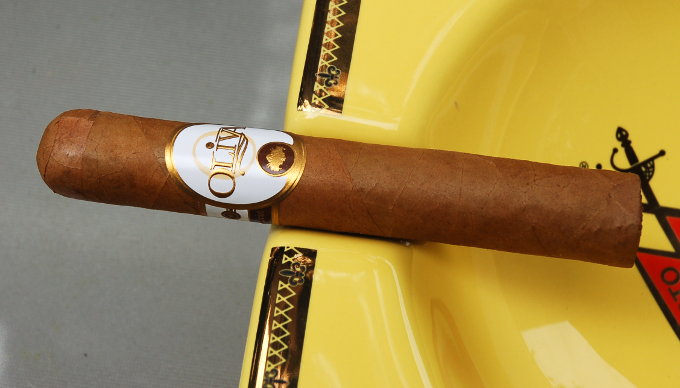 I clip the cap with my Xikar cutters and take a test draw. The drag is a little snug. I get mostly wood on the pre-light draw. I start toasting and light up. Start time is 11:45 A.M.

The first hot draws are mostly wood and nuts. Not a ton of flavor, which doesn’t come as a huge surprise. I give it a few minutes for the flavors to open up and develop.

5 minutes or so in and I’m getting a little creaminess, hints of something sweet, generic wood, lightly toasted nuts, and a little pepper on the finish. On the retrohale I’m getting some more black pepper and a little cedar. The body is mild. That isn’t to say it’s a bad cigar. To the contrary I’m finding it to be a pleasant and enjoyable smoke. 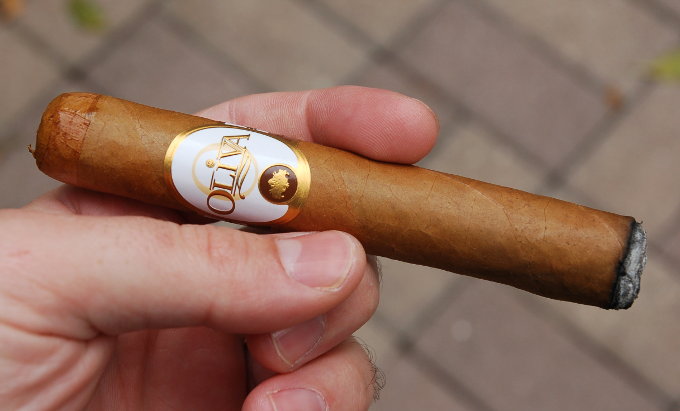 The draw is a little snug, but the cigar is producing plenty of smoke without a lot of effort. The burn line so far is almost razor sharp.

It’s a windy day in Southwest Florida. Apparently we had a storm last light. I slept right through it. After finishing The Left Hand of Darkness I fell asleep around 10:30. I woke up to the sound of my alarm at 8 AM, which I promptly killed, and then slept until 9:30. I guess I needed the rest. At any rate, it’s windy today and I’m snugged up real close to a corner of the house to stay out of the wind. 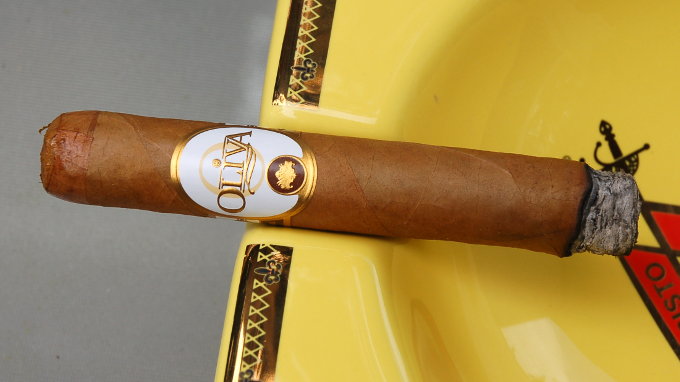 10 minutes in and our Oliva Connecticut Reserve is smoking just fine. Flavors haven’t changed much beyond the pepper picking up slightly. The cigar has produced about an inch of light gray ash. The flavors are OK. I would have liked a little more cream, and I’m not getting a whole lot of that here. Mostly wood and pepper at this point. I will soldier on.

I should caveat this review by saying that this cigar has been resting a year. That could cause significant changes from a cigar “Right Off The Truck” (ROTT) or even from a cigar that has rested a month or so. I always list how long I have allowed the cigar to rest at the top of each review. It is one of many variables in smoking cigars. 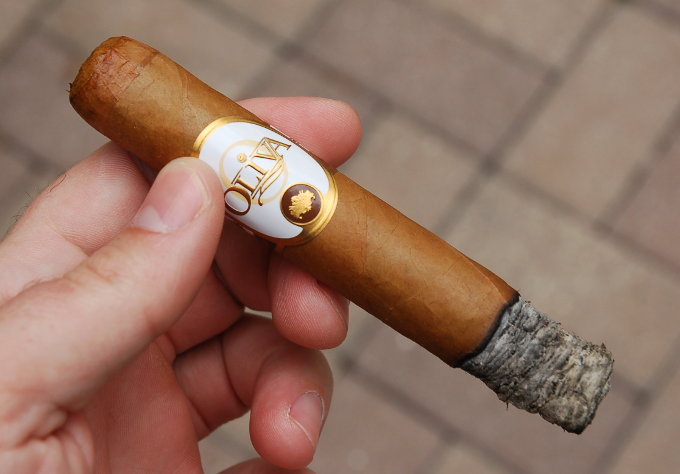 At around the 20 minute mark the flavors have stayed the same. Some light cream, then nuts and wood, ending with pepper. The finish is pepper, wood, and a little natural tobacco. Not much sweetness in this cigar so far as we finish up the first third.

Smoke time is a little after 20 minutes. The cigar is burning a little fast, on pace for a 1 hour robusto. I tend to smoke slow, sometimes getting an hour and a half out of my robustos, so that’s on the fast side for me. 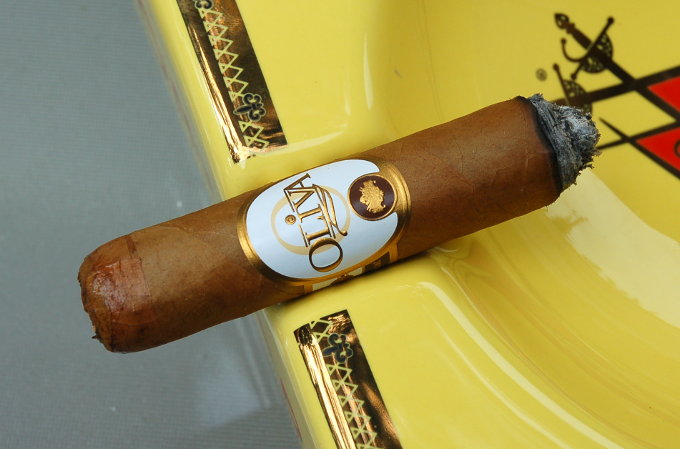 The ash fell on its own into the ash tray. I’m using a portable ash tray that sits in my chairs cupholder to keep the cigar out of the wind. The yellow ash tray in the pictures is mostly for the photos today.

At any rate, dropping the ash appears to have opened the cigar up a bit. Creaminess is up a bit, and I’m getting a little sweetness with the nuts. This is a good development. 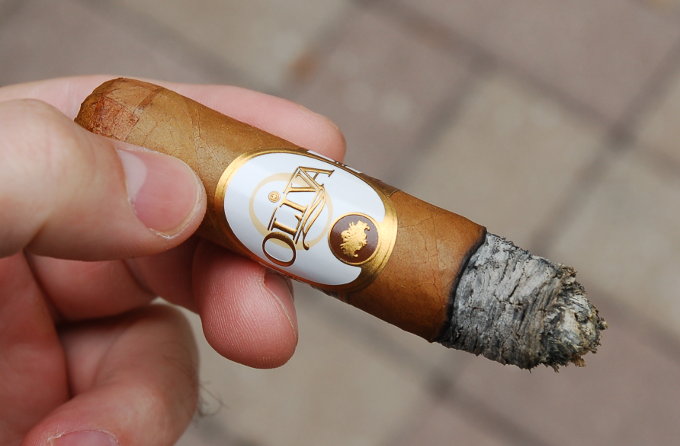 Tomorrow is MLK day. Last year I recall taking the day off and smoking the Cohiba Black. This year I gotta report to the office despite the courts being closed. I’ve got a big mediation this week, and a trial in the first week of February. The case I’m trying is a bit of a black box for reasons I can’t get into. Its possible some or all of the issues will settle, and I believe my client has the advantage going in to court, but you can’t bank on that. The heat is on.

The Connecticut Reserve has been improving. Flavors are increasing in intensity. Not to the point where it’s medium bodied, but still, increasing relative to the start of the cigar. The nuttiness has amped up, and I’m getting a little coffee now. We are right around the halfway mark. 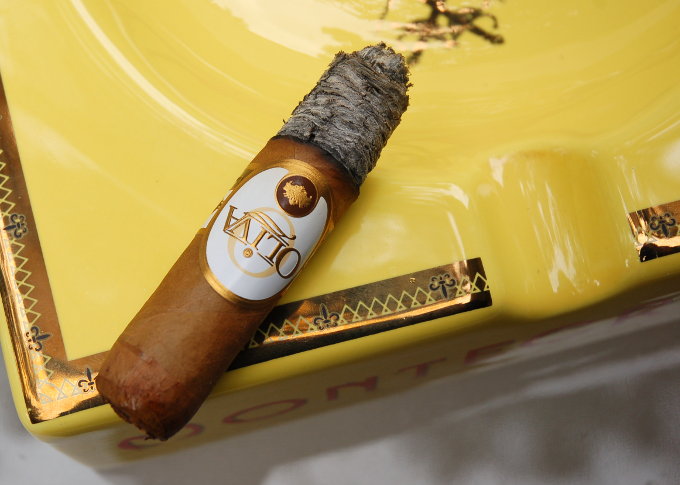 We are almost at the band, and we are nearing the final third.

Smoke time is a little over 35 minutes. We are at the band. It pulls off with zero effort. The ash also drops effortlessly into the ash tray. Here is your band shot:

The flavors have finally transitioned on this cigar. A splash of cream, rich coffee, light nuts, and a good size portion of black pepper. The coffee flavor is stealing the show with nuts and pepper on the finish. The finish is spicy and it lingers on the tongue.

Since there isn’t a whole lot going on with this cigar, I’d like to talk about my approach to rating cigars. I think for a cigar to earn top honors (which in my case is a 4.5 or higher out of 5) the cigar needs to have great flavors, complexity to the flavors, strong transitions, and it needs to smoke well with minimal burn corrections or issues. The end result is a true cigar smoking experience. 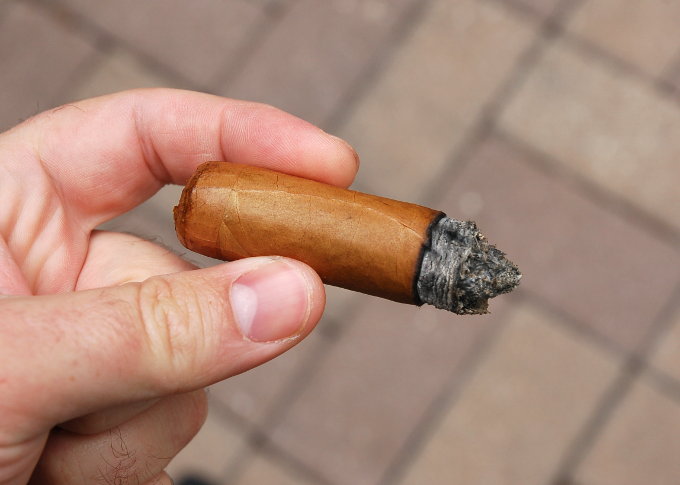 I’d say the base line for a good cigar is right around a 4.0. That’s probably a “90” on the Cigar Aficionado scale that many other reviewers use. Anything above 3.7 is respectable, and anything above 4.2 is going to be a very good cigar. 4.5+ is reserved for near magical cigars. A score of 3.5 is going to be a below average stick. Like an 85.

Our Connecticut Reserve is still smoking. The flavors have darkened considerably. Black coffee, light leather, earth with a touch of pepper on the finish. No sweetness at all. It’s a little unexpected frankly, although it’s not uncommon for some cigars to darken as you smoke them down. The oils and water in the leaves condense and collect, and some cigars are blended intentionally to have a little kick towards the end.

Some cigars grow hot and squishy towards the end, which hasn’t happened here yet. Construction has been excellent. The ash continues to fall off in progressively smaller chunks. 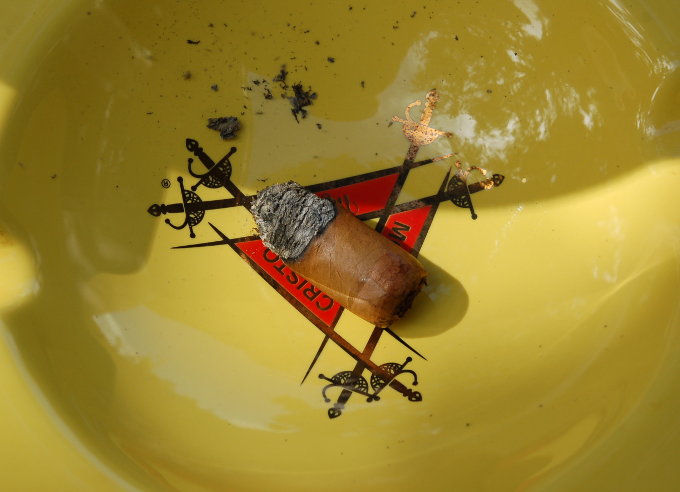 The flavors are growing progressively more bitter. I’m not enjoying it that much at this point. We are at the 55 minute mark with under an inch to go.

At the 1 hour mark the smoke is growing warm. We have half an inch or so of the cigar left. I will end the review here.

The Connecticut Reserve was a little different from what I was expecting.

First, I was expecting a creamier cigar. There was some cream here, but not a lot. Next, the flavors were simple and merely “OK” in my book. Little sweetness or cream, two elements that I would have enjoyed more of with this cigar. Body started out as mild, and it ended at the mild side of medium. Finally, There were some transitions, but mostly it was stripping away any sweetness or cream. I like coffee, but wanted more balance in the 2nd half of the cigar. Construction was excellent. Zero complaints there.

At the end of the day I was left wanting more from this cigar. I had low expectations for the flavor profile, and even those weren’t really met. Granted, I only had a sample size of one here. So take this review with a grain of salt. Since the cigar performed well I think I have given the blend a fair shake, but I could have gotten an off stick. I do have another one of these in one of my humidors. I’ll smoke it at some point and when I do I’ll update the review.

I prefer other cigars in Oliva’s lineup and don’t see myself actively seeking out this blend again. That said, this one smoked fast, and I’ve got another one in my humidor. When I smoke it I’ll update the review. In the meantime, this could be a good option for fans of mild cigars or Connecticut wrapped blends.

I recommend purchasing the Oliva Connecticut Reserve at Famous Smoke Shop. Please consider that purchasing things through any of the links on this website, including Amazon.com, helps support the website and keeps it going. Any and all support is greatly appreciated. Thank you very much.