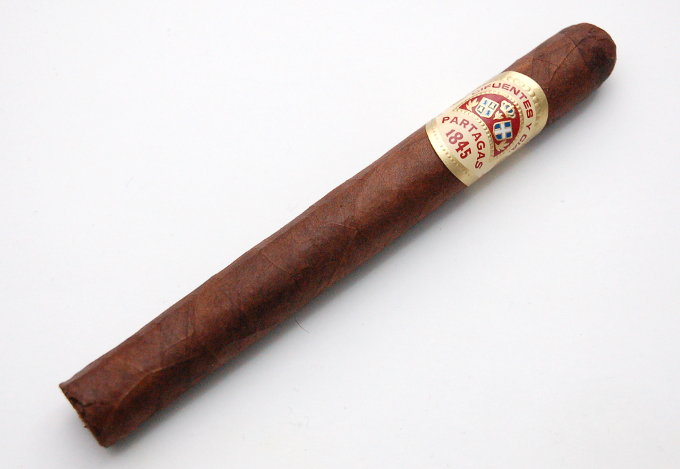 This was another close out special from Holt’s. They were pushing them hard, and now they are all sold out. I picked up a 6 pack for $2.50 a piece. Tough to lose at that price. I don’t think Partagas makes them any more. Can’t find any information on their website. But you can still find these if you look around in the $4-5 range.

I purchased the “Sabroso” vitola in 5.8″ x 44. It’s a slender densely packed cigar that comes in an aluminum tube. I ditched the tubes for storage in my humidor. Word has it that storing cigars in aluminum tubes invites mold, plus it takes up extra space.

The Spanish Rosado is a slim cigar with a rusty brown Honduran wrapper. The wrapper color varies cigar to cigar. The seams are tight and the veins are small. However, There appears to be a couple significant veins underneath the wrapper running the length of this particular cigar. Here’s a picture showing this: 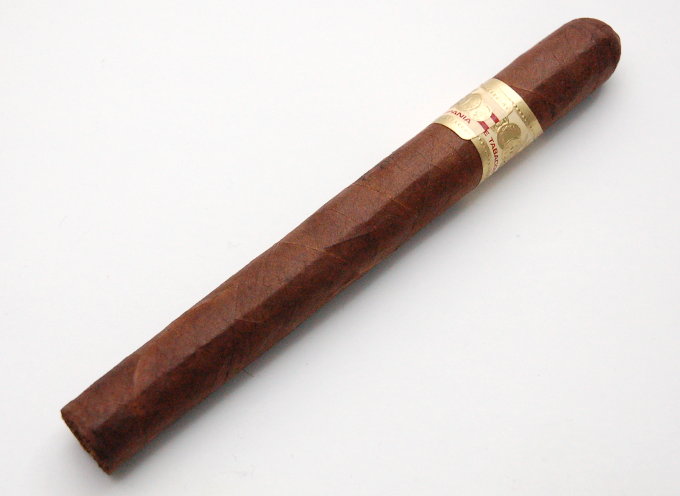 I didn’t notice this with my other cigars. The Spanish Rosado is topped off with a triple cap. There is a slight amount of tooth and the wrapper has an oily sheen to it.

From the wrapper I smell sweet cedar, cinnamon, baking spices, leather. Same flavors from the foot, but stronger.

I clip the cap and take a pre-light draw. It’s free and easy. The cigar itself feels tightly packed.

I start toasting and light up the Partagas Spanish Rosado. Start time is 4:35 PM.

Upon first light I get a firey blast of red and black pepper. It coats the mouth and tongue, and singes my nasal cavities. Cream comes in after a few puffs. The pepper is still strong, but it has backed down. A delicate cinnamon flavor comes into the mix. A few puffs later nuttiness joins and now it dominates the retrohale.

Smoke output is plentiful and the burn line is even. The cigar is medium bodied out of the gate. It’s putting off an aroma of cedar, toasted marshmallows and baking spices. 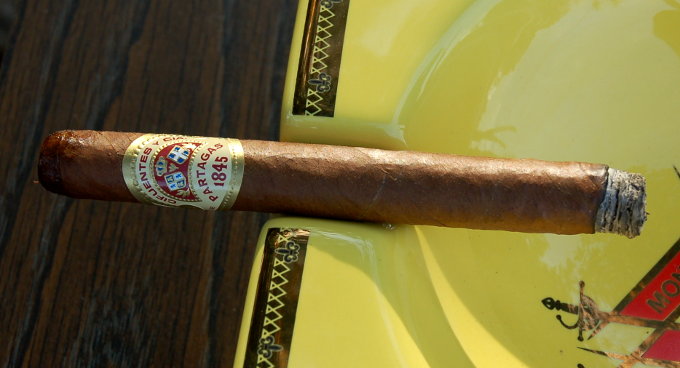 10 minutes in and the flavors keep layering on. Now chocolate and raisin have joined in. After a few more puffs cedar joins the draw and retrohale flavors.

The finish is pepper and sweet tobacco. It fades after 20 seconds or so. The cigar is moving along quickly, and I can see the wrapper burn with each puff. The ash drops off at 3/4″.

I hung out with a buddy from grad school last night. These days I don’t get out often, so this was me reliving the glory days. The bar we went to was cigar friendly, which was pretty cool. I had E.P. Carrillo Seleccion Oscuro. It was excellent. 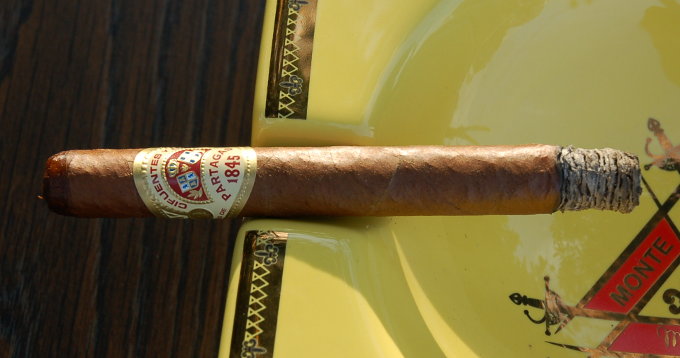 It was a late night, that made for a late start to the morning. All day I’ve been trying to make up for it. Meditating (a new thing for me), coffee, cleaning the house, lunch, working on my websites, washing my car, going to the gym to sweat out the sin. And now I’m here. Trying to squeeze in a cigar review before the day ends. 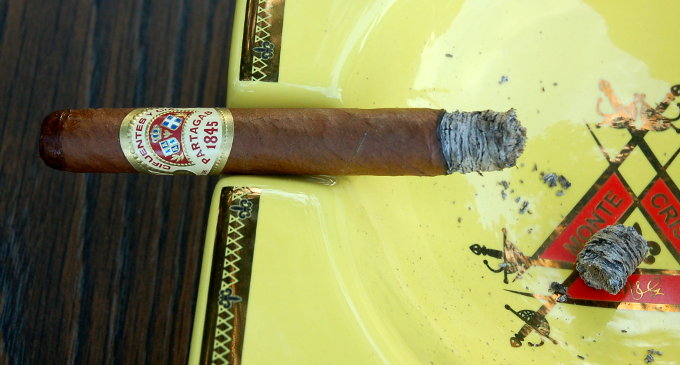 Our Spanish Rosado is chugging a long. Smoking nicely and throwing off plenty of flavors including cedar, cinnamon, pepper, light cream, chocolate, and raisin. Nice flavors. So far this has been a great cigar.

The flavors remain unchanged for now. Each puff starts with cedar and tangy citrus on the front of the palate bolstered by notes of cream. Then cinnamon, pepper, and other indiscriminate spices, with a chocolate and raisin finish. The retrohale is woody.

It’s a beautiful evening here. The days are growing longer. The sun is supposed to set just after 6 PM. About an hour from now. The sky is still a pale blue streaked with clouds. Golden light catches the leaves. It’s breezy, but not too bad. And the temperature is a perfect 76 degrees. 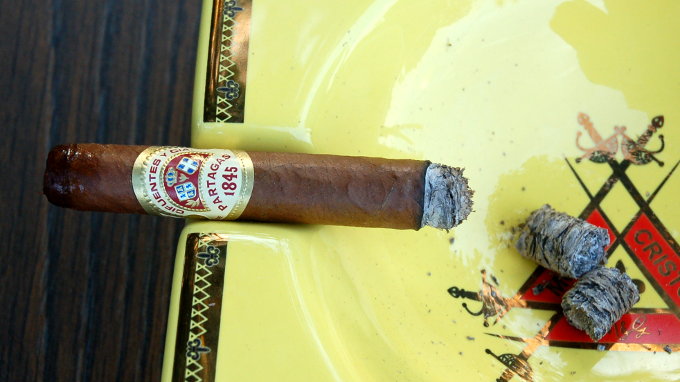 The Spanish Rosado continues to drop ash in neat half inch chunks. It’s smoking perfectly (knock on wood). The spice has ramped up a couple notches. It’s hitting me front and center on the tongue with the cedar.

My girlfriend has come out to tell me she caught the cat licking our frying pan. Good to know.

The Spanish Rosado isn’t doing much differently than it was before. Same distinct flavor profile. A good consistent burn. The the citrus is building, and becoming sharper. Cinnamon tickles the nose on the retrohale. 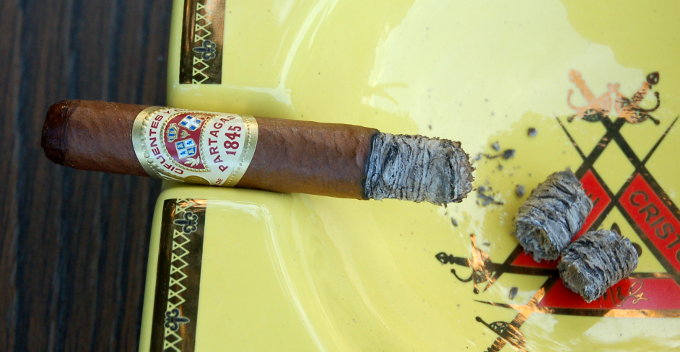 I’m reading Norman Mailer’s The Executioner’s Song. Just started it. So far it’s an interesting book. I know very little about it so it will be a surprise.

As we close out the second third the flavors have shifted. I’m getting nuttiness again along with a coffee element and some sweetness. The new flavors play nicely with the cinnamon, cream, cedar, citrus, raisin, and chocolate. This is a smooth cigar with complex and interesting flavors.

Smoke time is right around an hour.

I experienced a little tunneling in the second third, but it was easy to fix with a small burn correction. Since then it has continued to burn evenly, and is still throwing off lots of smoke. Body has remained at a medium. Strength has been mild.

Cloud cover has been growing. In the distance the sky has darkened. It’s supposed to rain tomorrow, but presently we have blue sky overhead. Smoke ’em if you got ’em. 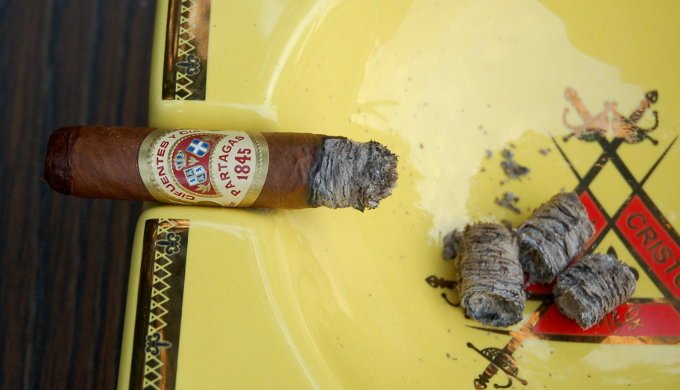 The flavors have continued to darken. Let me list out what I’m experiencing: coffee, cream, cedar, citrus, cinnamon, light leather, chocolate, nuttiness, and still a little raisin at the end with some pepper. No lack of flavors here.

We are quickly approaching the band. It peels away easily. A white egret flaps calmly overhead. Off in the distance an ambulance wails.

We are also losing day light. It’s a few minutes to 6, putting us at the hour and 20 minute mark. The photographs are going to start sucking, but there isn’t much to see. The denuded Spanish Rosado is smooth and oily. The burn line is wavering slightly. If it doesn’t autocorrect soon I’ll help it along with my torch lighter.

Suddenly the wind picks up and the trees sway, scattering leaves across my yard. Gray clouds have blown overhead. 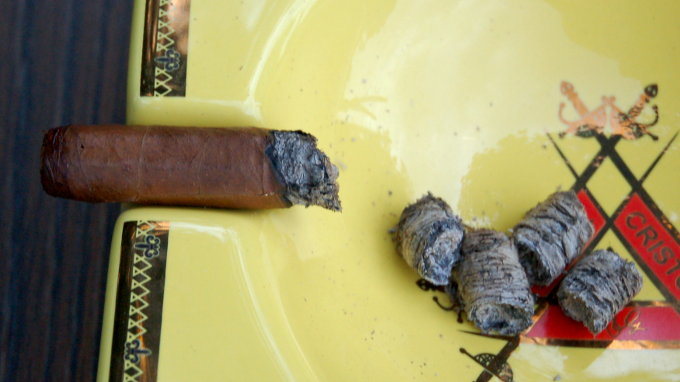 The coffee flavor has deepened, and the cream has tamped down. Sweetness is present, but so is the tangy cedar and citrus, and now a deep earthy component ushers in at the final two inches. Cinnamon spice continues to flicker through the flavor profile, and pepper remains present on the palate.

Strength has stepped up slightly, and it’s got me in a goofy state of mind. My writing suffers

A minty element has emerged. It’s hitting in the same spot as the cedar and citrus notes. Supporting them. Variations on a theme.

The wind continues to gust. The moon hangs low and bright as the sun sets behind me. A quiet chill is upon us. Soon it will be night. 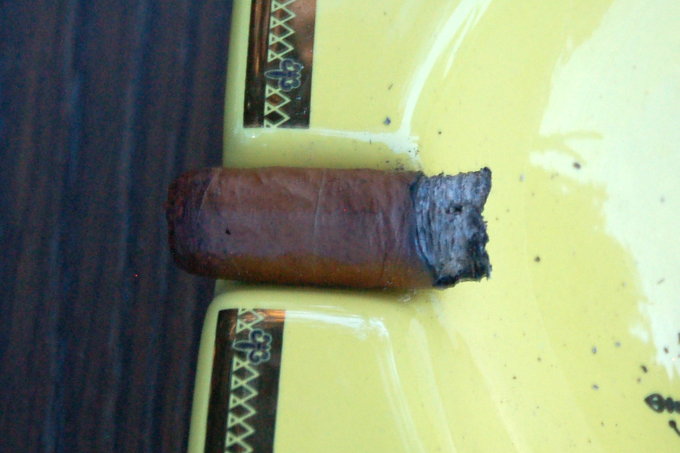 The flavors are also darkening. Coffee, chocolate, earth, cinnamon, mint, cedar, raisin, and a touch of anise with a pepper and cedar finish. At the final inch the smoke grows warm. This is where I will end the review. On a high note.

I have enjoyed my 6 pack of Partagas Spanish Rosados. The flavors are abundant, but they are also smooth and cogent. The blend has a certain mystique to it, with that red rosado wrapper. The cinnamon and baking spices come through and are supported by cedar and cream. Lots of sweet flavors. Right up my alley.

In a world full of boutique cigars the humble Spanish Rosado can be easily overlooked. And I guess it stopped selling for Partagas which is why it was ultimately discontinued. I think that’s a shame. This is a lovely cigar. Easy to smoke, good construction. Not a ton of transitions, but it does evolve through the smoke and offers an interesting and ultimately satisfying experience. Pretty complex all things considered.

It smoked well. It did require a touch up here and there, but nothing major. And I got the better part of 2 hours out of this slender stick.