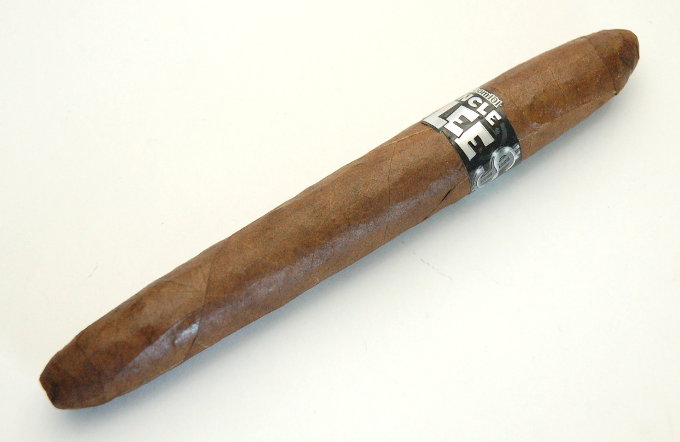 It’s the last day of 2017. We are having family over for dinner tonight, so much of the day was spent cleaning up the house and preparing a big pot of chili. It’s 2PM, and if I’m going to get a break in the day to review a cigar this is it.

I feel like I’ve been pussy footing around a little with my cigar reviews. I’ve been reviewing simpler, safer cigars to get my feet wet. I think I’m ready to try something a little more interesting.

These Uncle Lee by Room 101 were released in 2014. They must not have done well for whatever reason, because I picked up a box of 10 for $49 on closeout at Holt’s. I’ve had a few and they are excellent and unique cigars. Rolled by Davidoff for Matt Booth of Room 101, these Uncle Lees have some funky marketing but represent a serious value. Lets dive in.

The Uncle Lees come in an attractive box. Heavy on the marketing, each cigar is wrapped in white tissue paper and then a decorative paper sleeve. I yanked that stuff off when I got them, revealing a smooth milk chocolate wrapper with fine veins and mostly tight seams.

This cigar is a perfecto, meaning it’s tapered at both ends. The seams are tight for the most part. The cap on each cigar looks a little different. This one appears to have a knot on its head, and is crowned with a double cap. 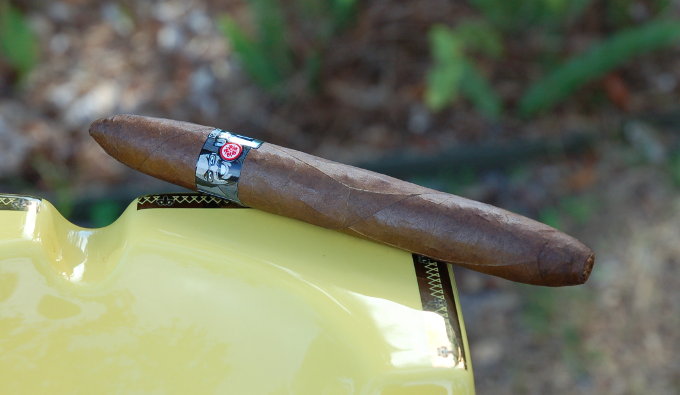 The cigar is lightly oiled and glistens in the sun. It’s firmly packed, and doesn’t have much give to it.

From the wrapper the aromas are faint. I get hay, light earth, and baking spices. From the foot I get cinnamon, hay, and all spice. I clip the cap and take a pre-light draw. I get gingerbread, cinnamon, and barnyard.

I start toasting and light her up. Start time is 2PM on the nose.

It doesn’t take much to get the narrow foot toasted and lit. Cream and light spices on the first couple draws. Then gingerbread, graham cracker, and a wonderful mix of spices. This isn’t pepper. These spices are more exotic. Ginger, cinnamon, clove, all spice. Sweet baking spices. Spiced raisins on the retrohale. The finish slowly fades. Gingerbread, earth, and light spice tickles the back of my throat. 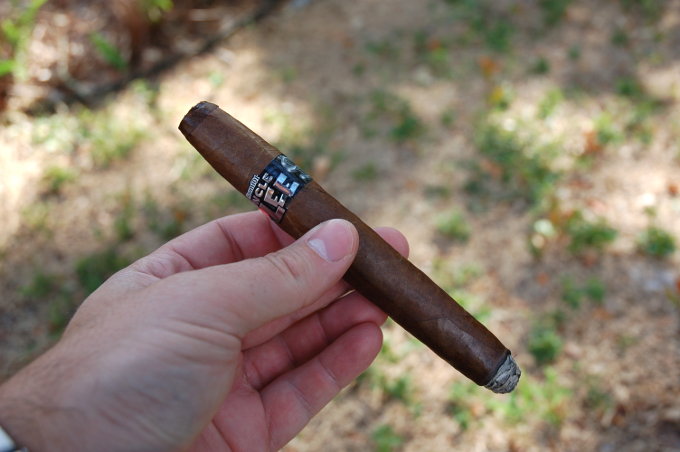 Right now the body is mild. Smoke output is plentiful. The burn is even, and a compact gray ash is developing.

The cigar has a definite raisin flavor. I’m getting chocolate as well as toast with a fine spicy finish. 10 minutes in and the burn is perfect.

It’s a mild afternoon in Southwest Florida. 70 degrees on the nose. We have a light breeze, gusting to 5 miles or so every few minutes, and unfortunately the aroma of the Uncle Lee doesn’t always linger. I hold the cigar under my nose and get caramelized ginger and sweet bread. 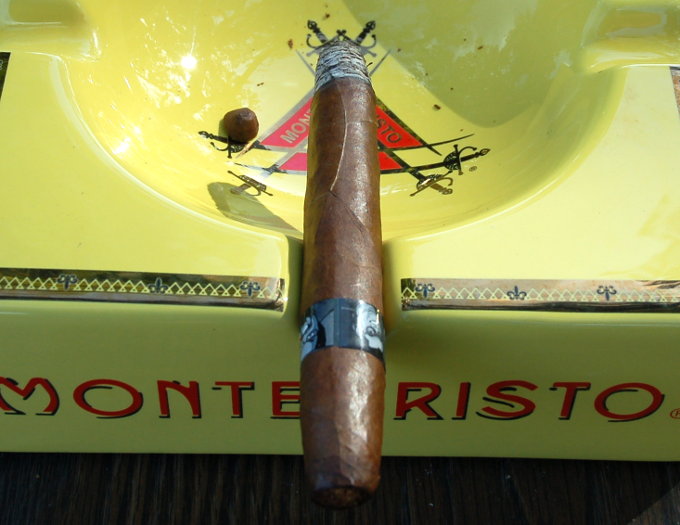 The ash resembles a tapered stack of coins. I take a puff and detect a light anise flavor. I take another puff and get a shot of cold cream, then raisin, anise, and chocolate. Then a bevy of spices. The finish is woody with a light raisin sweetness and plenty of light spice.

Smoke drifts lazily from the cigar. In the background I hear kids playing loudly a few houses down. A diesel truck clatters through the neighborhood. Working class suburbia at its finest. It’s nice to be able to enjoy a Sunday afternoon knowing I won’t need to trudge into the office in the morning.

As this stick heats up the oils glisten an inch or so from the burn line. Shiny like buffed leather. Body has stepped up to a solid medium. Smoke pours effortlessly from the cigar. The ash drops in an inch long chunk. 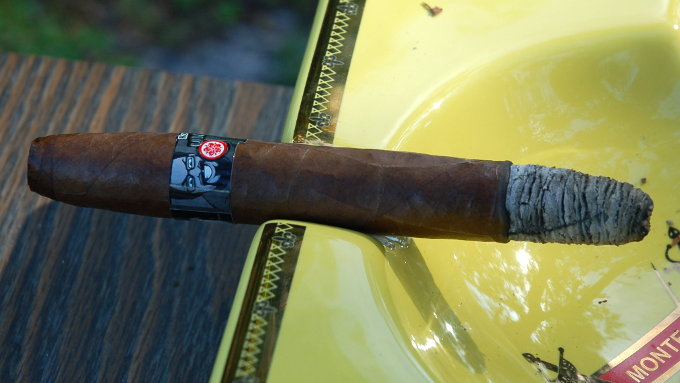 I’m getting some leather on the retrohale now. A meatier flavor in this otherwise dessert like stick. Sniffing the cigar is like inhaling a gingerbread house. Still getting that cold creamy flavor. Cold cream is an interesting sensation from a burning cigar. The way I describe it, is that the cream flavor is concentrated and the smoke is thick. It sounds impossible but the end result is that it literally feels cold on my tongue. That’s my experience at least…

My neighbor is on his roof. An old fat shirtless white guy in blue jeans with glasses. Tufts of thin gray hair blow in the breeze. He walks along his roof and then dips below my line of sight. That’s a first.

I’m still getting cream on the draw. Leather, cedar, licorice, raisin, wood, bread, and baking spices follow it. This is a complex cigar, but I’m able to distinguish the various flavors for now. Body is at a medium full.

The strength has also picked up. I’ve found this to be a strong cigar in the past. I had a turkey grilled cheese sandwich for a late lunch. Hopefully enough to get me through this Uncle Lee. 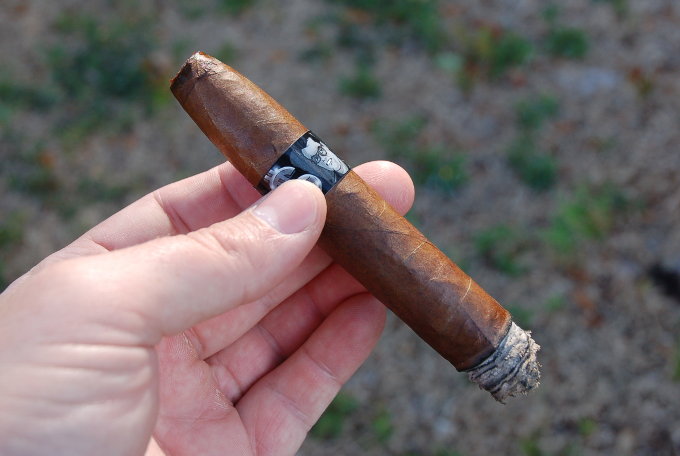 The burn has been perfect. I angered the cigar gods in my last review of the Padron Churchill Maduro. I cross myself and hope by singing this cigar’s praises I don’t fuck the burn up.

We are right at the halfway point now. Still getting the same flavors when I started the second third. The leather and wood mostly comes through on the retrohale. Gingersnaps and cloves pour from the foot smoke. The finish has grown longer. Light earth and spice remain on the palate until I take the next puff. The burn wavers slightly and then corrects itself. 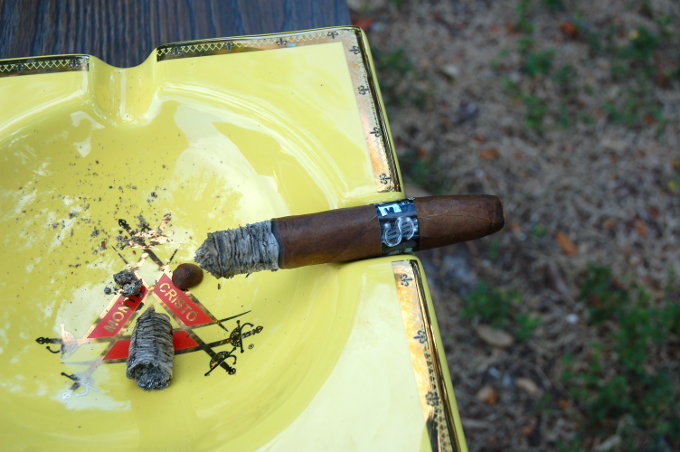 The breeze is picking up and the air drops a couple degrees. I run inside to grab a sweatshirt. I know, I’m a pussy. Florida spoiled me. I also checked on my chili. I come back and the Uncle Lee is quietly smouldering in my ash tray. I’m slightly light headed from the nicotine and mild exertion. I take a puff and the extra time away from the cigar rewards me with a taste of chocolate covered raisins. A second chunk of ash drops into the ashtray.

The flavors have shifted and I’m getting a stronger fruit flavor on the draw. Raisin or dried figs supported by a dark chocolate. The cream is backing down but is still present. Anise and raisin on the retrohale. The leather has gone away.

The raisin and fruit flavor is continuing to build, and is complimented by lots of rich earth and semi-sweet chocolate. Pepper on the finish.

The burn line marches steadily on like ants in a line. Davidoff rolled these cigars right. I know the company makes some good stuff, but I haven’t tried many of their cigars yet. Davidoff cigars are notoriously expensive, while I am notoriously cheap. At $5 a stick I think this Uncle Lee is a great way to sample their quality without selling bodily fluids, or putting a second mortgage on the house. 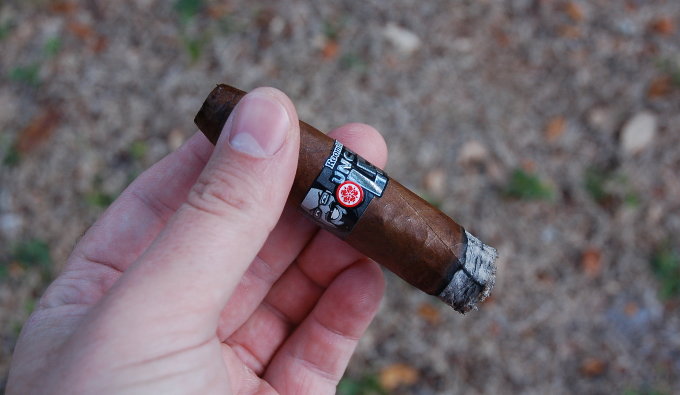 Each puff offers something slightly different. The flavors are condensing and re-emerging. First the cream. Then the cedar. Then the chocolate. Then the licorice. Then the ginger. A carousel of flavor. A smokey finish and that ubiquitous spice.

The breeze shifts in my favor, and I’m treated to an almost sickly sweet aroma of freshly baked gingersnaps cooling on a rack.

I am facing north and started the cigar with clouds on the horizon. They have blown south and now it’s nothing but sunshine and blue sky.

The char line has wavered slightly. Nothing to get upset about. I let the cigar rest on the edge of my ash tray. It’s on autopilot, hopefully set for a course correction. We are getting close to the band. Less than half an inch to go.

A honey bee buzzes past my ankles and lands on a small yellow flower. Our “lawn” is a patchwork of various types of weeds. It’s a true meritocracy here. Survival of the fittest.

The band slides off easily. No need to pick it apart. I know the band doesn’t mean anything, but it’s fun to look at so I will always include a picture of it. Here it is:

Coffee is creeping in. Coffee and licorice are now the biggest flavors. The cream and sweetness is gone for now. Full bodied, and medium full strength. The nicotine has me moving at half speed while the spice has me blowing my nose.

A few minutes later and the cream is back. Dark earth, licorice, coffee, semi-sweet chocolate, and spice all support it. The Uncle Lee is a heavenly blend weaving a rich tapestry of dark flavors. That’s what the nicotine tells me. There must be too much blood going to my brain.

I let the cigar sit for a minute or so between draws. Smoke continues to trail from it like a stick of incense.

We are down to the final inch or so. The warm wrapper of the cigar is tight, shiny and smooth. The cap has all but disappeared. 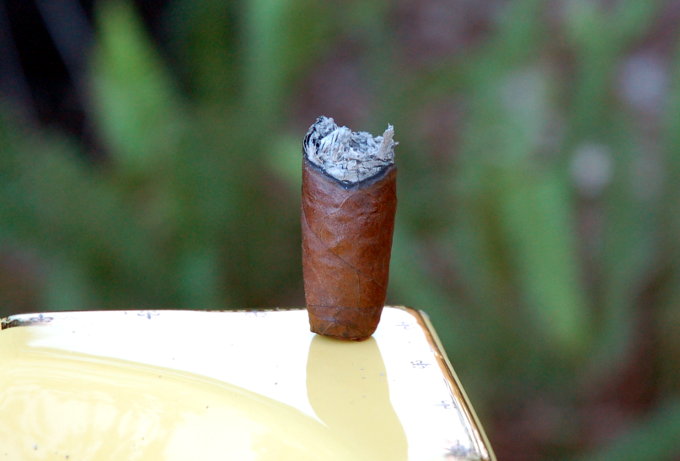 It burns very slowly now. The cigar grows increasingly bitter as the smoke peters out. I have about an inch left, but after a full 2 hours of enjoyment I decide not to relight it.

The Uncle Lee was dedicated to Matt Booth’s Uncle, who unsurprisingly was named Lee. Lee must have been a hell of a guy, as this is one hell of a cigar. Especially for $5. Rich, complex, and a flavor all unto its own. The raisin, ginger, licorice, and baking spices make for a distinct and memorable smoke. The construction is excellent. The cigar burned phenomenally well.

I shared one of these with a good cigar smoking buddy of mine, and he agreed: this is something special. It easily scores a “2” on my 0-2 scale. Box worthy. In fact, I snapped up a second box for long term enjoyment. If you are a fan of unique, full flavored, and complex cigars, with lots of baking spice and desert like flavors, then buy a box these before they are all gone.