This cigar was a Christmas gift from my girlfriend’s parents. They went to Cuba before Thanksgiving, and brought me back a handful of cigars (awesome!). A few weeks later they asked if I smoked them yet, and told them I hadn’t. They were a little disappointed as I explained how cigars need time to rest and acclimate in a humidor, and likely cigars fresh from Cuba would benefit with a few months of humidor time.

So for Christmas they got me this Cohiba Black, and told me it was ready to smoke since it came in its own crystal tube. They had to have paid near retail for it. With a MSRP at the better part of $20, I clearly have some very thoughtful in-laws. I’ll let the Cubans continue to rest, but I don’t want to disappoint them by sitting on this Cohiba Black for too long.

The Cohiba Black was introduced in 2006. Made from tobacco aged at least 3 years, and featuring a Connecticut Broadleaf wrapper and binder, it’s supposed to be a rich and powerful smoke. They offer the Black in a variety of sizes, but my understanding is that only their Robusto offering comes in the special glass tubes. It makes for a nice presentation piece, and perhaps a good choice as a gift for someone. Clearly I’m not the only one that thinks this way.

I have left the cigar in the tube sitting in my closet. I will smoke it straight from the tube with no humidor rest.

The cigar is easy enough to remove from the glass tube. Tug off the plastic cap and the cigar slips out easily. 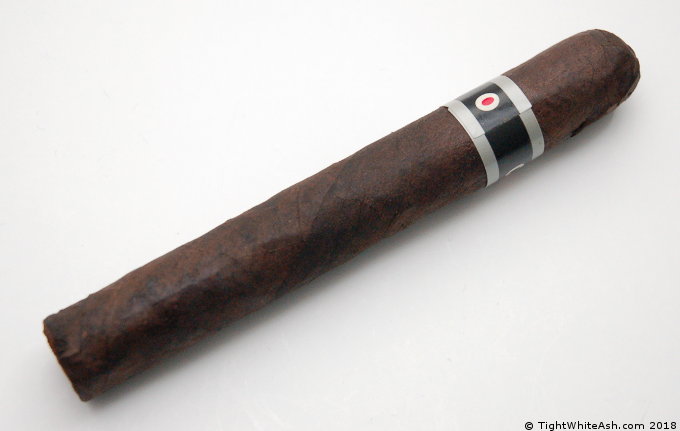 The wrapper is almost charcoal black. It almost looks like someone hit the high points of the wrapper with black shoe polish, as the base color is actually a dark brown.

The seams are tight and damn near invisible. There are some veins and the cigar has a slightly bumpy texture to it. There is plenty of oil in the wrapper, and what appears to be a double cap. The cigar feels heavy for its size. 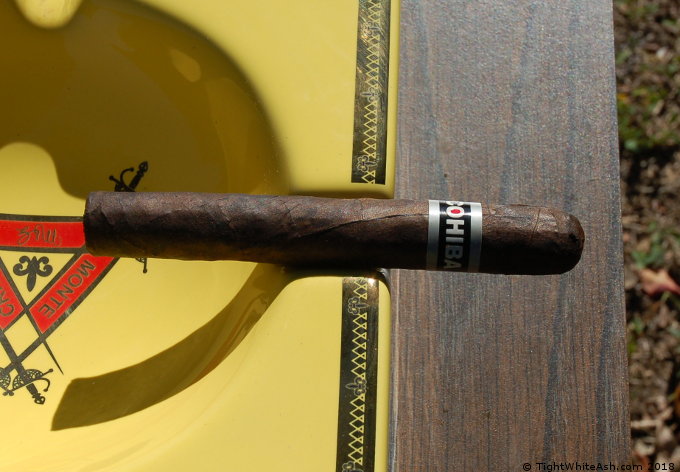 Sniffing the wrapper I get a powerful chocolate and barnyard aroma. The foot offers a lighter, hay, cocoa, and earthy smell. I clip the cap, and take a pre-light draw. It’s on the tight side, but I get earth, barnyard, leather, and cocoa.

I start toasting and light her up. Start time is a shade before noon.

From the start I’m getting whacked with flavor. Earth, dark chocolate, sweet tobacco, black pepper, and nuts. The aroma is sweet and nutty. The retrohale is tangy, with a little pepper. The finish is long with pepper on the back of my mouth, a light leather flavor, and chocolate.

The draw still feels on the tight side, but it’s producing plenty of thick smoke.

Today the weather is a cool 52 degrees, but it’s clear with low wind. There is not a cloud in the sky. Winds are occasionally gusting to 10mph, but otherwise I’d say this is perfect cigar smoking weather.

Tomorrow is MLK day. The courts are closed and I’ve decided to take the day off. I’ll probably work a little from home responding to any emails, but it’s been a somewhat quiet start to the year so I’ll take advantage of the downtime and escape from the office. One of my new year’s resolutions was to take more time off. Performing legal services is overrated. Who knows, maybe I’ll do another cigar review! 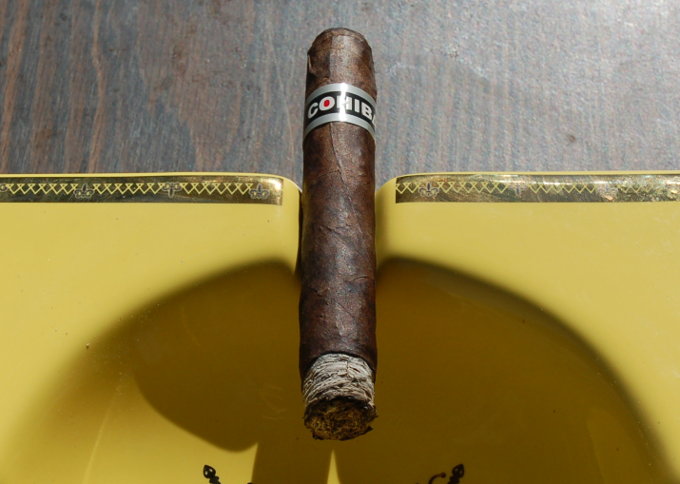 So this is something of a carefree Sunday given the long weekend.

Back to our Cohiba. 10 minutes in and the cigar is smoking pretty well. The burn was a little wavy at first, but it corrected itself.

The aroma is now a rich chocolate with nuts. The flavors aren’t overpowering me at this point. An earthy core backed by chocolate and pepper. I’m getting a little coffee on the finish and retrohale. The flavors aren’t complex, but the cigar is smooth and enjoyable. Medium to full bodied. No strength so far.

There is a sweetness here somewhere. It’s fleeting, but reminds me of toasted marshmallows. The treacly sweet aroma doesn’t hurt that impression.

We are about 25 minutes in and the Cohiba Black is forming a tight white ash. I knew I picked this domain name out for a reason. The ash is dense and the minerals inside it sparkle in the sunlight.

There is still this tangy flavor I can’t quite describe. I get it on the retrohale and now it is coming through stronger on the aroma. Kind of like barbecue sauce, but it lacks the brown sugar sweetness. Ketchup? It’s like a smokey ketchup. 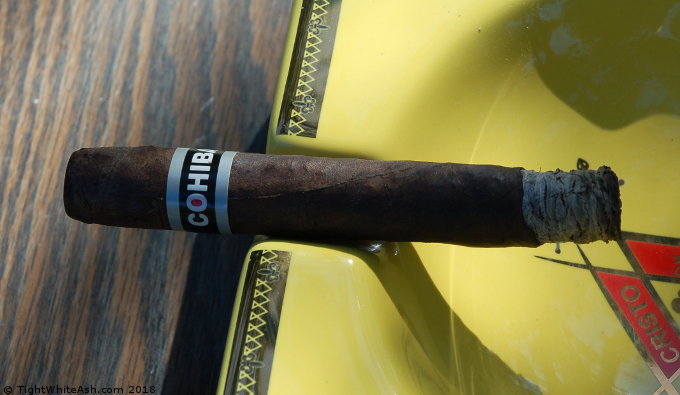 Smoke output is waning. I double puff the cigar and it seems to come back. Then it wanes again. Vultures circle high overhead, and as if on cue the Cohiba Black dies on me.

This cigar may require more puffing than usual. I typically try to take a puff every 45 seconds to a minute. Ideally I should be able to set the cigar down for a minute or two without issue. This one needs a baby sitter. Left unattended it will stuff a fork into an electrical outlet.

Smoke time is right around 40 minutes.

After the relight I get a lot more coffee. Body has stepped up to a solid full. Here is a list of the flavors: coffee, deep earth, dark chocolate, toasted nuts, and pepper. On the retrohale it’s mostly pepper and tangy black coffee. 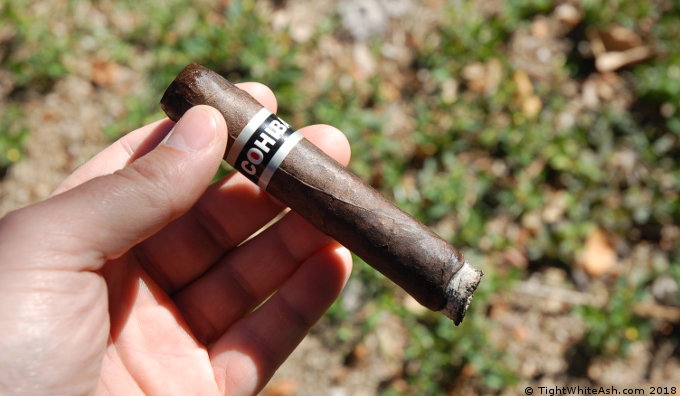 It’s nice, but if I paid anything north of $10 for this cigar I’d be disappointed. That’s a lot of jack for a cigar in my book. At that price the cigar should be doing cartwheels in my mouth. Blossoming with transitions and complexity. But I get the impression that isn’t the goal of this cigar. I keep puffing.

I have been reading the book “A Truck Full of Money” by Tracy Kidder. It’s a biography of Paul English, the founder of the travel website Kayak.com. What is interesting about the book is that it jumps around in time, and tries to explore the perspective of Paul, who suffers from being bipolar. It’s perhaps the best description of being bipolar I’ve read so far, a mental illness I know little about. 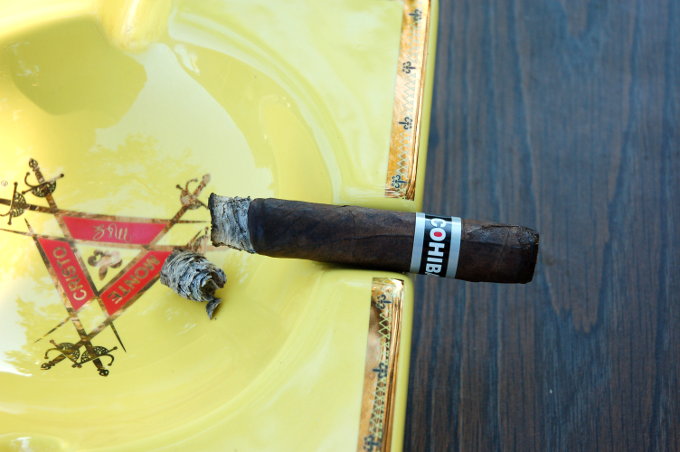 I’ve read a lot of business biographies, and the common thread is that the founder is always crazy. I’m crazy, but not crazy in the sense that it will drive me to create a billion dollar company. I think you also have to be brilliant. Crazy and brilliant. There’s always the lottery…

The flavors are changing slightly. We are getting more earthiness, perhaps a touch of leather, black coffee, chocolate. Less sweet, but still a desert like profile to it. Darkening slightly if that makes sense. Still a smooth cigar.

The wind has picked up a little, and the sun has shifted. The air is crisp for us tender Florida folk. I’m sure anyone north of the Mason Dixon line would kill for this weather. Me? I wiggle my toes to make sure they are still attached to my feet. 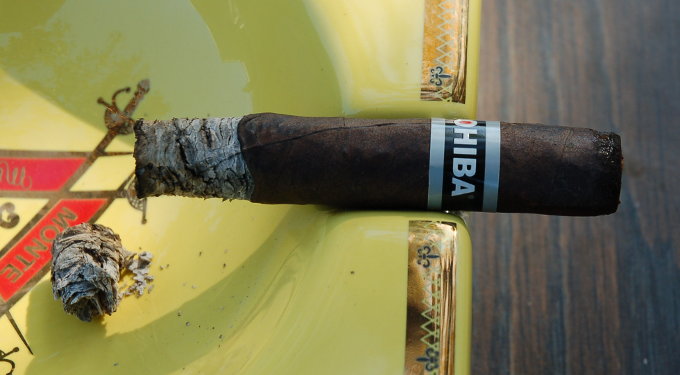 We are past the halfway point and strength has ticked up slightly. Still manageable. Not a nicotine bomb.

I’m not finding a whole lot to write about. That’s probably a good thing as I tend to ramble, but it also means not much is happening. These aren’t “Just the facts, ma’am reviews.” I want to take you along for the ride and try to tell the story of the cigar. This one ain’t saying much new. 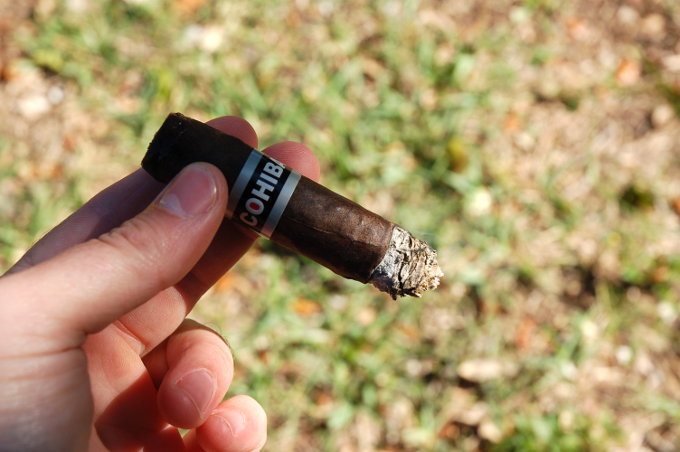 The burn has been consistent and even since that relight. The draw has also opened up. The Cohiba Black seems to favor a faster smoking cadence.

The flavor is taking on a sharper coffee bean taste. Perhaps the beginning of some fruitiness. The nuttiness from earlier has re-emerged.

Here is a full list of flavors: dark roasted coffee, coffee bean, deep earth, roasted nuts, semi-sweet chocolate, and a little black pepper. The flavors continue to be smooth and coherent. Balanced, but not particularly complex. That’s OK, not every painting needs to be a Picasso. I am enjoying the Cohiba Black for what it is.

We are getting close to the band. The band has been cemented to the cigar, and I can see dried glue behind the seam. I will take it off at the last minute.

One of my neighbors is an old Italian widow. I can here her singing unintelligibly on the other side of the fence. Songs from the old country. An odd soundtrack for this cigar.

The heat of the cherry has loosened the band. It pulls away easily and the wrapper is fully intact. That’s a relief. 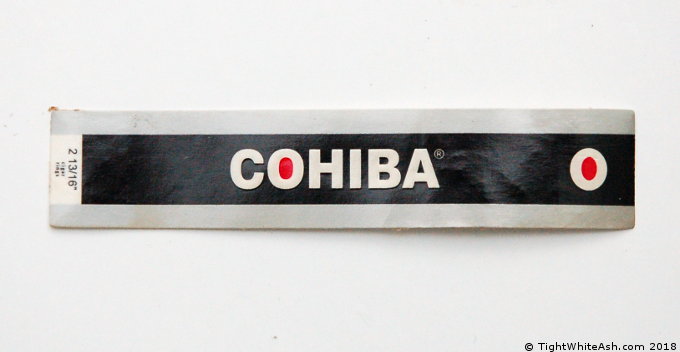 The coffee flavor continues to intensify. With an inch or so to go we are now bordering on espresso. The aroma is also a strong coffee.

Strength has kicked up. Still manageable, but I am struggling to get out of my chair to take a photo. The dark wrapper glistens under the sun.

In the last inch the flavors coalesce. Mostly coffee and earth. Still some chocolate. A hint of raisin. They blend together in the final puffs. 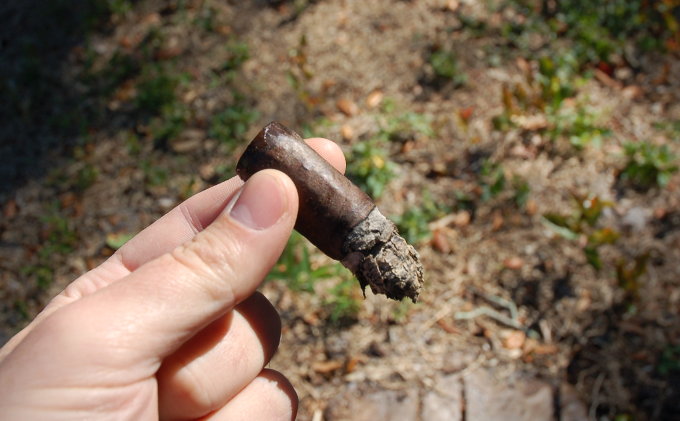 If you are in the mood for a smooth chocolate and coffee cigar, then the Cohiba Black delivers. It’s not complicated. There are no crazy transitions. It’s better than the Cohiba Red Dot I had a few months ago (before I started reviewing cigars), but not worthy of a double digit price tag.

I’d say this is a nice cigar to gift to someone that likes simple flavors plenty of them. This is a solid medium to full bodied cigar, and it has decent strength. Perhaps a good cigar for a wedding with a cast of manly men. I’m thinking beards and bow ties. I’m sure Cohiba’s marketing department agrees.

I’m not big on pairings, but could see this pairing nicely with a good stout or porter. The tube did a good job preserving the cigar and it smoked nicely right out of the bottle. All in all not a bad stick.