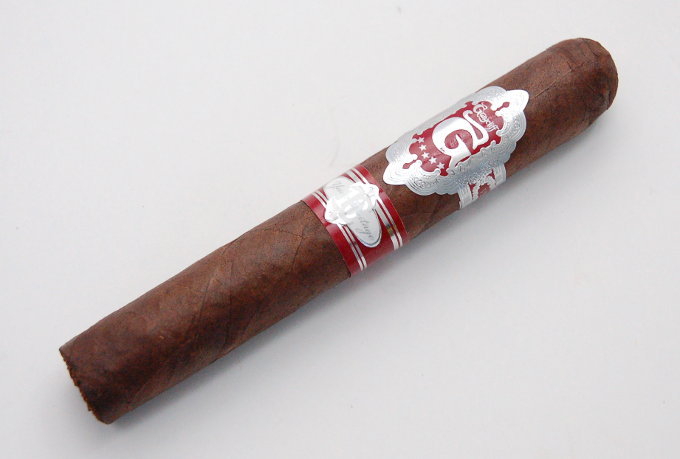 I was given this cigar as a gift from a cigar smoking buddy of mine. I don’t recall having a Graycliff before, and I knew nothing about this cigar until I sat down to smoke it.

It turns out this is a $15 MSRP smoke! Very rich for my blood, and not something I’d have purchased for myself. At least at the retail price. Thank you, Matt if you ever end up reading this. 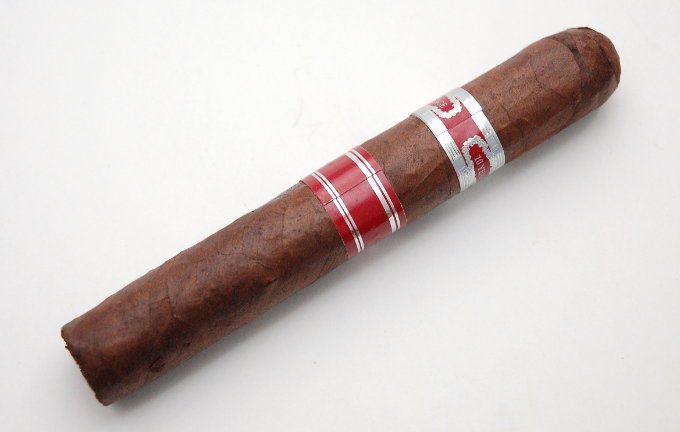 I tried to do a little more background research to figure out what I was smoking. It’s tough to find something on this cigar besides sales copy. Apparently, the Graycliff Cigar Company was founded by a couple hoteliers in the Bahamas. They have one page on their website dedicated to their cigars. It offers no information about their blends, and is mostly a sales page for cigar rolling lessons if you visit their hotel.

From what I can tell this cigar uses tobacco that has been aged for 10 years. Who the hell knows for sure.

The cigar has been resting for at least 3 months in my humidor, and presumably it’s rested months (or possibly years) in Matt’s humidor before that. The cellophane had a slight yellow tinge to it as I pulled the Vintage Maduro from its protective sleeve. Nothing crazy, but suggested the cigar had some form of downtime.

The 10 Year Vintage has an oily, rich brown wrapper. Seams are near invisible but there are plenty of veins. The wrapper is nice and shiny. The cigar has a double cap that appears to be applied rather hastily. Besides the cap it is a handsome cigar. 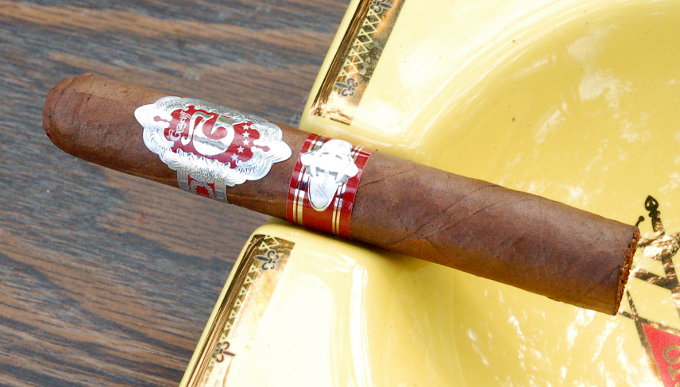 I start smelling the unlit cigar. From the wrapper I get rich tobacco and barn yard. Earth, hay, dates, sweetness, and barnyard aromas from the foot. I clip the cap and take a prelight draw. Tons of chocolate, raisins, cedar, and earth. Quite a fragrant pre-light draw.

I start toasting and light her up. 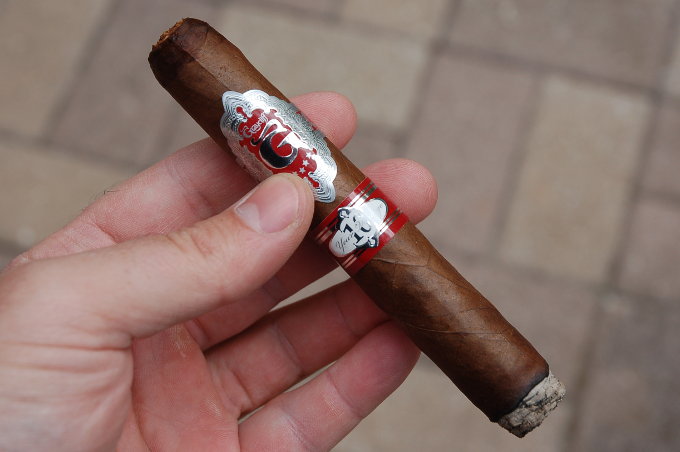 Start time is 2PM today. It’s a cool day here in South Florida, 60 degrees according to Google. It’s currently overcast, but the sun is trying to burn a hole through the cloud cover. There is a light breeze, around 10 miles coming from the north, so I’ve tucked myself behind the house to try and minimize its effects. Wind is never good for cigars, but I’ve gotta smoke outside and I work during the week. Gotta make hay while the sun shines.

This Graycliff 10 Year Vintage has a long raisin finish. Cedar is creeping in to the blend but so far it’s predominantly chocolate and raisins.

10 minutes in and the cigar is burning nicely. A near razor sharp burn and decent smoke output. A solid gray ash is emerging, and if I look closely it twinkles with minerals. The draw is a little on the firm side, but that’s OK.

Suddenly the sun punches through the clouds and I’m reaching for my sunglasses.

This past week was a short one thanks to taking off Monday, and Tuesday for new years, but that made coming in Wednesday all the harder. I’m a lawyer, and it seems like everyone’s resolution is to get their legal work wrapped up. Lots of people wanting to know what happened with their cases over the holiday (nothing). ‘Tis the season.

Back to the Graycliff. Not much new to report. A heavy nut aroma comes from the foot smoke. Similar flavors as before from the draw. I’ll smoke on this one for a bit and report back when I have an update.

I’m not getting much spice with this one. A light dose of pepper if I retrohale it, but that’s it. The entire cigar has developed a light sweetness. I have a sweet tooth to the point where I don’t keep deserts in the house as they just get annihilated. So no complaints about the sweet profile of this Graycliff.

I searched for reviews on this cigar and couldn’t find much. Folks on retailers sites have reviewed it relatively favorably, and I found a YouTube review (didn’t watch it), but that’s it. No detailed write ups. Odd. 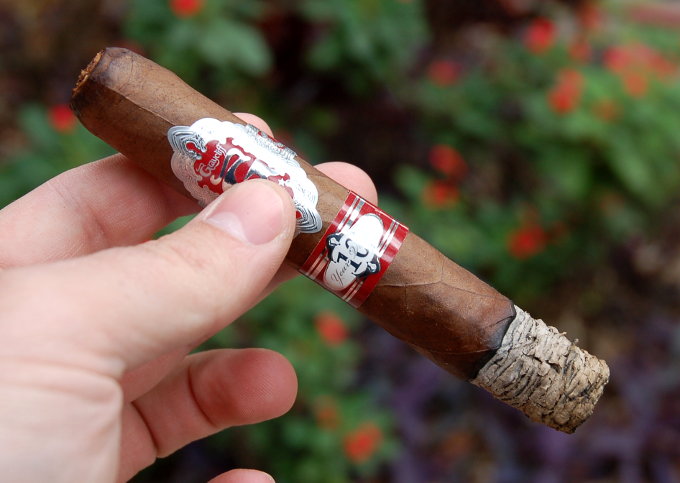 30 minutes in and I have smoked an inch of the cigar. It’s a slow burn, and we are most of the way through the first third. The cedar is coming on stronger, but still getting plenty of chocolate, raisins, and nuts supported by earth and creaminess. Roasted nuts on the retrohale. The burn line is near razor sharp.

I’m starting to get a stronger fruit flavor. More of a prune or juicy plum then raisin. When I let the cigar rest I get more cream when I finally take a puff.

The ash is still hanging tough, but gravity is taking its toll. We are getting a leaning tower of Pisa effect here. As if on cue the ash gently breaks away as I set the cigar down. It’s a single solid chunk. Nice.

Smoke time is at 40 minutes. At this rate we will have a 2 hour robusto. At least you get a slow burner if you decide to spend $10 or $15 on this cigar. So far I’m not getting a $15 cigar, and would be disappointed if I put down that kind of coin for it. But a gift I’m enjoying the 10 Year Vintage.

Here are the flavors I’m getting now in the order I am experiencing them: creaminess, raisin, prune, dark chocolate, earth, cedar, toast, nuts. The finish flavors are nuts, light wood, and light spice. 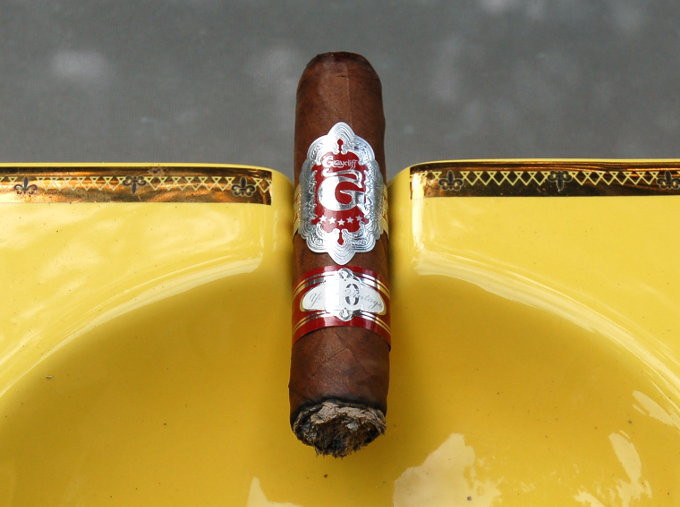 Suddenly smoke output drops. Shit. I’m fighting with this Graycliff to keep it alive. I see tell tale signs of tunneling: the wrapper has buckled behind the burn line. The death spiral continues, and I’m hardly getting any smoke now. Doctor, we’re losing him!

Seriously, this isn’t good. I decide to let it go out completely and give the cigar a few minutes to cool. I scoop out the ash with my pocket knife and reboot it with my torch lighter. 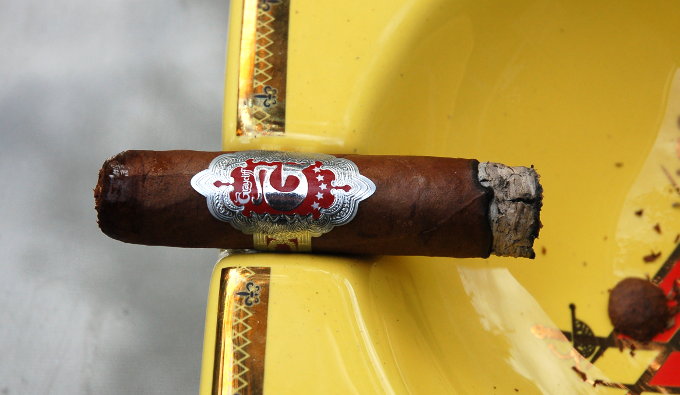 We are within a quarter inch of the first band. The main band has been spinning around like my bowtie in the courtroom, but this first band is a little more snug. Thankfully it tugs away with minimal effort.

The flavors are more or less back, but now they have taken on a darker character. The sweetness in the beginning has turned slightly bitter. The chocolate has gone from chocolate, to dark chocolate, to now a semi-sweet baker’s chocolate. I’m getting light baking spices now as well. Nothing crazy like the Uncle Lee, but a noticeable change.

Smoke trails gently from the foot. We have passed the halfway point and the final third is fast approaching.

Body has stepped up slightly and the strength has crept up a little as well. Still a solid medium for both. 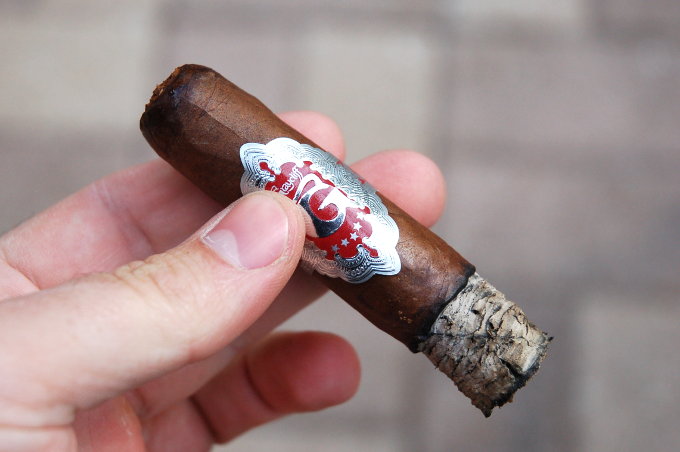 Smoke output has waned again. Goddamnit. I’m trying a few double puffs to keep the train running. Doesn’t look like it will work. Only a shot of pure adrenaline straight to the heart will resuscitate this cigar. A shame because the burn is otherwise even. I don’t get it. And then it goes out.

I take a picture for posterity and commence my re-light ritual.

First I knock away the 3/4″ of ash. Then I scrape away the flaky remains. I then purge the cigar with a single blow through the foot. Finally I relight it.

The flavors upon relight aren’t good, and we are now within a quarter inch of the final band. I pull it away and say a Hail Mary. Hopefully the flavors recover after a few minutes and the cigar stays lit. At this point I would be wanting my $15 back if I paid anywhere near retail for this cigar. 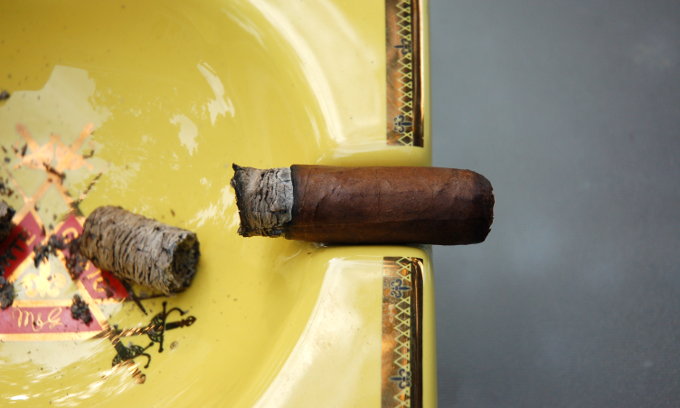 After the 10 Year Vintage calms down we have prune, raisin, coffee, semi-sweet chocolate, and earth. Spiciness has stepped up on the finish, and there is also an element of burnt toast leaving a long bitter finish. Yum.

A menagerie of dark flavors points to either an underlying complexity I can’t fully appreciate or an overcooked stick. I’m leaning towards the latter, but the cigar remains cool to the touch. I take a swig of water to try and re-set my taste buds. That actually improves things a little and the nuttiness re-emerges.

I get up to take a picture and I can feel the effect of mild nicotine. The aroma is still sweet and nutty, but it’s not translating to my palate. 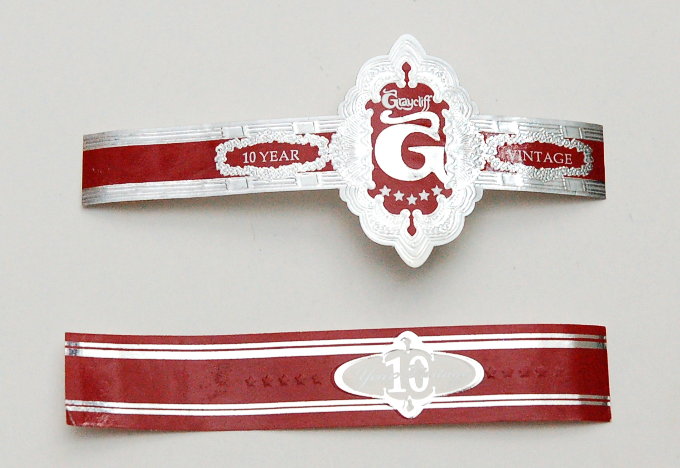 At least the burn line is mostly even. Smoke curls beneath my thumb as I examine the nub. It’s cool and a little springy. Ferns rustle gently in the breeze.

Raisin is still there but I’m getting mostly indistinct earth, wood, and a dark coffee element. Light spice. Bitter coffee dominates the finish and lingers in my mouth. Yuck.

Smoke output wanes once again. And it goes out. We are just shy of 2 hours, and I have an inch and a half left of the cigar. I decide not to relight it.

This cigar started with so much promise. Lovely flavors, and a true desert like first third. Right up my alley. But a huge disappointment with the relights. Not so much because I had to relight the cigar, but because I think it hurt the flavors. Some cigars can easily recover after a relight. This one couldn’t.

And I didn’t get much in the way of transitions. The initial flavors just got more bitter as we moved through the cigar.

Maybe this is why there are no independent reviews. I have no clue. Quite a few people on CigarsInternational really like this one. 4.6 out of 5 stars over 44 reviews. Maybe I got a bad stick? Mine had plenty of rest. I’d rate this 2 out of 5 stars and 0 out of 2 on the 0-2 scale.

I could be wrong on this one. If another crosses my path I’ll try again and update the review. Leave a comment if I missed the mark. I’ll never proclaim to be God’s gift to cigar reviewers. Just another (long winded) opinion as you search for your next cigar.