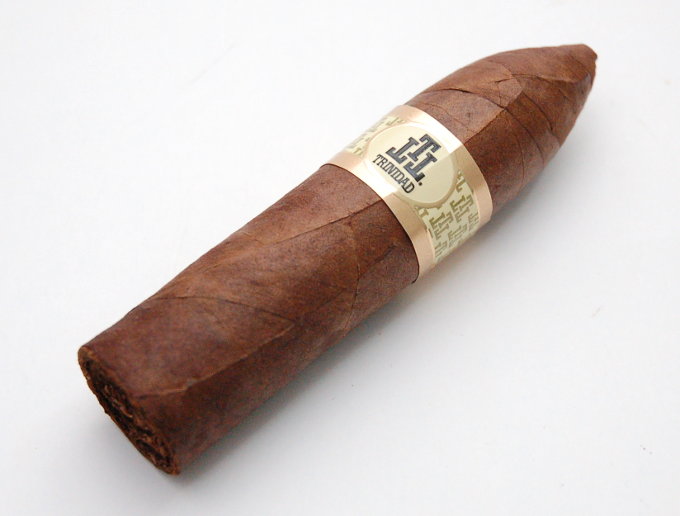 This is a stick I picked up on a whim from Holts.com. They were pushing it pretty hard and it had decent reviews. I snagged a 6 pack for $13, so at just over $2 a stick I guess the price was right. Checking Holt’s now I see they currently offer a bundle of 20 from $40 to $50 depending on the size. These are probably on close out so who knows how long this deal will be good for.

I tried smoking one a couple weeks after receipt and it was unsmokable. All sorts of burn issues. It was clear it needed more humidor time. I tried one after 6 weeks and it was slightly better, but still had issues. Now we are at the better part of 4 months. 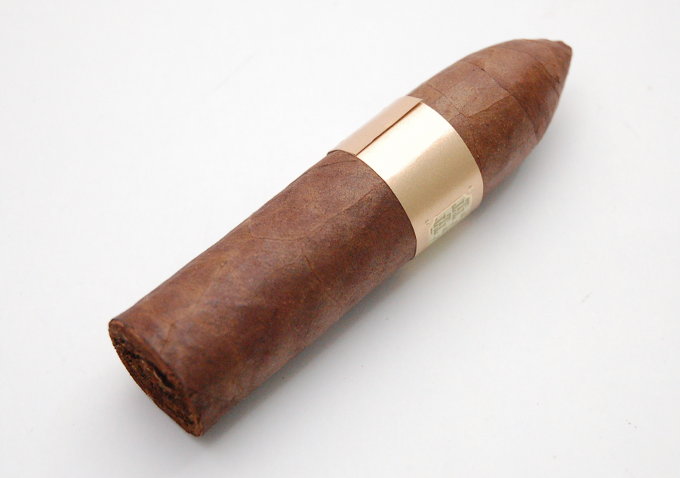 It’s 4 PM on the Friday before New Years. I snuck out of the office early, and only a precious few days remain in 2017. I’m planning for a relaxing cigar heavy weekend, and thought I might whet my appetite with this short and mild Trinidad Reserve. Lets see if a couple more months of humidor time has done anything for this stick.

This is a short fat cigar. Tightly rolled with a couple prominent veins, but tight seams and a nice triple cap. It’s a short big ring gauge torpedo. The wrapper is smooth and has some shine to it. A pleasant brown with dark patches. The cigar is packed and yields slightly to my fingers. 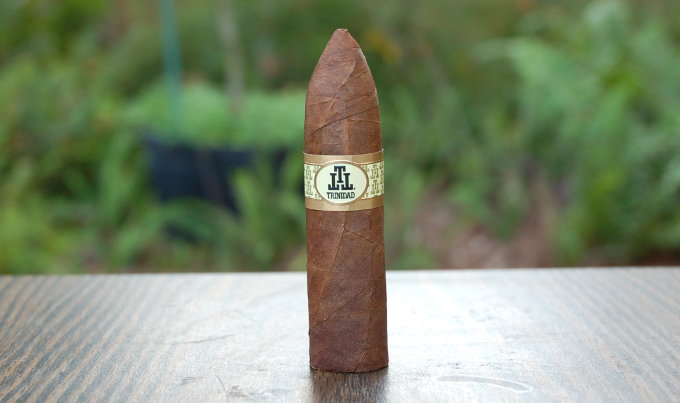 For our pre-light aromas, I’m getting hay and honey from the wrapper. Hay, honey, and a stronger barn yard scent from the foot. I remember to take a pre-light draw and get hay, cream, honey and cedar.

I get to toasting, which takes a good while for this 60 ring gauge stick.

The first few puffs are a little harsh, but the cigar quickly settles in to cream, nuts, and a light cedar. The retrohale has a strong nut flavor with a light dose of pepper. The finish is short and quickly fades. 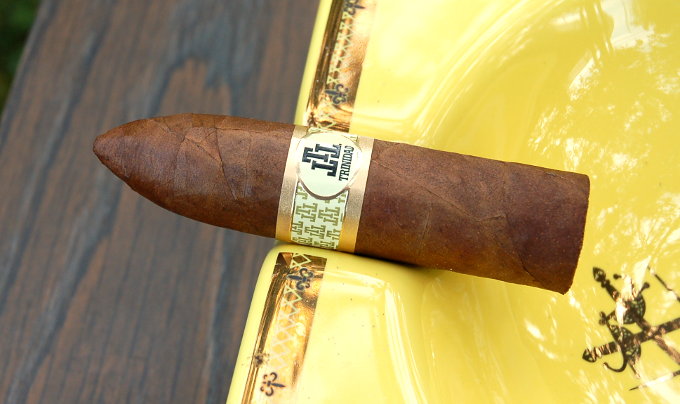 The burn immediately goes ape shit on me, resembling the profile of a demented roller coaster track. I hope I have enough butane. I correct burns when I think they need it, but won’t doctor up the burn line for the sake of the photos. What you see is what I got.

Smoke output is OK. Plenty coming off the foot, and a decent amount when I puff on it. The body is mild. Very mild. 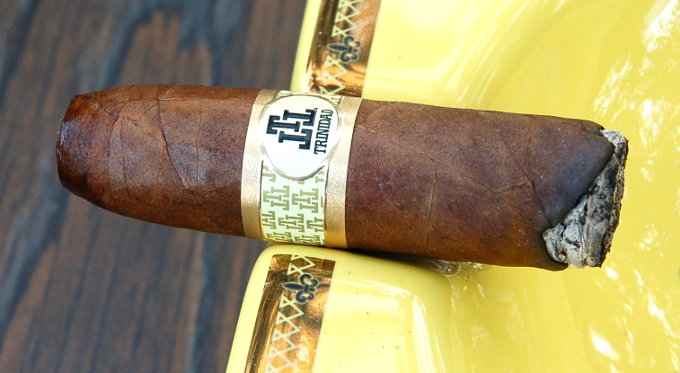 10 minutes in and we are due for our first correction. I lance off a sizable chunk of wrapper. It fills the air with a pleasant sweet smelling smoke. The cigar now looks presentable.

15 minutes in and the cigar is opening up further. I’m getting coffee now, and some spice on the tongue. Some earthiness is also creeping in. Cream, cedar, and maybe a hint of leather. There are flavors here but they aren’t strong. 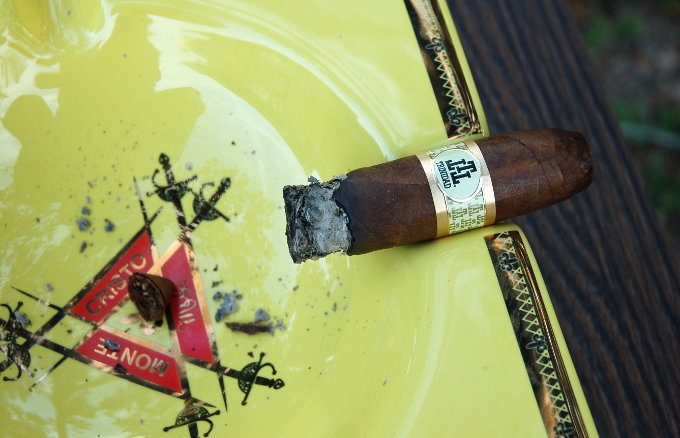 The burn line is also creeping a bit. Wavy but nothing needing a correction.

Overhead a squirrel screeches at me. He probably smells the nutty aroma of my Trinidad Reserve, and is making not-so-subtle plans to caper off with my cigar.

I’ll say that 3.5 months of humidor rest has done this cigar some favors. I don’t typically buy big ring gauge cigars as they generally don’t burn as well as the smaller ring gauge sticks. And I know torpedos can be tough to roll properly, and they crammed a ton of tobacco into this 4″ smoke. So the deck is stacked against this short belicoso. It probably needs 6 months to a year to marinate. 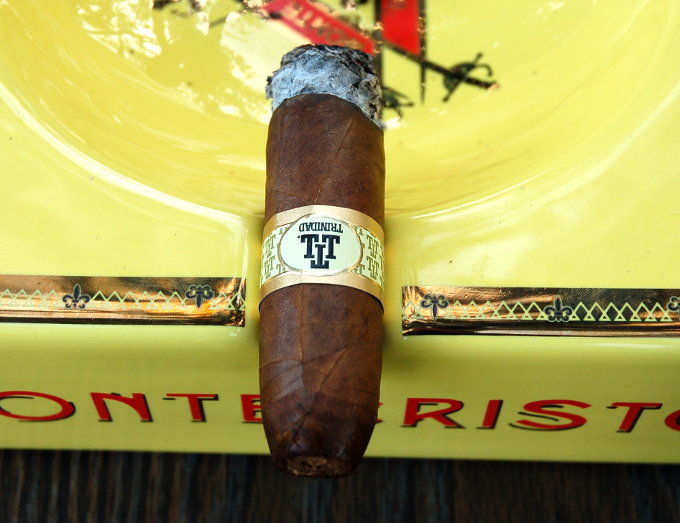 25 minutes in and the burn has slowed down. I’m getting lots of toast and nuts, and vanilla in the aroma. The cigar isn’t smoke as much and suddenly it’s tough to take a draw. I’m double puffing. I left my crystal ball in the car, but sense a re-light on the horizon. I snap a picture for posterity and prepare myself to re-ignite my Trinidad.

Smoke time is at 30 minutes. 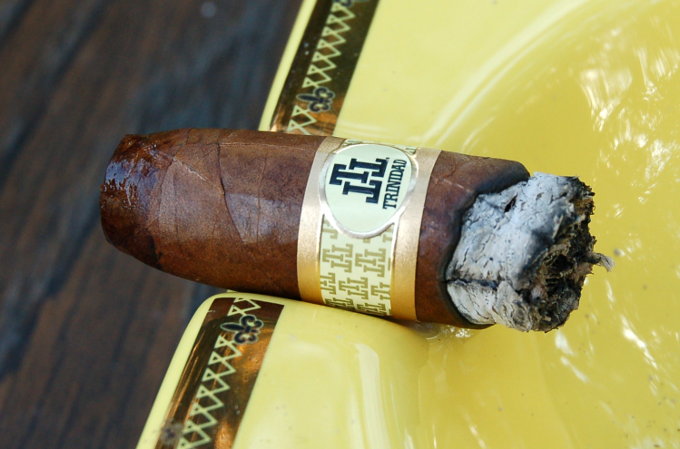 Toast, coffee, cream, and a light spiciness are the flavors I detect. Spice and nuts on the retrohale. The body has stepped up to a mild medium. The burn was even upon relight, but then, like the Florida defensive line, a run opens up and the wrapper burns away unevenly towards the band.

The band pulls away easily. Not much glue on it and the wrapper is left intact. 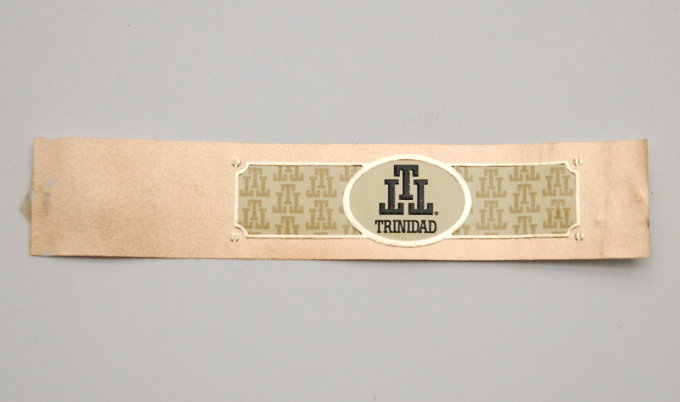 The flavors are pleasant and I get hints of wood and caramel. The aroma is sweet and mild.

The cigar is smooth and inoffensive, but the burn is jacked up and shocks my conscious. I prepare to correct the burn again, which will effectively torch 25% of the remaining wrapper. 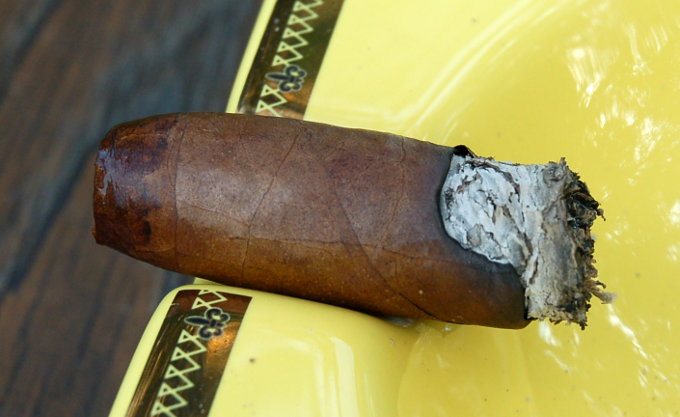 I’m getting notes of coffee and burnt caramel.

I’m not finding a ton to write about here. The experience of smoking this Trinidad is mildly frustrating. As the burn becomes more uneven the draw becomes tougher. Like smoking the cigar through a straw.

Flavors are trending a little darker than the first light, but you still have a core of nuttiness on the retrohale. That seems to be the thread that binds this stick together. Then you have complimentary flavors of coffee, toffee, earth, light wood, and a little cream. Spice comes and goes. The flavors are good, I just wish there was more of it and I wish the cigar smoked better.

But this cigar was $2 and change, so it’s not like this is a $7 stick let alone $10+. I’m sure some folks would love this cigar as a yard gar, a budget daily smoke, or something to offer to friends that aren’t big cigar smokers. I would recommend a different vitola then this short belicoso. It’s just asking for trouble. Plus, my jaw is starting to ache. 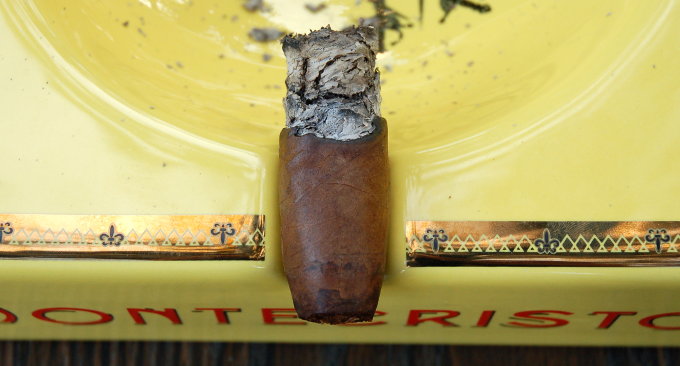 At the hour mark the flavors continue to pick up steam. I’m getting a nice richness, and a little nicotine.

The wind picks up and the air has chilled. 65 degrees according to Google. That’s nippy by South Florida standards, and the survey says it’s supposed to drop to to the 40s this weekend. I’m sure that’s a warm winters day in most parts of the USA. Still I opt for a sweat shirt.

The cigar becomes harder to draw on so I knock off the excess ash. Like pulling the choke on a wheezing lawnmower, the Trinidad Reserve shudders back to life.

The cigar seems to be going out again. I attempt to give the Trinidad mouth to mouth resuscitation, and the flavors wash out. I set the cigar down to cool and it goes out within 30 seconds.

I scoop out the gray ash and attempt one final relight, wagering nose and beard hairs on this Hail Mary play. The oils in the wrapper glean like my forehead on a warm summers day. 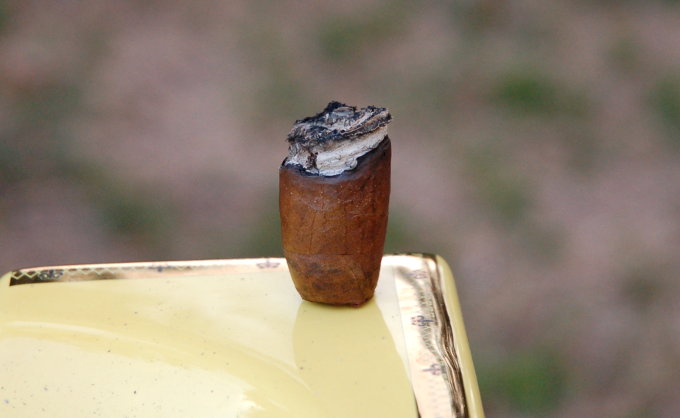 I’m getting mostly bitter coffee and earth along with elements of the aforementioned fruit. The finish lingers in my mouth. Still that nuttiness on the retrohale. We are nearing the end of our Trinidad Reserve.

As I finish out the cigar I get increasingly bitter and indistinct flavors. Body and strength both finish out as a medium in my book.

The sun has dipped below my line of sight. Crickets chirp peacefully as the work week comes to an end. In a final act of defiance the Trinidad Reserve goes out on me again. With an inch of nub I don’t opt for a relight.

The Trinidad Reserve leaves me conflicted. Yes, parts of the experience were frustrating, but I also think the cigar has a lot going for it for under $2.50. It looks to be nicely constructed, and offers a pleasant combination of flavors and some transitions. Not hugely complex, but what do you expect for $2.50?

I do not recommend this short belicoso vitola. They offer this in a plain toro, and given the option I’d get that, then I would put it in the bottom of my humidor and forget about it for a year. I think if you do that you will have a nice cigar on your hands.

Two relights and two large corrections. That’s actually not too bad compared with my first attempts to smoke the Trinidad Reserve. This is a cigar that benefits from a long stay in the humidor. It has gotten a lot better after over 3 months of rest, but I think it still has a ways to go. I have 3 of these left. I may give a couple away, but will hang on to at least one to try again at least 3 months from now.

I’ve never smoked a Cuban Trinidad, so I have no clue how this NC compares to the real deal.

I’d score this at an 80 if I were grading it like a term paper. Not horrible, especially considering the price, but not something I’m going to reach for as my Saturday “main event” smoke either. It may score a little higher with more humidor time or in a different vitola. Impossible for me to say at this point.

On the 0-2 scale, I’d rate it a soft 1. Not a cigar I plan on buying again, but I’d smoke it again under the right circumstances, and I think it may have its place with some people. This is where the lack of sensitivity of the 0-2 scale shows its cracks. I’d probably cheat and say it’s a “.5”