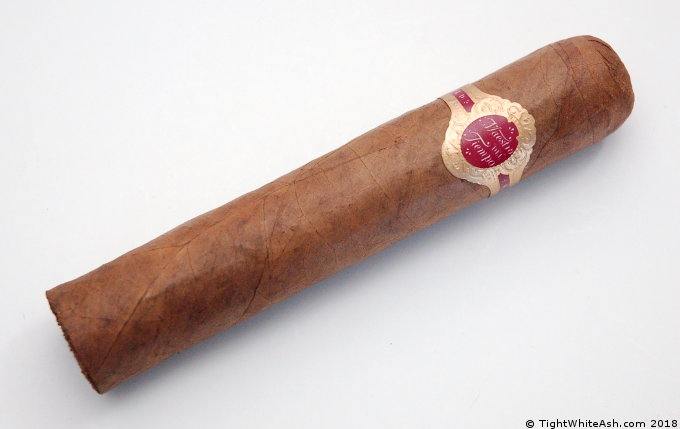 On the docket today is the Warped Maestro Del Tiempo.

Maestro del Tiempo means “Master of Time”. Warped has a pretty good product description page where you can learn more about the blend. If you are reading this review you likely already know about this one.

Warped wasn’t around when I first started smoking cigars. After I got back into hobby after about a significant break, Warped was a brand that kept coming up on forums. They are known for a cult following, and apparently some good cigars. So it was only a matter of time before I scooped up the Master of Time. 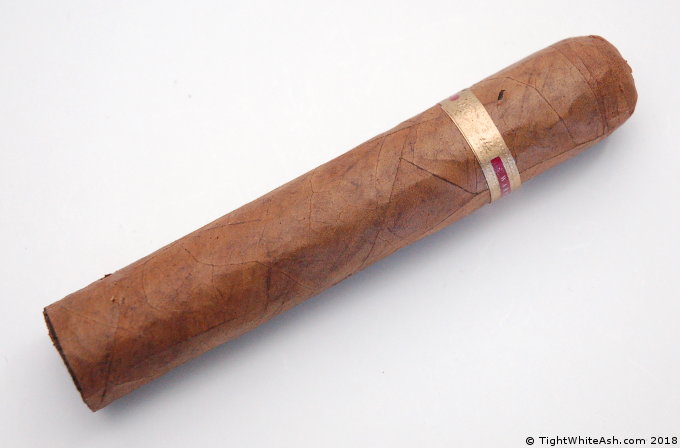 Unsurprisingly, I got a good deal on these Maestro del Tiempos, paying less than $4 a stick. They have been sitting in my humidor, and I’ve been slowly smoking on them. I’m ready to go.

This is a fat little stick. They call it a robusto, but it’s a little shorter and a little fatter than your typical robusto. The wrapper is a mottled tan color. It reminds me of worn leather. I had a camel colored wallet that I used for years before it wore out. This wrapper reminds me of that.

The veins are dark and burnished. The wrapper is fragile and there is a small tear near the band. Hopefully not an issue. I stored this cigar in the cellophane, but maybe it got jostled somewhere along the line. 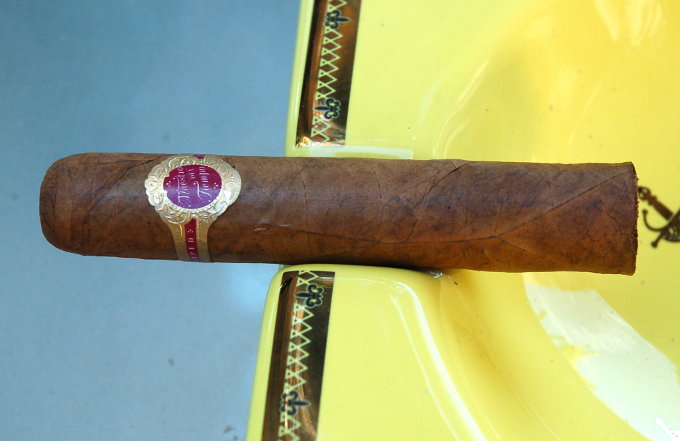 At any rate the wrapper has a light tooth and a light oily sheen. There is a triple cap, and it also has a small tear in it. Hopefully this cigar doesn’t fall apart on me. If it does I have a backup. It feels heavy for its size. Densely packed. 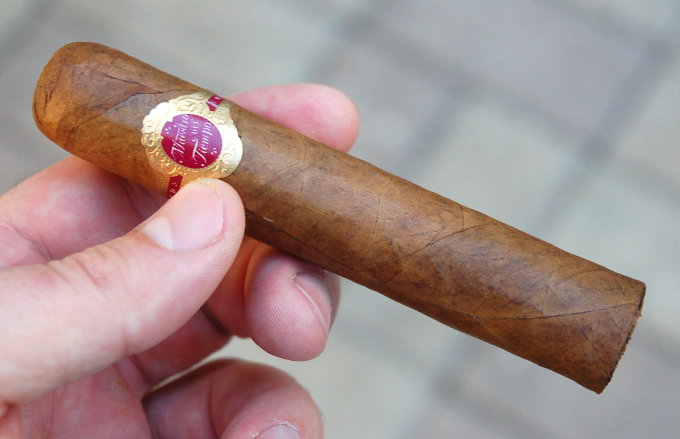 I clip the cap and take a test draw. It seems a little tight. The prelight draw tastes of cream, cedar, and graham cracker. I start toasting and light up. Start time is 2:45 P.M.

The first few puffs are mostly red pepper and honey. A little cream and graham cracker in there as well. The retrohale is very peppery and is a bit much to retrohale comfortably. The finish is long and peppery. The pepper lingers on the back of your throat.

Out of the gate I’d peg the cigar at a solid medium body. Plenty of smoke output and a decent draw. Interesting start to this cigar, as honey and pepper is not a combination you see often. 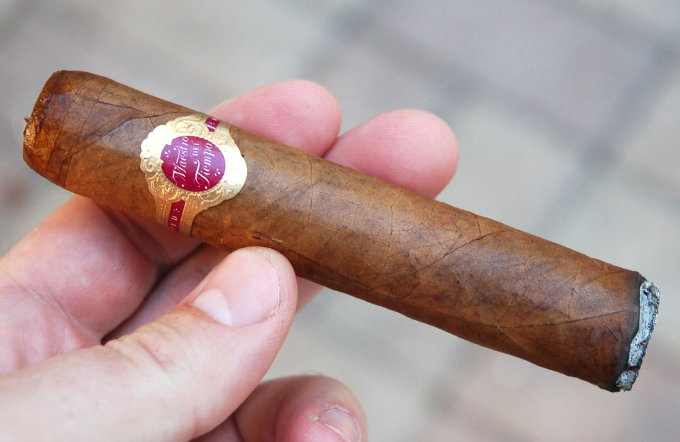 The aroma is sweet and nutty. After 5 minutes nuts make their way into the overall flavor profile. I’m getting a creamy cashew. It’s pleasant and plays nicely with the honey and pepper.

From first light the burn has been a little wonky. One side has burned a good quarter inch. The other side, maybe a couple millimeters. Hopefully it evens out.

It’s a quiet Sunday afternoon here in Southwest Florida. Tomorrow is Christmas Eve so it’s a long weekend. I took Friday off and have been enjoying the down time. Mostly by working out, reading, working in the yard, and smoking cigars. Some booze and junk food in the evenings. I bought a bottle of Tawny Port and have been sipping on that. Ho-ho-ho.

At the moment I’m staring at a cloudless powder blue sky. The late afternoon sun is behind an oak tree. Golden light filters through the leaves and a gentle breeze softly stirs the palm fronds. It’s nice. Probably 65 degrees and I’m in shorts and a sweat shirt. Friday the wind was gusting to 40 miles an hour. Impossible conditions to enjoy a cigar. This, on the other hand, is quite nice.

And this cigar is nice too. Light cream, honey, nuts, generic wood, and a good deal of pepper. Maybe slightly less than first light, but still a peppery smoke. The retrohale is very peppery, but I’m also getting some honey. Really clears the sinuses.

The burn is slow and ugly. Maybe half an inch as burned and the oils are glistening near the char line. A cigar this densely packed will need to be puffed on frequently. Otherwise I think I’ll be getting tunneling.

Already I’m getting some strength. I learned the hard way that this is a strong cigar, so I made sure to have a big meal before starting. But that may not be enough. There is a big nicotine wallop in this stick. I’m a bit of a pussy when it comes to this sort of thing, so I may need to step inside for some honey once I’m further along. We shall see.

The flavors have remained more or less the same. A light citrus has found it’s way into the mix, but that is about it as far as new flavors go. 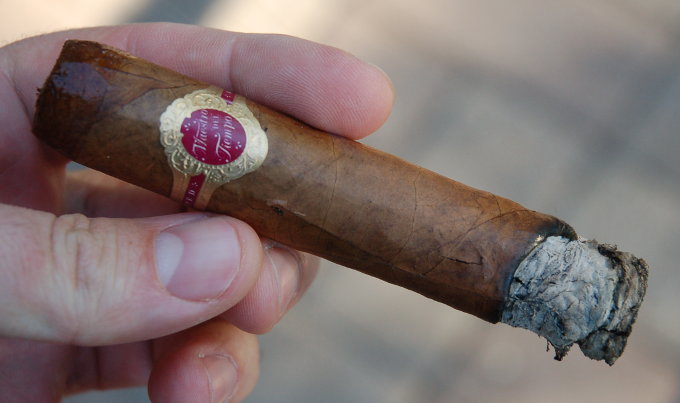 The ash is light gray, and has formed a couple large cracks. Destined to land on my lap. On the subject of cracks, another crack has formed in the fragile wrapper leaf. But it is smoking OK, offering plenty of honey, nuts, and pepper. And the burn has evened out, so that’s good too.

Smoke time is 30 minutes. We are on pace for a solid hour and a half smoke from this 4.5″ stick.

The flavors are shifting. The pepper has dialed back substantially. I can retrohale without sneezing. The citrus and honey have evolved into a sweet Earl Grey tea flavor. A good amount of nuttiness joins it. There is also a light vegetal component as well. A mild celery flavor. 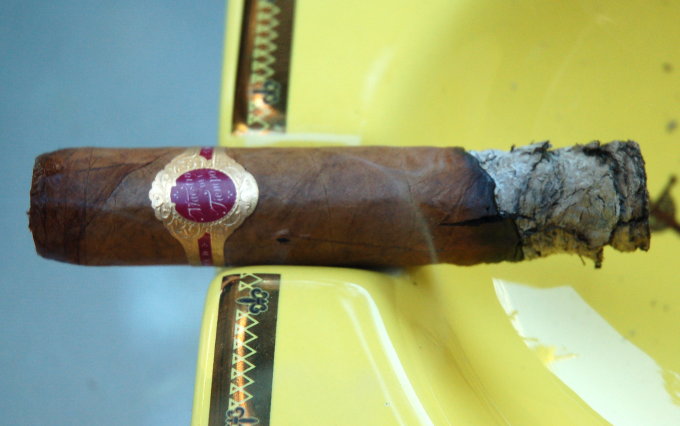 Strength is continuing to build. I feel light headed. Shit we aren’t even halfway through this thing. My brain is sloshing about in cerebrospinal fluid. Each box should come with a subscription to Life Alert. Or at least a waiver. Good thing I recently updated my will. My cat gets everything.

The burn continues to do some funky shit. It could be trying to self correct, so I’ll give it another minute and then it’s time for triage. Here’s what I’m talking about: 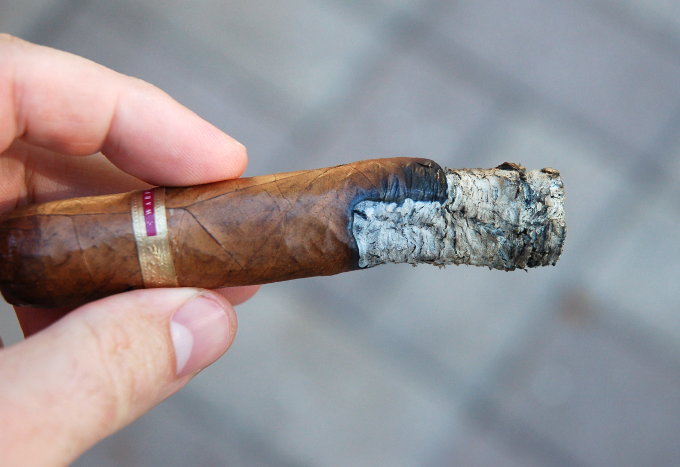 I hit the high spot and knock away an inch and a half of ash. The aroma is a distinct honey. I’m getting floral notes both on the draw and through the nose now. The flavors are pleasant, almost mild, and belie the strength of this cigar.

Here are the flavors: light cream, honey, nuts, mild citrus, tea, flowers, graham crackers, and a little pepper. Resting smoke pours from the foot. Lots of smoke with each draw. 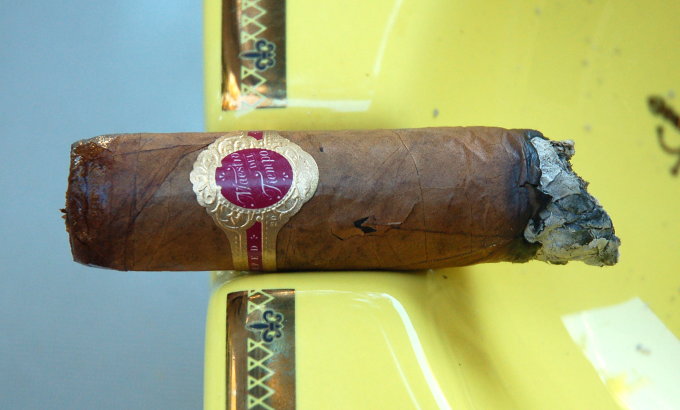 A tear in the wrapper near the band has opened up. In defense of this blend I haven’t had that happen before. I think this particular cigar is slightly overfilled. It is crammed full of tobacco. An extremely robust robusto. 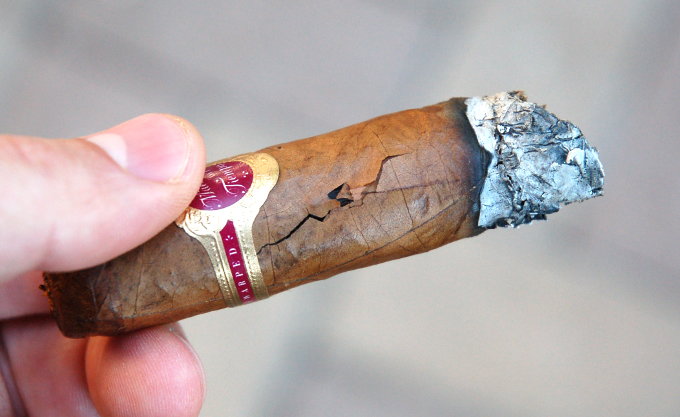 Leather emerges. Thick oily leather. Smoke pours forth from the tap. The tea flavor has grown stronger. The blend is getting darker.

Speaking of dark, I’m reading The Black Dahlia. Odd book. I’m a fan of noir fiction, having read all of Raymond Chandler’s work and the Maltese Falcon, but this book as a decidedly different tone. I’m about 75% of the way through this novel and it twists and turns. It seemed to stall out for a moment but then it grabs you. It’s good but has left me with mixed emotions. Kind of like this cigar, which is attempting to shed its skin.

Right now the flavors are black tea, a little honey, citrus, and roasted nuts. Beneath the light brown wrapper is a dark, almost black binder. A true wolf in sheep’s clothing. I’ll do my best to finish it for you gentle reader, but my brain is scrambling in the strength.

The last time I had one of these cigars I had to lay down in my zero gravity chair. My girlfriend was watching me from inside and commented about it when I stumbled in after I was done. It’s a strong cigar. Girly men like me need not apply. 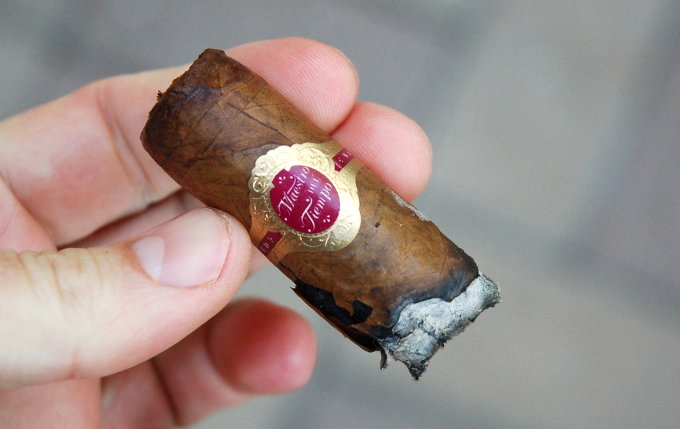 OK, I had to go inside for a few minutes. I had a teaspoon of honey and a glass of water. I still feel woozy, but I’m doing better. The cigar went out, but I was gone for a good 10 minutes. I knock away the ash and reboot the cigar. I have two inches of cigar left, and maybe an inch left to smoke. Under non-review conditions I would have left it at that, but will soldier on in a profound display of duty and selflessness.

After a blast of pepper from the relight, honey and tea settle back in. The pepper lingers in my nose. Smoke pours from the giant crack in the side of the cigar. Again, this isn’t typical based on the other cigars I have smoked, but it’s happening now so I’ll write about it. The cigar band is acting like a belt, holding it together.

Here’s a snot of the band. Looks really cool: 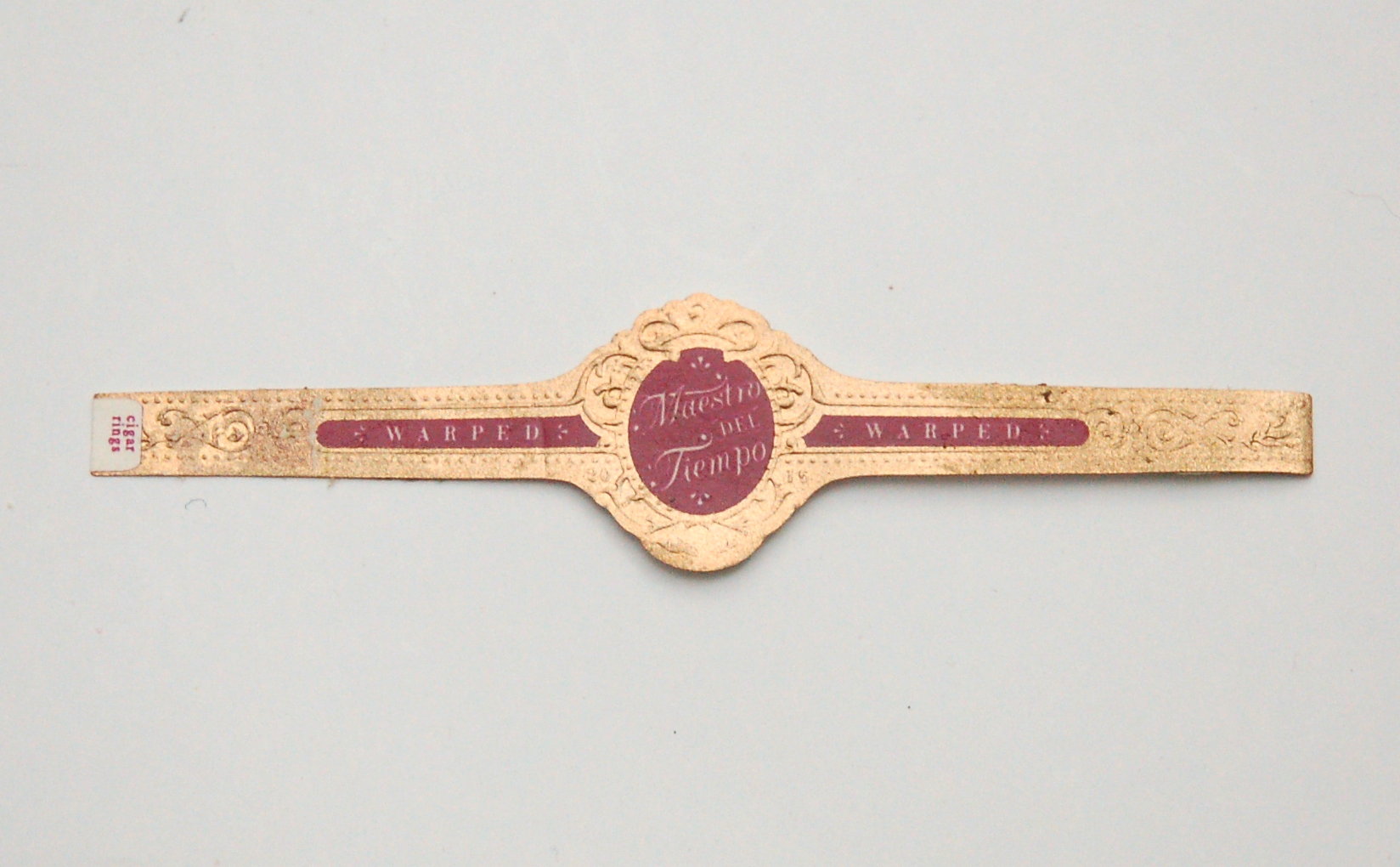 The leather I noted earlier on in the final third has returned. It’s pungent and goes well with the black tea and pepper. The cigar is attempting to self destruct. Bursting at the seams. It is growing hot and squishy. I think the best of this cigar is behind me. I decide to end the review. 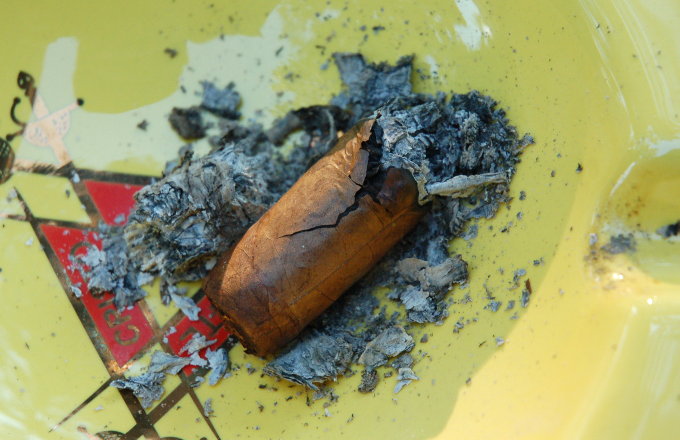 If you skipped through the body of the review to get to the summary, I don’t blame you. Here is what happened: pleasant honey, nut, and tea flavors were the common thread. I almost died from a nicotine overdose in the final third. It is extremely strong.

Construction was poor on this particular cigar. The other cigars in my 5 pack smoked better than this, and there was a small crack in the wrapper near the band that ended up opening up on me. But a crack also formed near the second third on its own. It’s a densely packed cigar in this robusto vitola, and it requires careful smoking for it to burn evenly. I had 5 months of rest on this cigar and it was stored properly in the cello.

It’s a very strong blend in my book. Too strong for my delicate sensibilities. I enjoyed the flavors, which were unique and memorable, but could have done without the overwhelming amount of nicotine.

At the end of the day I don’t see myself buying this again. At least in this vitola. They offer this in a lonsdale, and that may have been a better choice for me. Nice flavors but too much nicotine for me to truly enjoy.

Notice I caveat this with “me”. This is just my take on it. Plenty of people like this blend, but I’m giving you my personal take on it. I’m not going to pretend like everything was OK. I almost passed out and the cigar fell apart. That’s what happened. I hope my experience was atypical. I know the construction issue was. I liked the flavors, but the strength got in the way. If you like strong cigars then you may very well end up loving the Maestro del Tiempo.

Final Score: 3.5 / 5 or a “0” on my 0-2 scale. I wouldn’t buy it again. At least at this point in my cigar smoking journey. I have a couple left in my humidor and it’s likely I will eventually smoke them. And probably update the review.

I recommend purchasing the Warped Maestro del Tiempo at Famous Smoke Shop. Please consider that purchasing things through any of the links on this website, including Amazon.com, helps support the website and keeps it going. Any and all support is greatly appreciated. Thank you very much.